I declare it immediately, JavaScript is my favorite programming language. Along with JavaScript in the last three years, PHP has gained the second position in my heart, mainly thanks to my job. However, I currently use both of them at work: JavaScript within the NodeJS runtime and PHP within Apache webserver.

IMHO Apache + PHP is simpler for a newbie programmer, NodeJS is a little harder due to its asynchronous architecture. In few words, Apache manages a request forking a process and assigning it to the request, NodeJS, on the other hand, has an event-driven architecture which allows it to be able to manage concurrent requests with a single main thread called the event loop. The event loop manages all the requests but delegates IO tasks to other threads.
The asynchronous approach could be harder to understand and if not properly managed could generate a mess in the code (the famous callback hell). However, when you start to rule the event loop properly, NodeJS returns back great satisfaction. I advise you to have a look at the async/await syntax if you are not familiar with it.

I have heard and read many times this sentence NodeJS is super fast, so I have decided to test its performance, and I'll show you the results, comparing it with Apache + PHP stack.

The tests consist of a series of calls bombing, raising progressively the concurrency level in order to analyze the behavior of the server.

The requests belong to two categories:

The KPI under observation are:

The environment for the test is made up of:

The Docker containers run on my laptop, a MacBook Pro (13-inch, 2019, Two Thunderbolt 3 ports) with:

The Docker images use the official versions of NodeJS and Apache, no tuning is allowed.

The NodeJS runtime is designed very well to manage requests which involved IO operation, thanks to its asynchronous model.
In fact, NodeJS was able to increase the managed requests per second in accordance with the increasing of concurrency level. 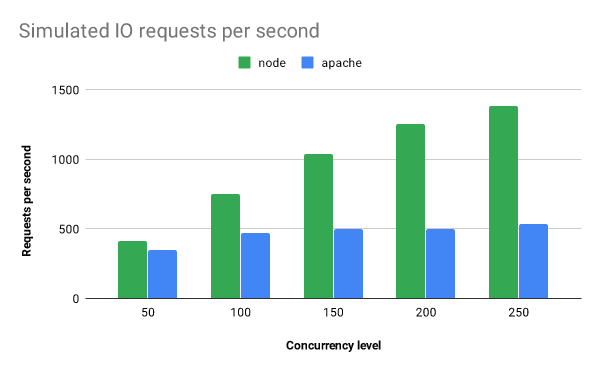 In the CPU task, both technologies reached the maximum result with the minimum concurrency level. 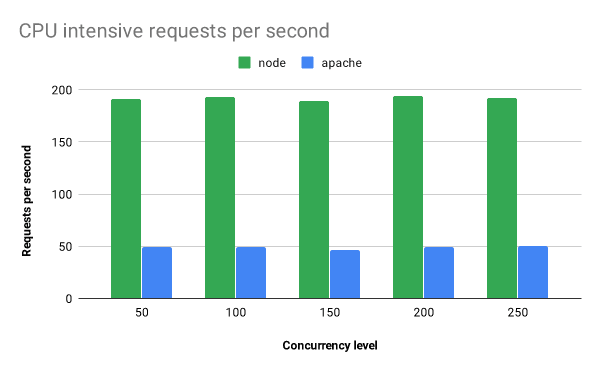 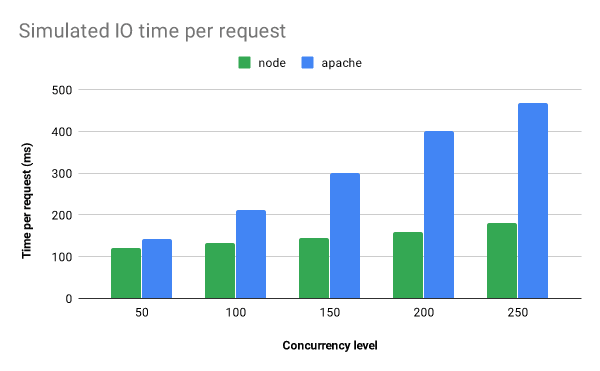 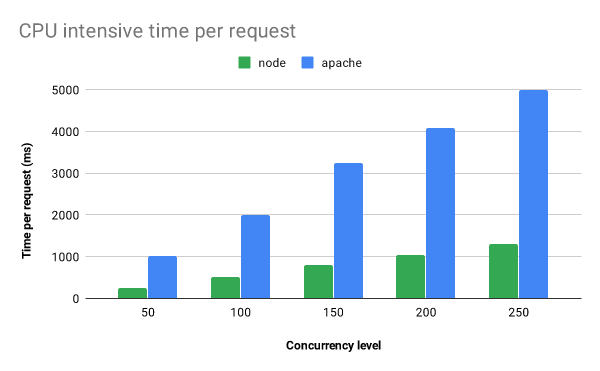 The response time is almost the same with the lowest concurrency level, but with 250 concurrent requests, NodeJS was five times faster than Apache.

In this scenario is visible the maximum time waited by a user.
Analyzing the results with the maximum concurrency level: 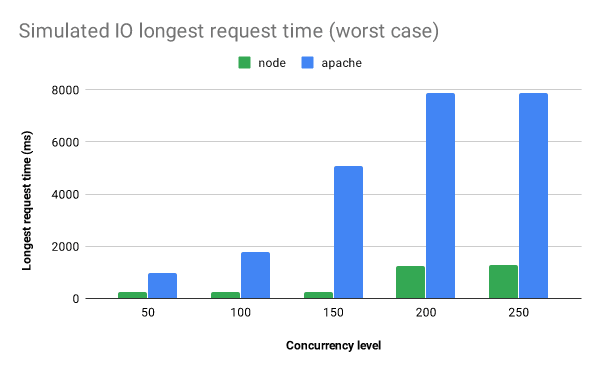 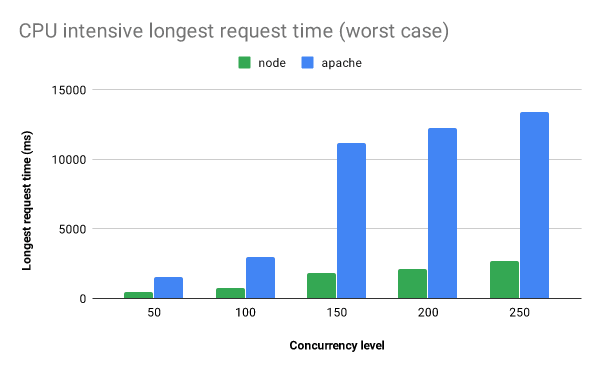 ...and the winner is...NodeJS.
Yes, it's true, NodeJS is superfast! Now I have the proof.

For code details have a look here:

Performance test of a NodeJS server vs a PHP Apache server

emilioSp
console.log(‘Hi!’);
Music Monday — What are you listening to? (Rock Edition 🤘)
#watercooler #music #discuss
What is your favorite way to learn?
#discuss
Why your GitHub profile should stand out?
#github #beginners #career

Once suspended, emiliosp will not be able to comment or publish posts until their suspension is removed.

Once unsuspended, emiliosp will be able to comment and publish posts again.

Once unpublished, all posts by emiliosp will become hidden and only accessible to themselves.

If emiliosp is not suspended, they can still re-publish their posts from their dashboard.

Once unpublished, this post will become invisible to the public and only accessible to emilioSp.

Thanks for keeping DEV Community 👩‍💻👨‍💻 safe. Here is what you can do to flag emiliosp:

Unflagging emiliosp will restore default visibility to their posts.