This post is in no way meant to brag; it’s meant to provide insight into quick social media growth.

In the last eight months, I’ve gained about 42,000 followers, and people always ask me how I did it. So I’m here to break down the things I did which ultimately gained me a following (specifically on Twitter).

Let’s start with some analytics and break down followers gained and top tweets.

This was the first month I gained a lot of followers. I attribute this to my top tweet of the month getting liked or retweeted by someone with a following.

Another great month for gaining followers, I found that my tweet about impostor syndrome struck a chord with others in the industry. 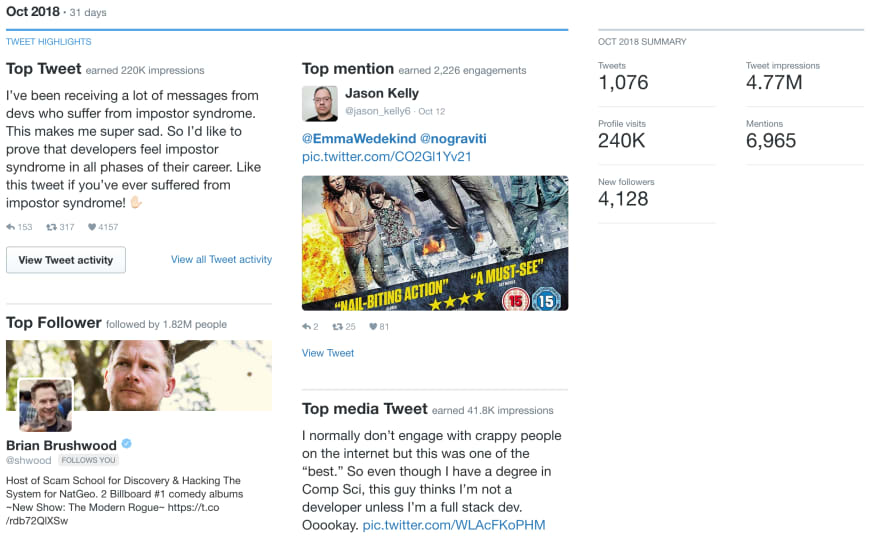 November, my top tweet centered around job interview rejections. Again, a topic that's extremely relevant to all developers, but which doesn't seem to be talked about much.

This was my biggest month in terms of gaining a following. With 9.4k followers gained, my top tweet this month was a SQL parody/Christmas picture I posted. And while the nearly 20k likes on this tweet got me a lot of traffic, it also got me some unwanted attention. 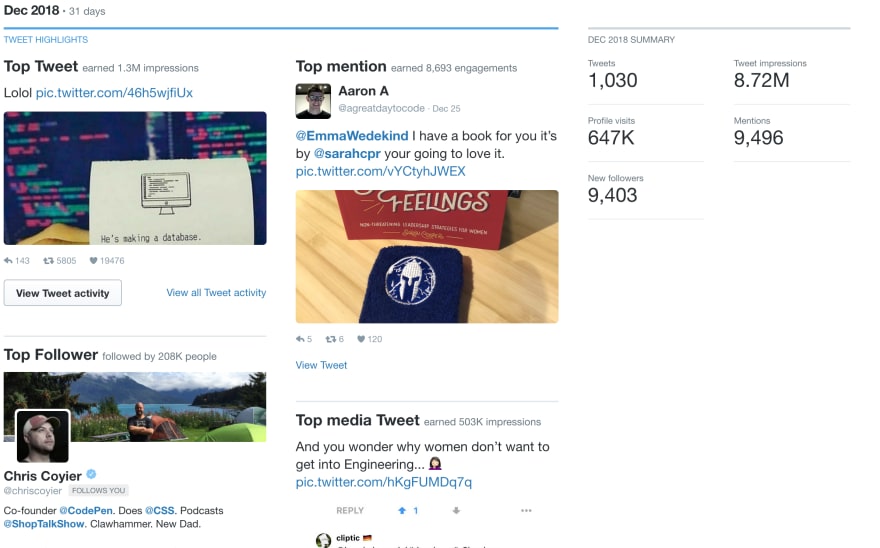 January also saw some great growth in terms of following. My top tweet this month focused on embarrassing things we've done in our day jobs. Some of the answers were extremely entertaining. 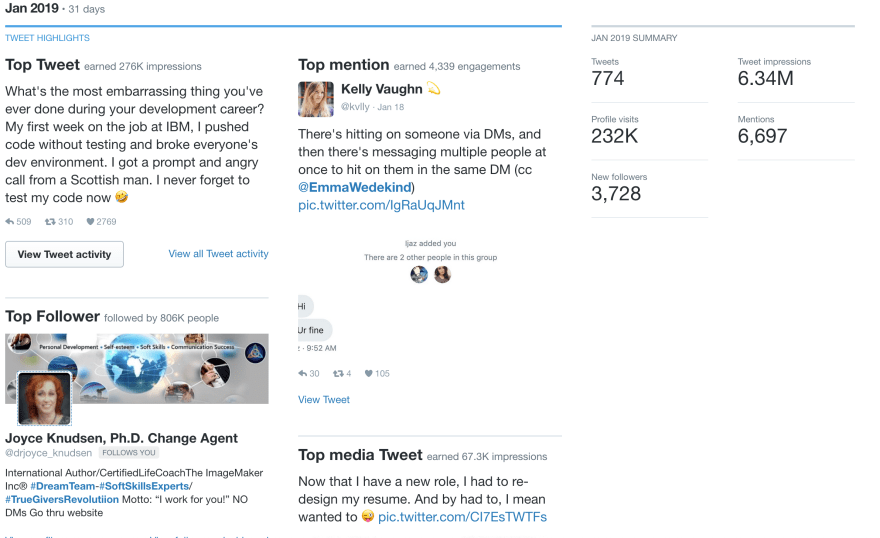 In February I gained around 2,000 followers. The Regex Cheat Sheet I made got a ton of traction, thus leading to some new followers. 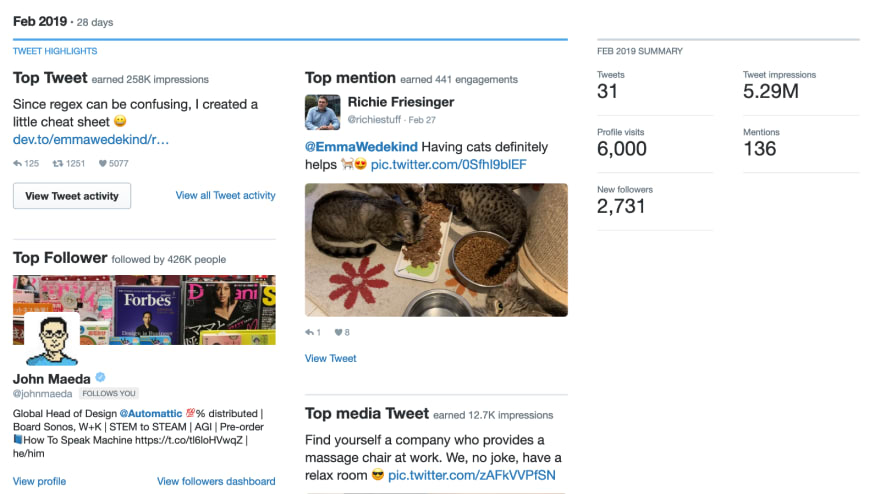 March saw almost 4,000 new followers. My most popular tweet was in regards to the strength it takes speakers to present in a foreign language. It resonated with quite a few people. 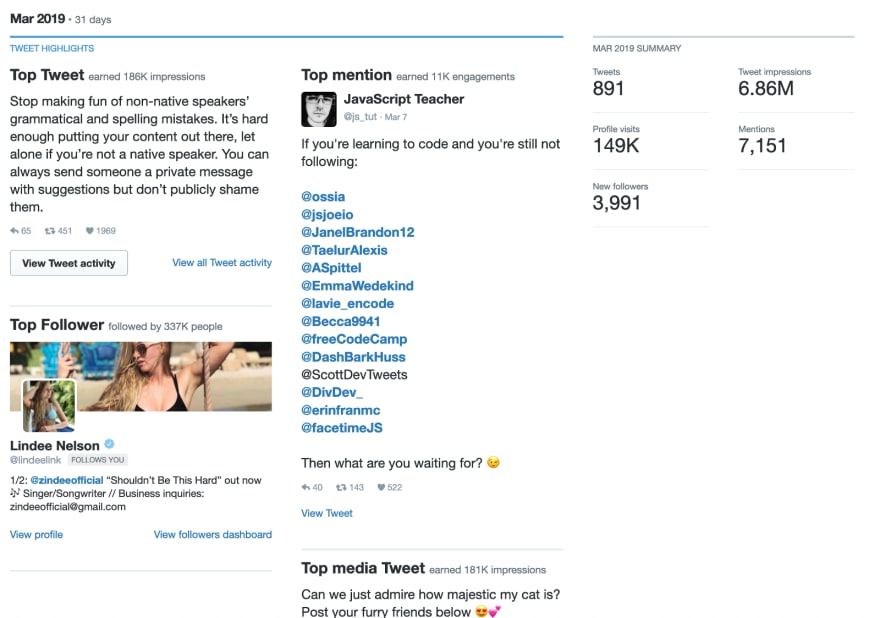 April was a big month for gaining followers. I gained over 7,000. This was largely in part to a stupid tweet I posted about wearing headphones without listening to music, simply to ignore other humans. I will never understand the Internet. 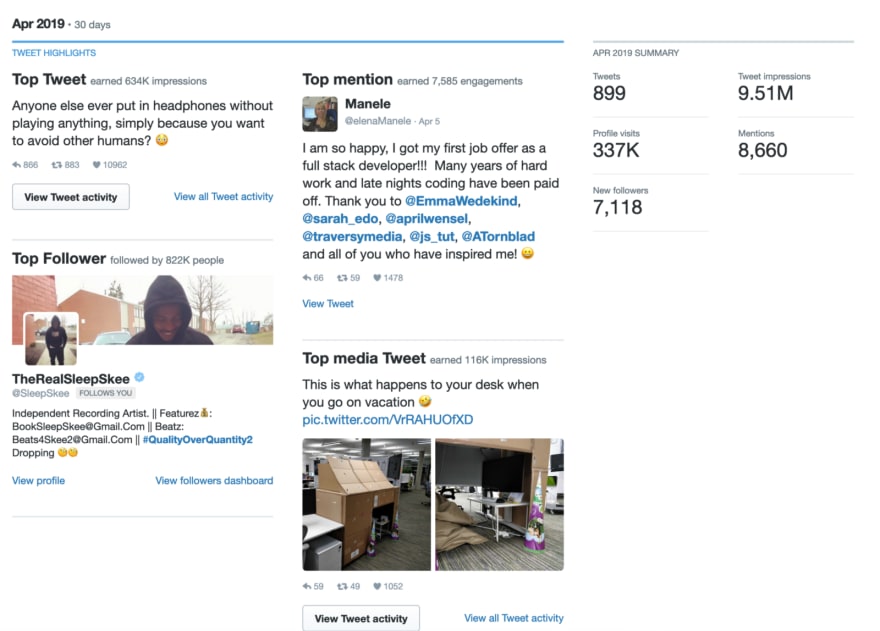 It’s currently May 10th, and I’ve already gained about 2,200 new followers. I posted this amazingly hilarious photo of a possum. I still giggle every time I see it. 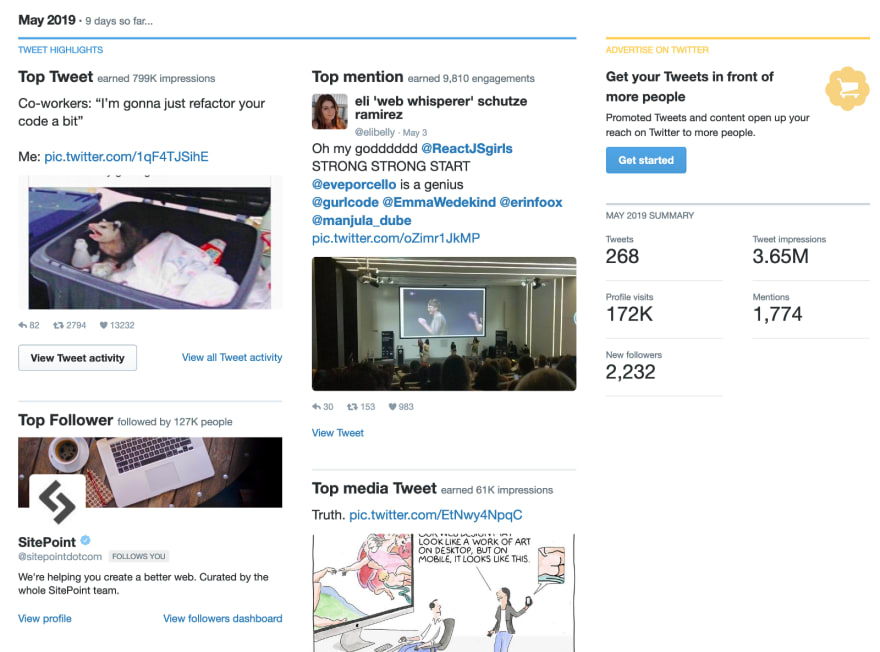 June was a huge follower-gaining month with nearly 7,000 new followers, and I attribute this primarily to my most liked tweet which received over 6,000 likes. 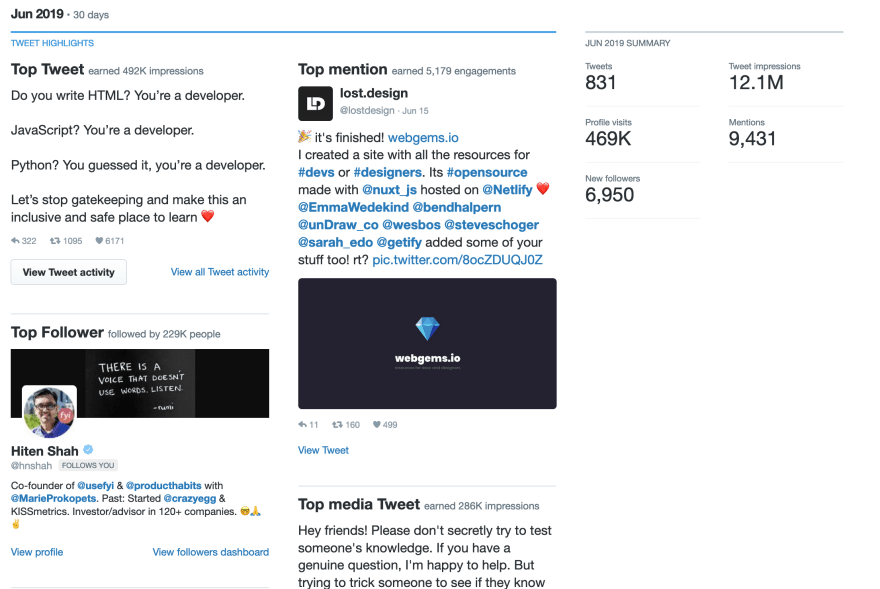 It turns out that tweeting about how great CSS is is a popular way to get a few likes. Who knew 2,900 others also enjoy Cascading Style Sheets? 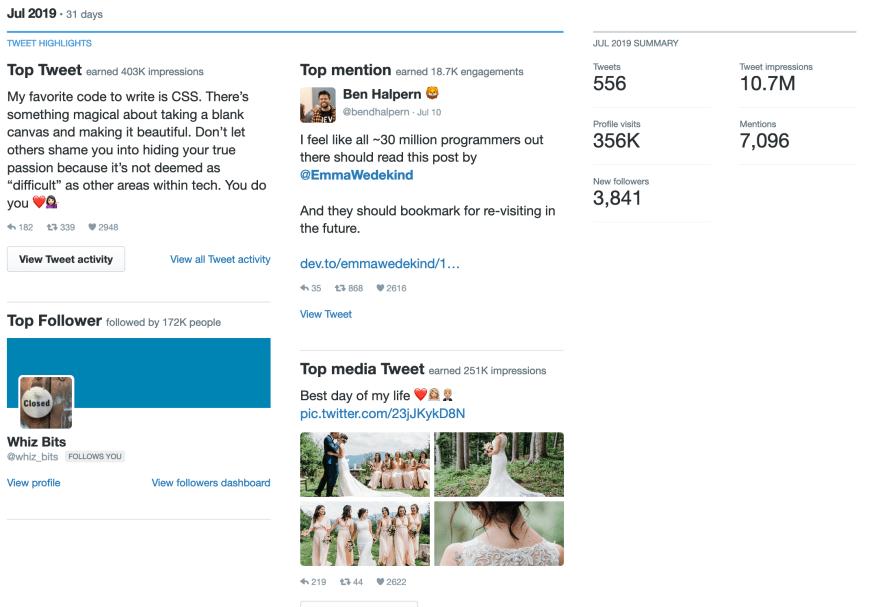 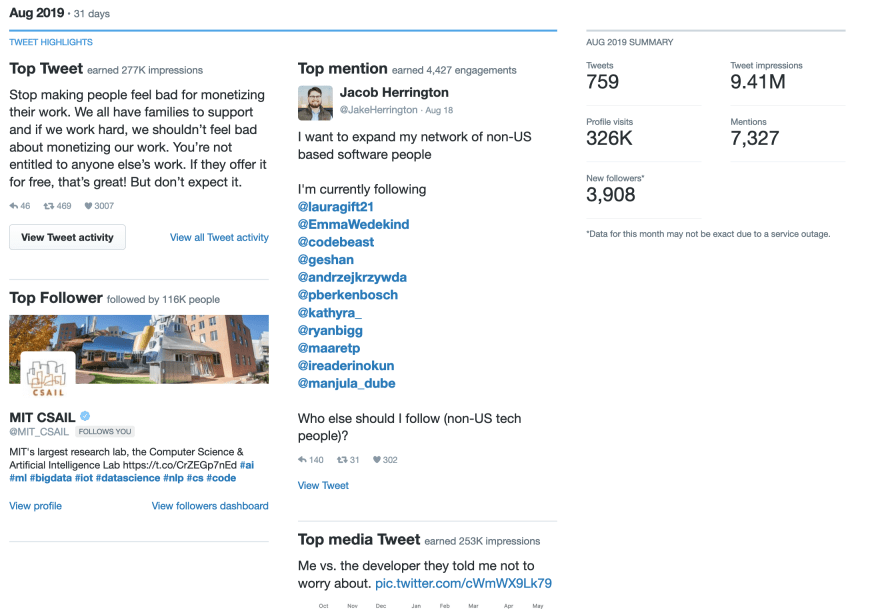 And ending the year-long journey we return to September, where my top tweet had over 8,000 likes. I gained a notable follower, Smashing Magazine, who I must say I fangirled over a bit. And I gave my first live-coding conference talk in Amsterdam, leading me to an additional 3,500 followers. 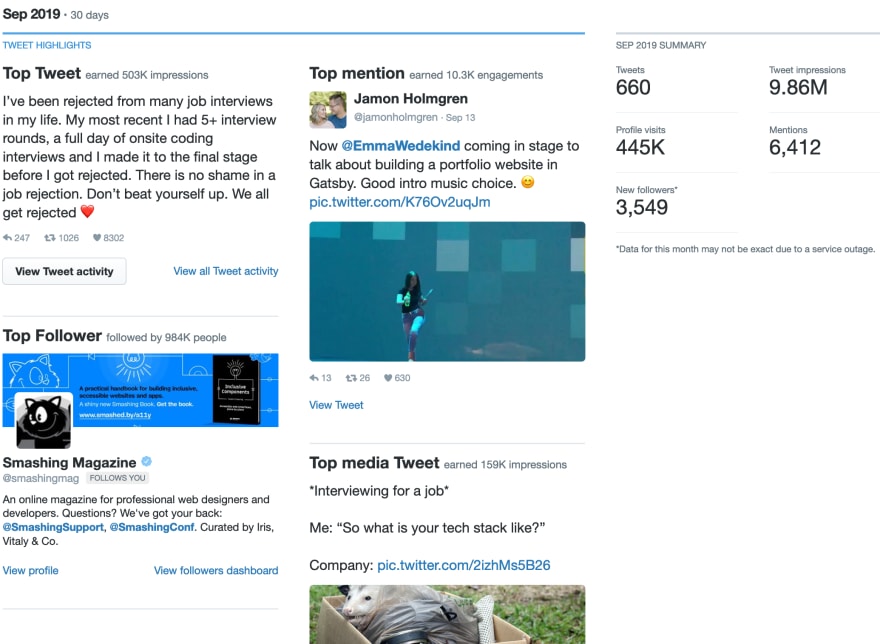 So now that we've explored the follower breakdown, let's take a look at some of the things I did to gain a following.

I want to note that follower count, by no means, should have an effect on your self-worth. And while I had quick growth, it often takes years for people to gain a following. So please take these tips with a grain of salt.

The biggest piece of advice I got from my co-worker Kahlil Lechelt was to post consistently, even if no one is listening. In general, people don't get popular overnight; it takes time. The more you post, the bigger your backlog of content becomes. And people enjoy following others with large amounts of content.

Interact With The Community

I try my hardest to respond to every message I receive and to interact with people. This has proved invaluable. People want to know that you're listening to them. When I have a positive interaction with someone in the community, I tend to value their tweets just a little bit more.

I try to tweet things that are relevant to all, and I don't always sugarcoat everything. I'm not sure why more developers aren't vocal about failing a job interview, or struggling with impostor syndrome. These issues affect nearly all developers and talking openly about how it affects me has greatly impacted my following.

You should never try to be someone you're not (in person or online). If you get popular from posting things that don't reflect who you are, you gained popularity for the wrong reasons.

I firmly believe that you should create the content that interests you. Whether that's through blogging or making video tutorials, find the platform and the topics which interest you. If you don't enjoy writing or speaking about the topics you create, no one will enjoy reading it. And just because a topic has been blogged about previously doesn't mean you shouldn't create content in that subject area. People learn in all different ways; perhaps your content will reach a developer who was previously struggling in that area.

I've seen several tweets that set goals to reach a certain number of followers, yet I urge people to not focus on the numbers and instead focus on the quality of the followers you receive. If you're always chasing numbers, you'll never be happy (whether that's with weight loss or follower count). Focus on the meaningful interactions you have through social media platforms.

While I am totally in awe of the growth I've achieved on Twitter, it's not without its drawbacks. If your goal is to grow your follower base, please be aware that it's not all rainbows and butterflies. Below are some of the issues I struggle with each day.

I spend a vast amount of time interacting with the community (upwards of 4 hours a day). It can often feel like a full-time job. And this takes a toll on my mental health. It also means that I spend less time doing other things such as exercising, writing blogs, and reading.

Gaining a following increases the amount of negativity and rude comments you'll receive. This is something I struggle with. I am a people pleaser that hates conflict. I'm still learning to deal with the negativity.

I love creating content, but recently I've been feeling pressure to push as much content out as I can. Yet as a result, the quality can suffer, as well as my mental health. Learning to prioritize is something I struggle with each and every day.

Gaining a following is an amazing feeling. To know that there are 42,000 people out there reading my content is simultaneously terrifying and thrilling. If your goal is to gain a following, I hope these tips helped. But remember whether you have 20 followers or 10,000, you should never sacrifice your mental health or values.