Node-RED is a programming tool for wiring together hardware devices, APIs and online services in new and interesting ways.

It provides a browser-based editor that makes it easy to wire together flows using the wide range of nodes in the palette that can be deployed to its runtime in a single click.

This article will introduce the complete operation process for accessing the MQTT server by using Node-RED, filtering and processing the MQTT data before sending it to the MQTT broker. Users may quickly understand how to use Node-RED for simple stream processing of MQTT data.

Node-RED, installed either on your PC, or devices such as Raspberry Pi, or cloud servers, can be quickly installed and used. Here are two common methods for installation:

Use npm for global installation:

Use Docker for installation:

If you use npm for global installation, and after you are prompted that the installation is successful, you can start the Node-RED immediately by simply running the node-red command globally. 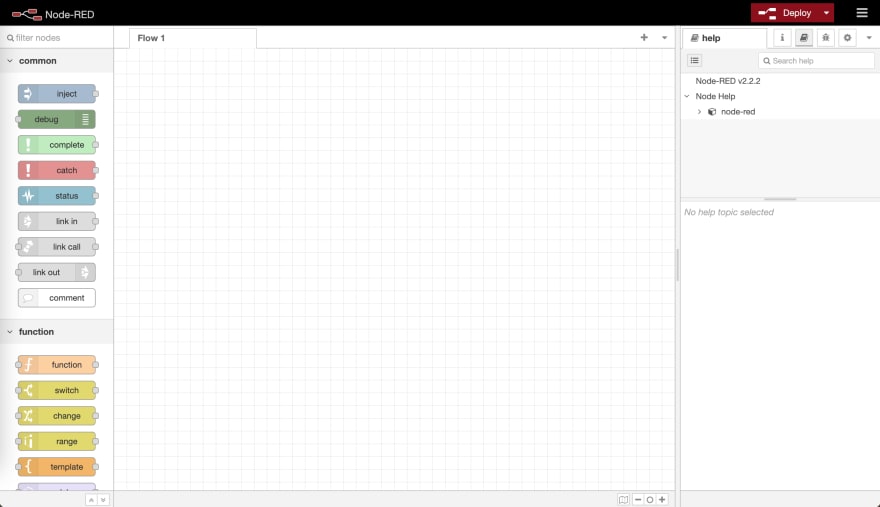 Use MQTT in Node-RED

This article will introduce the free public MQTT broker provided by EMQ, which is created on the basis of MQTT Cloud - EMQX Cloud. the access information of the server is as follows:

First, drag and drop a node of MQTT into the page in the menu bar on the left. After double-clicking the node, a configuration page for editing MQTT node will appear on the right, then create a new connection information according to the content prompts, fill in other connection information of MQTT, and click on the Done button to save the node information. 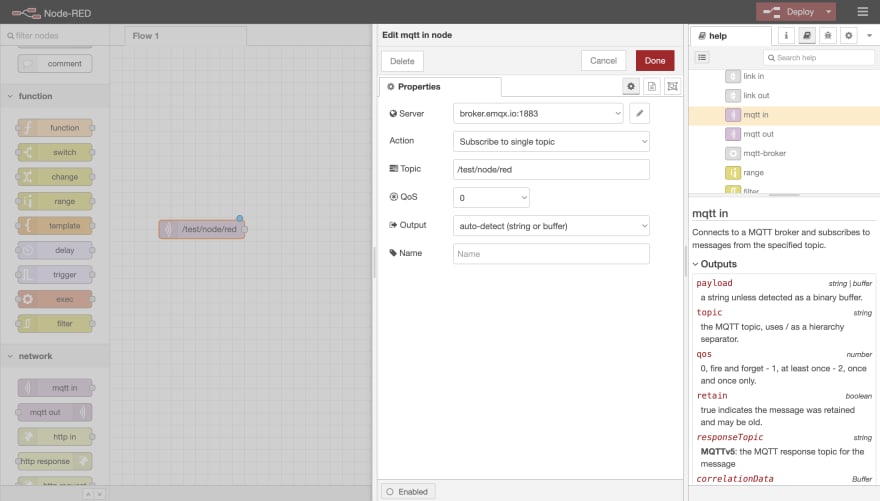 Data access: Drag and drop a JSON node into the page, and we can configure an Action in the configuration page of JSON node. Then we set it as Always Convert to Javascript Object. As we can't be sure whether the received data is a JSON format data or a JSON string, the first step is to perform JSON conversion on the received messages. After configuration, we connect this node with the MQTT in node. 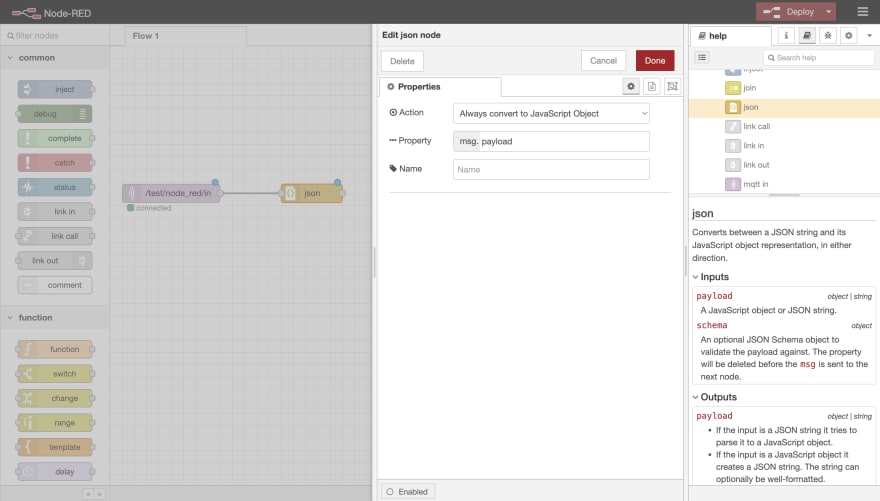 Data filtering: after we configure and format the received message data, drag and drop a filter node into the page. After double-clicking the node, configure the rules in the configuration page. Select a Mode first and set it as a block unless value changes. The filtering rule is that the value of the currently received data needs to be changed. At present, the data is in JSON format, and what we should judge is a certain value in the JSON data, so we need to set the value as msg.payload.temperature in Property. After the configuration is completed, click the Done button to save the configuration of data filtering node, and finally connect the node with the JSON node after the previous configuration. 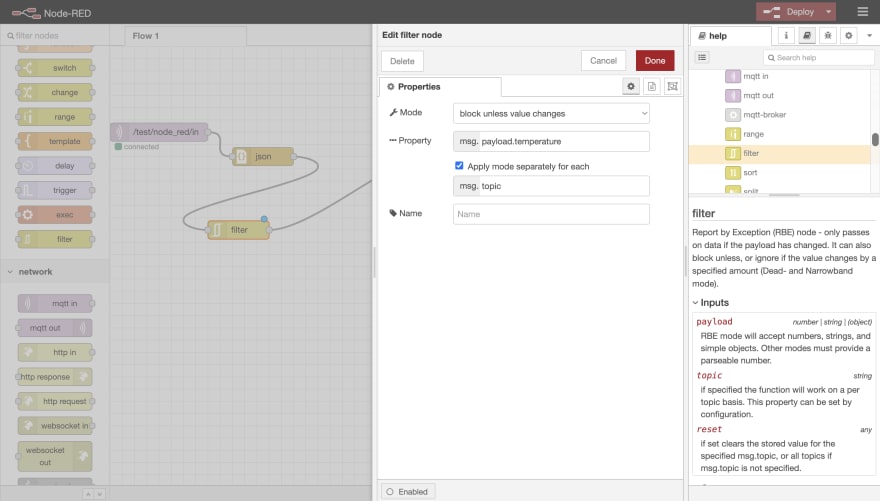 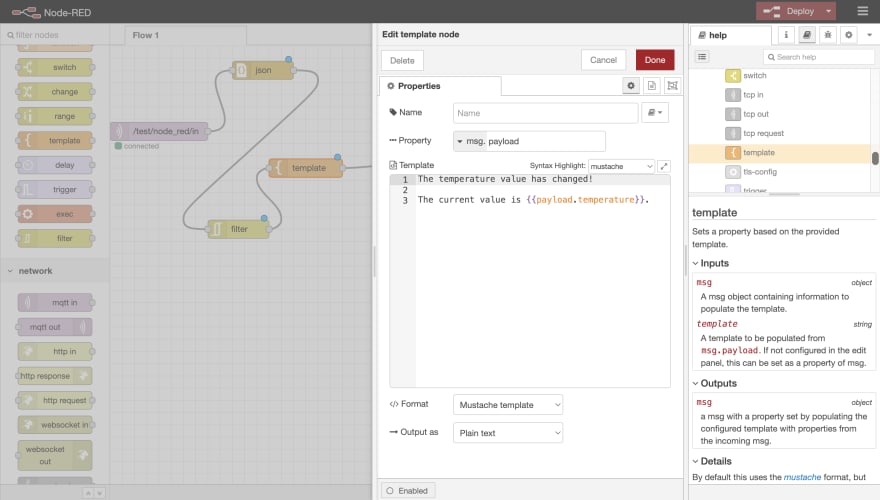 Finally, send the processed data by MQTT after the above data processing and filtering, drag and drop an MQTT out node into the page, fill in the same connection information as MQTT in node, configure a Topic for users to receive data, save it, then connect it with the template node, and click the Deploy button in the upper right corner to deploy the current rule application online. 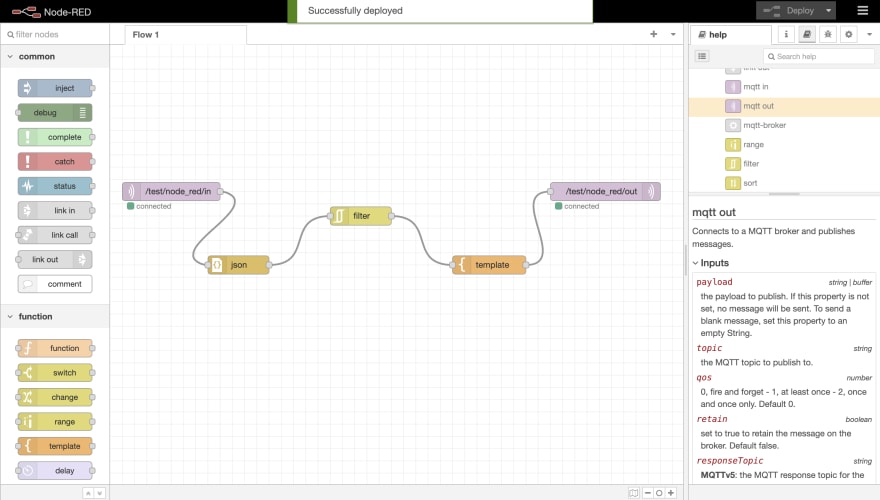 After finishing the function arrangement of the whole stream data processing, we use MQTT 5.0 client - MQTT X to test and validate the usability of this function. We create a new connection, connect it with the MQTT cloud service address previously configured in Node-RED, and then enter the Topic in the MQTT in node to send a message, so that Node-RED can receive the MQTT data we have sent.

Then we subscribe to a Topic configured in MQTT X node to receive the processed message data. When a message data containing temperature and humidity information is sent, we can receive a message sent according to the message template we set, but we can't receive it again if it is sent again. 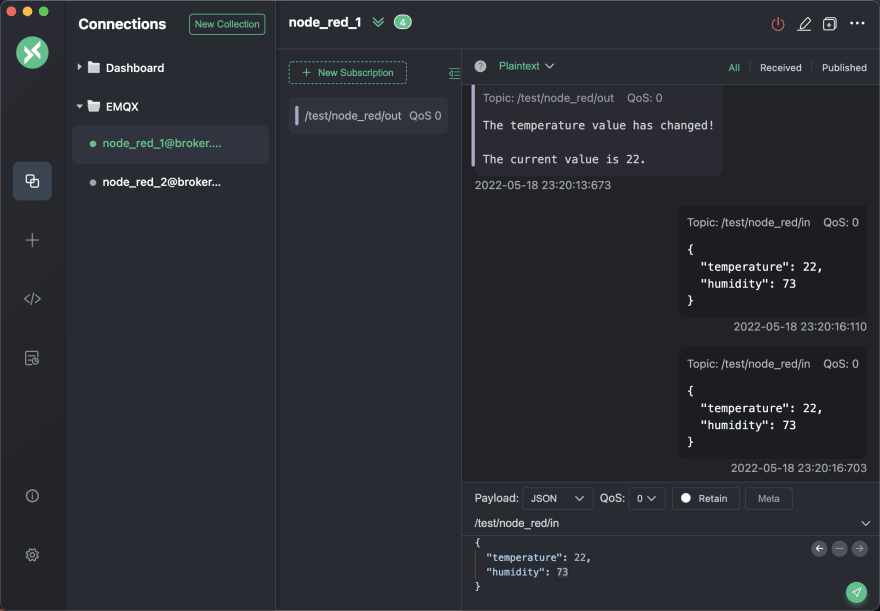 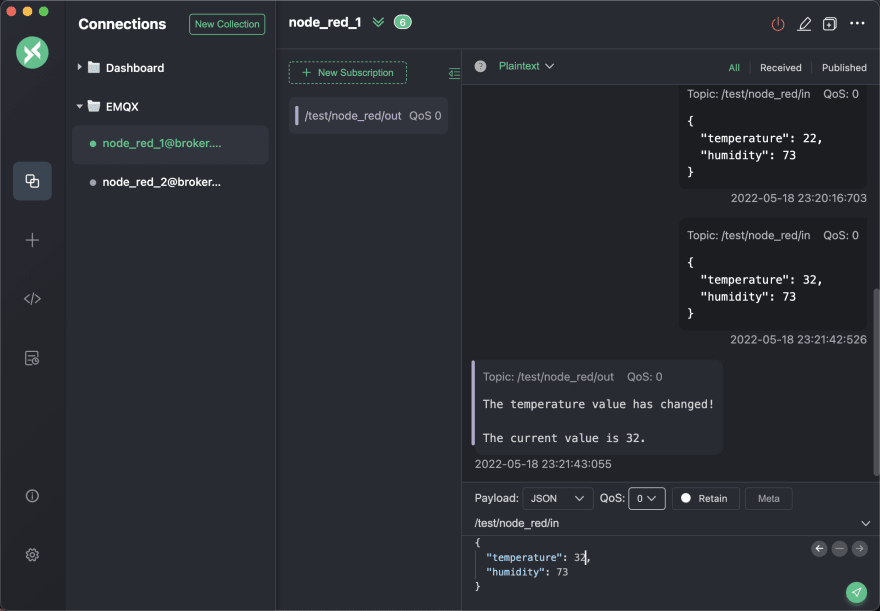 Now we have completed the whole process for installing and connecting with MQTT cloud service by using Node-RED, and filtering and processing MQTT message data, and finally sending the processed data message.

The interaction and use of Node-RED, that is, using UI to describe general business logic, can lower the threshold for non-professional developers to get started. TO use a visual tool to quickly create the required complex execution tasks, users may build complex tasks through simple node connection, which is very helpful, especially for some IoT application scenarios.

How to Append Multiple Elements at Once in JavaScript DOM

Once suspended, emqx will not be able to comment or publish posts until their suspension is removed.

Once unsuspended, emqx will be able to comment and publish posts again.

Once unpublished, all posts by emqx will become hidden and only accessible to themselves.

If emqx is not suspended, they can still re-publish their posts from their dashboard.

Once unpublished, this post will become invisible to the public and only accessible to EMQ Technologies.

Thanks for keeping DEV Community 👩‍💻👨‍💻 safe. Here is what you can do to flag emqx:

Unflagging emqx will restore default visibility to their posts.