NestJS has been my go-to Back-End framework for API development in NodeJS for quite a while now after discovering how annoying it can be to set up a NodeJS + Express application, not to mention that if you want TypeScript support, it requires quite a lot of setting up to do.

Also, I believe implementing Docker for development (and definitely for production) is a must have thing in all of my Back-End applications since it makes deployment extremely easy and predictable no matter which service it's going to be deployed to.

I'm not going to go too much in depth on NestJS or Docker since the main focus of this tutorial is to run a NestJS app environment with Docker and that's about it. I will be making a separate series about NestJS and Docker going more in depth along with best practices in the future.

In order to fully understand how the upcoming code works, you should have a basic understanding of the following subjects:

Start by installing the NestJS CLI using npm on your machine and create a new project:

When creating a new project, NestJS is going to ask you

Which package manager would you ❤️ to use?

I am going to choose npm for this tutorial, but you can choose yarn if you really want to.

After the installation is finished, cd into your new application directory and run the app like so:

Then, open your newly created app in the browser using the address http://localhost:3000 in order to make sure everything runs smoothly.

Let's create a new API service that returns a hardcoded array of movies that we can use to test our API after containerizing it with Docker.

Open the newly created project directory with your favorite text/code editor (I'm using Visual Studio Code).
Your workspace should look like something like this: 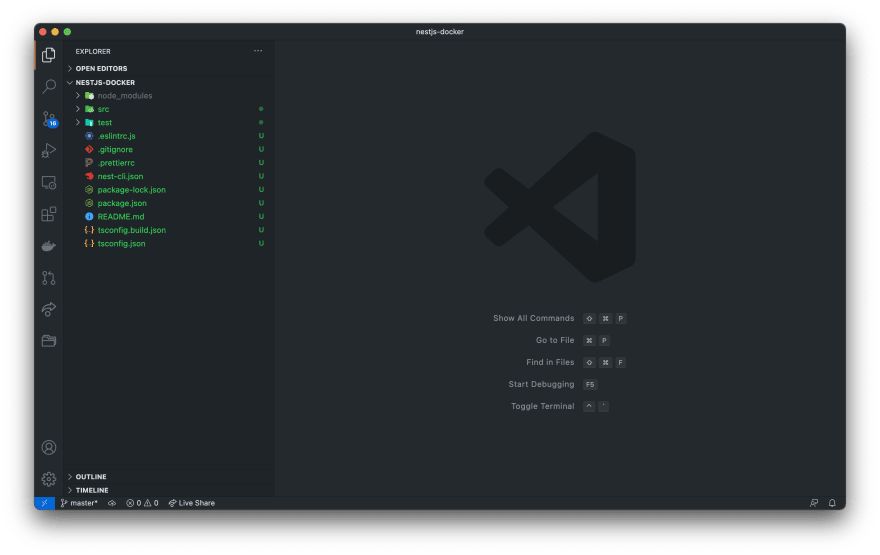 Then, open the src directory. Here the source files of the application can be found in order to start our development

Open the file app.service.ts and replace the whole content of the file with the following code:

NOTE: Adding an exportable Model (e.g. Movie) to the service class file is definitely not a good practice and you shouldn't do this under any circumstance. It's for demo purposes only. Use a different model file for your apps.

Next, open the file app.controller.ts and replace the whole content of the file with the following code:

Run the project again using npm run start:dev and open the app in the browser at http://localhost:3000 or you can use Postman and create a new GET request for a more formatted an semantic workflow.
The final result should look like this: 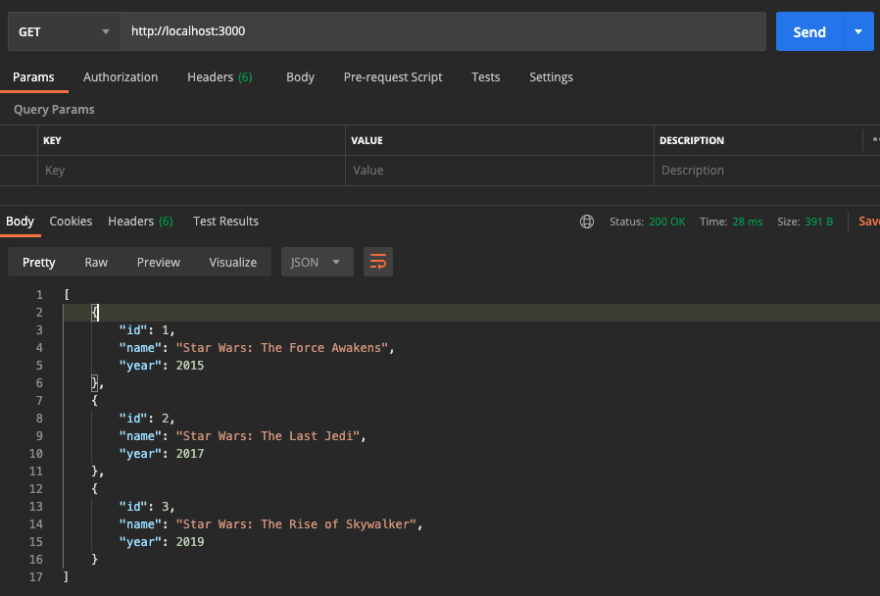 Now that we have our Back-End API app up and running, let's containerize it using Docker for development.

Start by creating the following files in the project's root directory:

Open the Dockerfile and add the following code inside:

Open the docker-compose.yml file and add the following code:

Now that we have defined our Docker files, we can run our app solely on Docker.

To start our app, write the following command in your terminal:

This will start it in development mode. We even get a file watcher when saving our files so we don't have to re-run it every time we make change 😍.

And to start our app in production mode, you guessed it... run the following command in your terminal:

Make a GET request yet again to http://localhost:3000 and... voilà! Should work as expected.

P.S: If you want to ditch the terminal logging, you can run the container in a separate daemon using the -d flag like so:

You can find the full source code right here.

Erez Hod
👨‍💻 Variables are red. Classes are blue. I love coding, how about you?
How Would You React IF I Said I Love Svelte? 🤔
#svelte #react #discuss #watercooler
What do you look for in a Code Editor?
#discuss #productivity #performance #motivation
Review my resume
#help #discuss #resume #beginners