A web developer worthy of the name must be able to create a REST API. This article will help you understand everything there is to know to build your first API using the Python language and the Django REST Framework.

API stands for Application Programming Interface, a software solution that allows two applications to communicate with each other.

In the case of web development, the application that runs in the browser called 'frontend' communicates/sends a request to the server called 'backend'

Suppose the frontend application wants the list of all the articles of a blog, it could send an HTTP request to the server.

The Django server will process this request, read the database, and return the list of articles in JSON (structured text) format. This list could then be processed and displayed in the frontend app.

How can Django know how to handle this request? In fact, he cannot. It won't know what to do with the query. That's why we need to create an API. That is a server application that will determine how to respond to different requests about a specific resource. In this case the blog posts.

Note that all requests to the servers are made via HTTP actions.

The action you want to perform on the indicated resource. Although nouns are also encountered, these methods are often referred to as HTTP verbs.

Here are the most commonly used HTTP verbs/actions

GET:
The GET method requests a representation of the specified resource. GET requests should only be used to retrieve data.

POST:
The POST method is used to send an entity to the indicated resource. This usually results in a state change or side effects on the server.

PUT:
The PUT method replaces all current representations of the target resource with the content of the request.

PATCH:
The PATCH method is used to apply partial changes to a resource.

End of the theory

The theory is fine, but it is much easier to understand a concept by putting it into practice.

We are therefore going in the following sections to create a REST API with Django.

Prerequisites: Installation of Python and Django.

The latest version of Python can be downloaded here: https://www.python.org/downloads/

Follow the instructions on this site according to your operating system (MAC, Windows or Linux)

When working on a Python project, we have to work with several libraries such as Django and Django REST Framework.

According to the date of creation of the project. It is possible for example that the Django REST Framework library is not exactly at the same version number in all other projects.

We will be using virtual environments.

Python provides you with a system that allows you to create virtual environments.

How to create a virtual environment

Normally we place a virtual environment in the project folder.

From this folder, you can now create the virtual environment that will be attached to the project

Here we run python3 with the module option venv (-m venv). env is the name we give to our virtual environment.

Once created you can activate it

That's it that's all! You now have a Python virtual environment created for your project. Normally the terminal will tell you that your environment is activated by displaying its name.

Note that to deactivate the virtual environment you must run

From the myblog project folder and with the virtual environment enabled run the following install command:

In fact from this point on, every time I ask you to execute a command in the terminal, I will assume that you are in the project folder 'myblog' and that the virtual environment is activated.

Django allows you to create a project configuration and then several applications associated with this project.

There is a Django command to create a project configuration.

The 'startproject' command creates a project configuration with the name 'config'. Point '.' specifies that we want the project to be created in the current folder

It may seem strange to you that the name 'config' was chosen for the project. In fact, it makes sense, because it is about the configuration of the project.

The 'config' project is only the configuration part. To add functions to your project, you must create one or more applications.

To do this, run this command:

The 'startapp' command creates an application with the name 'posts'. It is in this application that we will create our API.

The 'config' project and the 'posts' application have been created with a folder structure and files.

Here is an example of the files created: 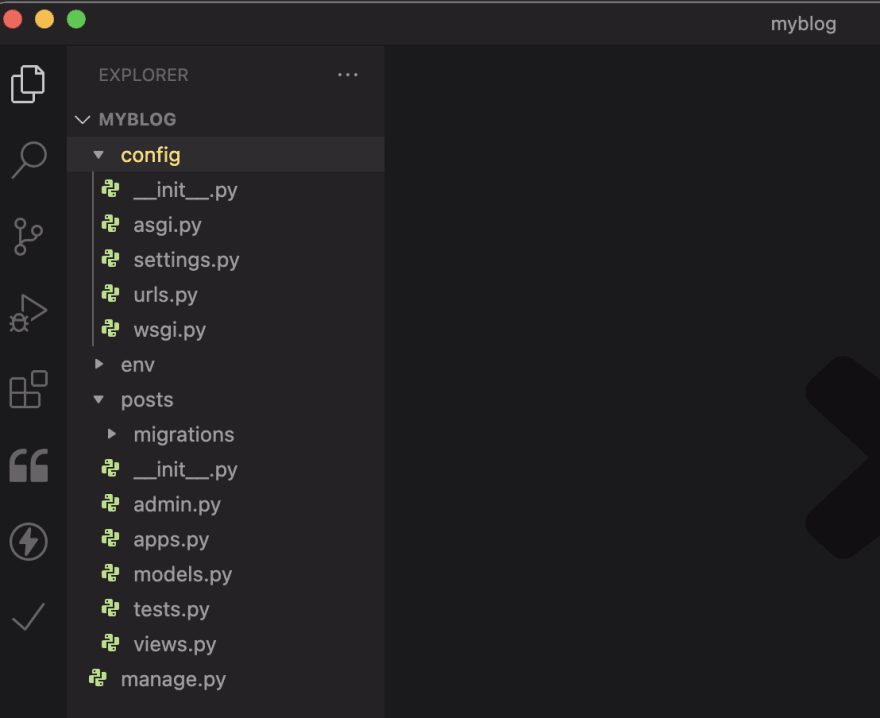 All of these folders and files might sound like a lot, but don't worry, they are there to simplify application development. I will explain them in due course.

Last little point, we need to add the following lines of code to the project configuration file 'config' settings.py

Here we indicate to the project that we want to use these three applications.

Creation of our first API

Open the 'models.py' file in the 'posts' application folder and enter the following code

Note that with each Django project there is a User model and authentication libraries created automatically. The User model contains among others the fields: username, email, first_name, last_name, and password.

We use 'User = get_user_model()' in order to retrieve the reference to this model.

Finally, this 'models.py' file will serve as an instruction for Django to create a database that will contain a table and fields with the same definitions as in this file.

Once the migration file is created, we can run it and Django will create a database with the instructions contained in the migration.

The command to start the migration is as follows:

Finally, it is necessary to create our first user. Django provides us with a command to create a superuser

This command will ask you for the username, email, and password to then create the user

In order to make sure that everything we have done has worked, start the server and visit the Admin Panel

The runserver command will launch a Django server 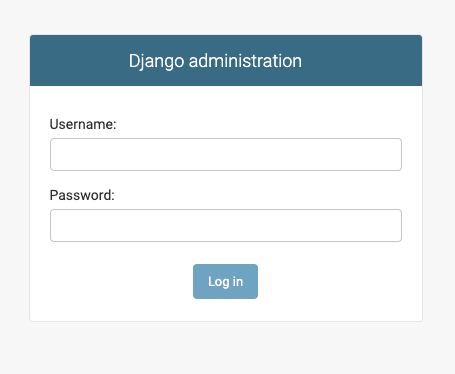 Then you should see a page with the Groups, Users, and Posts tables

Understanding the logic of Django rest-framework

What do you want to create as an API?

The API we want to create is in fact an interface to read, create and modify posts

Here are the 6 actions and URLs we want to create:

The exchange of data between the backend and the frontend is done in structured text format in JSON format.

The rest-framework, therefore, provides a object for the conversion between the Django format and a JSON compatible format. This conversion uses the Serializer class.

The first step is therefore to create a serializer. To do this create a file named serializers.py under the application posts folder and add these lines of code:

There you have it, it’s no more complicated! In fact, most of the work is done by the rest-framework library. Here, we just have to mention which template and which fields we want to use for the API.

Once the serializer is created, nothing prevents us from creating the API for the Post model

Using the ApiView class is the longest technique to create an API, but it allows for a great deal of customization. If you have special needs, the ApiView is your option of choice.

Using the ViewSet class is the fastest technique to create an API based on a Django model linked to a database. The ViewSet class will create for you the 7 actions most often used when creating an API: list, create, retrieve, update, partial_update, and destroy. It is therefore much faster than creating each action manually as with the APIView. On the other hand, if you have very specific needs, it will not be possible to customize your API as much as with the APIView

Since we are going to create an API based on a Django model and it will be without much customization, I chose to use ViewSets.

From the views.py file in the posts application folder. Enter the following code:

Again, you have a demonstration of the strength of rest-framework. Just create a view based on the 'ModelViewSet' and then specify which serializer is and where the data will come from.

With this simple code you will have access to 6 actions all inherited from ModelViewSets and its 6 equivalent methods: list, create, retrieve, update, partial_update, and destroy

Once the 6 views are available via PostViewSet, you must create a URL path for each of the 6 views.

We have the views now there is only one step left and that is to create a URL path to access these 6 actions.

Again, no need to create 6 routes manually, rest-framework provides us with the Router class.

Create a urls.py file under the posts app folder

This code will create the following 6 URL path:

All you need is to connect these roads to your project. To do this, enter the following code in the urls.py file under the config project

The routes created under posts / urls.py will all be used under the URL API /
Ex. Api / posts

Finally, it's time to test everything by launching the server

This page is created automatically by the rest-framework in order to allow you to test your API.

If you click on the API "posts". Another page will open with the list of all your posts 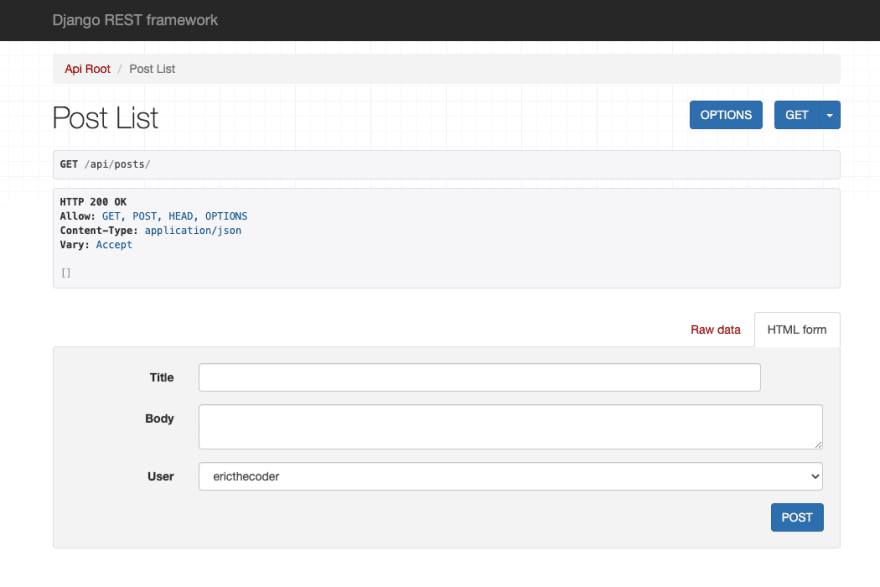 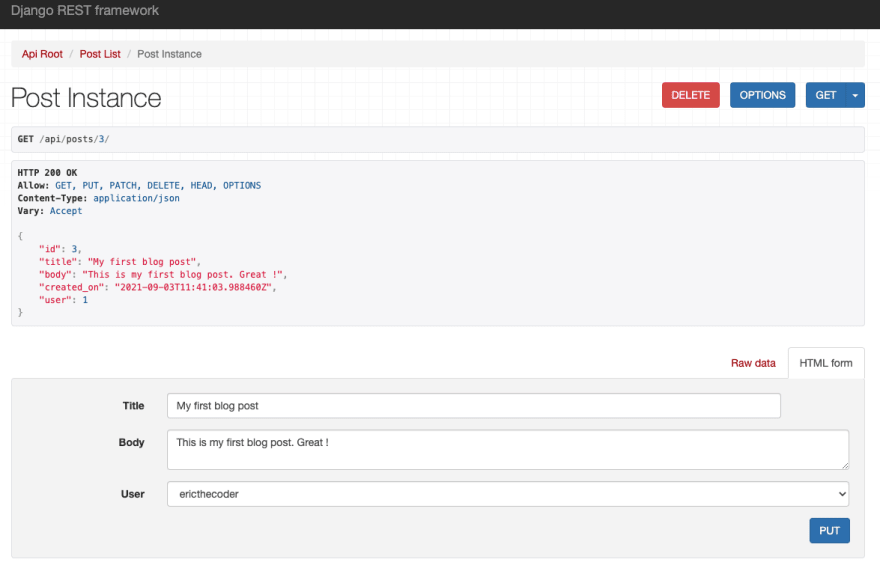 It is now possible to use this rest-framework interface to test the 6 actions and URLs paths that we created earlier.

Add search capabilities to our API

Django REST-Framework makes it very easy to add search capabilities to our API.

The result will be an endpoint available to filter our posts

In the posts application open views.py and add:

The last 2 lines of the class PostViewSet are pretty self-descriptive. The filter is set and then we specify all the fields to lookup.

This new search filter can be tested with the REST-Framework testing page.

Run the server and go to api/posts 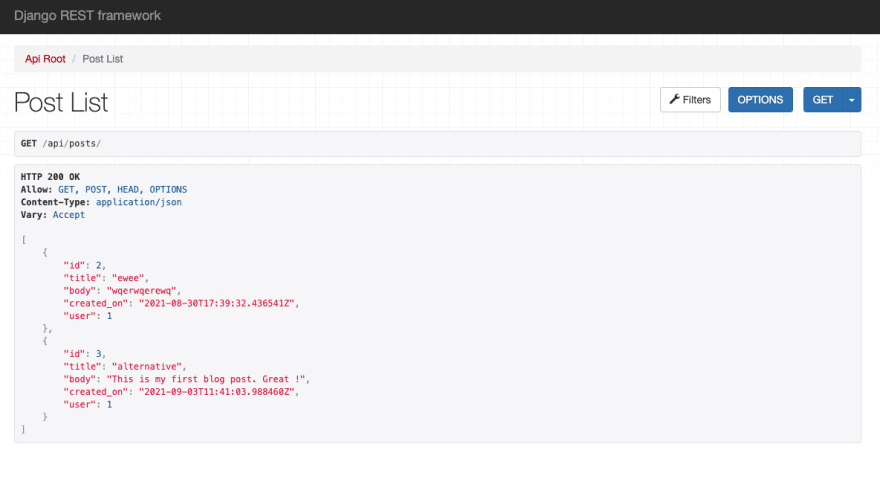 You should now see a Filter button (upper right). Click on the button and a search page will open 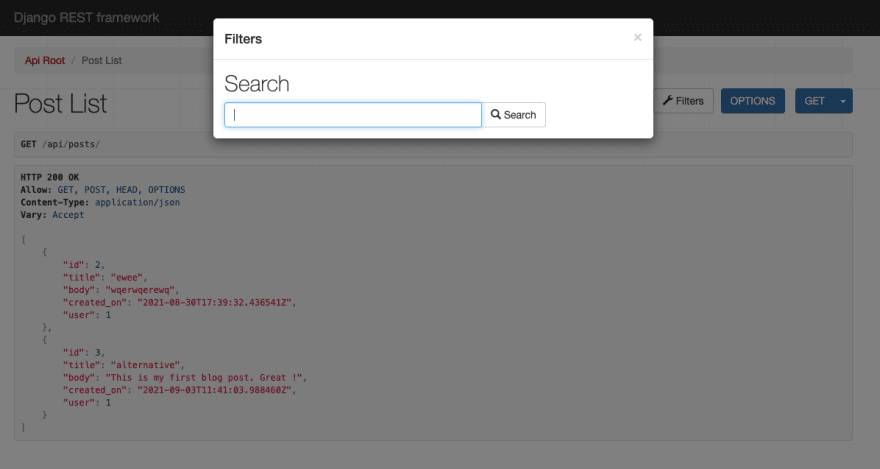 You can then enter your search text and click Search

The result of the search will be display

End of the first part

That's all for today. In the next part, we will discuss authentication with tokens and the protection of certain actions / URLs

Once suspended, ericchapman will not be able to comment or publish posts until their suspension is removed.

Once unsuspended, ericchapman will be able to comment and publish posts again.

Once unpublished, all posts by ericchapman will become hidden and only accessible to themselves.

If ericchapman is not suspended, they can still re-publish their posts from their dashboard.

Once unpublished, this post will become invisible to the public and only accessible to Eric The Coder.

Thanks for keeping DEV Community 👩‍💻👨‍💻 safe. Here is what you can do to flag ericchapman:

Unflagging ericchapman will restore default visibility to their posts.