I was recently working on migrating a project to GitLab, and had a branch with a some extraneous commits from trying to get CI setup correctly. While I was rebasing I noticed that I had a commit with two separate changes in it. After some digging I found out that I could also use interactive rebase split this commit into two distinct, atomic ones. I'll walk through how we can accomplish this goal.

First, let's perform an interactive rebase so that the commit we want to split is included in the range. In this case we can rebase the entire branch to where it diverged from master, so simply run git rebase -i master. Below we can see a snippet of the interactive rebase:

The commit we want to split has the hash bc38ac55, so let's change pick to edit.

We can save and exit the editor, now we've gotten the message "Stopped at bc38ac55". Good right? Not quite. What we really want to do is edit bc38ac55, so we need to run git reset HEAD~ to get to a state where the changes haven't been staged and committed yet. After running this command and doing a git status we can see that the changes are present but not staged: 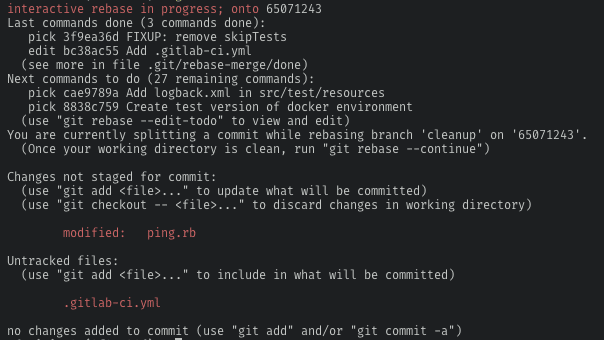 Now we can stage and commit as needed, creating 2 (or more commits). After we're done we can go ahead and run git rebase --continue to finish the rebase. Now when we run git log --oneline we can see our changes.

We can now see the two commits created from the process, and notice that the hash has also changed. Obviously this is something that is best done on a local branch or one that you've been working on solo and can safely force push over to the remote repo.

Hopefully this will be as helpful for you as it was for me!

A Personal .gitignore - Even for a Single Repository

Erik Nelson
Curious developer with lots of backend and devops experience. Kotlin is my favorite programming language.
What was your win this week?
#discuss #weeklyretro
15,000 GH stars in a year: how we did it 🤩
#opensource #career #devjournal #programming
git is not the end of history
#git #github #healthydebate #watercooler

Once suspended, erikthered will not be able to comment or publish posts until their suspension is removed.

Once unsuspended, erikthered will be able to comment and publish posts again.

Once unpublished, all posts by erikthered will become hidden and only accessible to themselves.

If erikthered is not suspended, they can still re-publish their posts from their dashboard.

Once unpublished, this post will become invisible to the public and only accessible to Erik Nelson.

Thanks for keeping DEV Community 👩‍💻👨‍💻 safe. Here is what you can do to flag erikthered:

Unflagging erikthered will restore default visibility to their posts.