Accessibility (a11y) is an essential part of web development because it provides unrestricted access to millions of users. Unfortunately, many developers fail to take the necessary steps to ensure web accessibility and often overlook it. A recent report revealed that 98% of the top websites do not offer fully accessible experiences.

If you're building a web app or website, you'd want it to be usable by everyone irrespective of their disabilities, age, and physical circumstances. Accessibility shouldn't be an afterthought carried out close to production; instead developers should include it from the start of the development process.

Luckily, accessibility isn’t so difficult to implement. Once you understand the issues that make a site nearly impossible to use by certain people, you can take the measures to prevent those issues and ensure your site is welcoming to all.

What is Web Accessibility?

Web accessibility is the method of making websites and web applications usable by everyone, including those with a form of disability, impairments, or limitations.

Nearly 15% of the world's population lives with some form of disability. Safe to say, if you don't develop your site to work with Assistive Technology (AT) like a screen reader, you prevent almost 1 billion people from engaging with your content.

When you build an accessible website, you're breaking down the walls of web exclusion and granting all users equal access to the web.

Building an accessible web is important for the following reasons:

1. Improves usability: Usability involves creating an effective, efficient, and satisfying product. When you make the web accessible, you automatically remove restrictions and make it available for everyone with or without a disability.

2. It is the law: Some government policies and laws mandate web accessibility compliance. Failure to comply with these laws could cause legal actions to be taken against your company, as in the case of Domino's Pizza. Hence, to prevent risks of lawsuits and complaints, it is best to ensure your website or app is accessible.

The two main guidelines that set web accessibility standards are:

The Web Accessibility Initiative (WAI), managed by the World Wide Web Consortium (W3C), published these guidelines. They are basic rules that explain how developers can create more accessible content for people with disabilities.

The WCAG is based on four principles, known as "POUR."

1. Perceivable: All information and user interface components must be
presented to users in a way they can perceive it.

2. Operable: User interface (UI) components and navigation must be operable.

3. Understandable: All information and the operation of the user interface must be understandable by users

4. Robust: Content must be robust enough to be interpreted by many users and assistive technologies.

To build accessible websites and web apps following the principles and guidelines above, let's examine some action items and best practices you can implement:

HTML comprises both semantic and non-semantic elements.
Semantic HTML is the foundation for good web accessibility practices because it specifies the type of content within the tags.

An example of a semantic HTML tag is the <button> tag because it conveys a button and a user should take action. What about the <div> tag? You probably guessed right! The <div> tag is a non-semantic HTML because it only acts as a wrap and doesn't communicate the meaning of its enclosed content.

When developing a product, strive to write semantic HTML because assistive technologies like screen readers use semantic HTML to understand how best to interpret each element to a user. 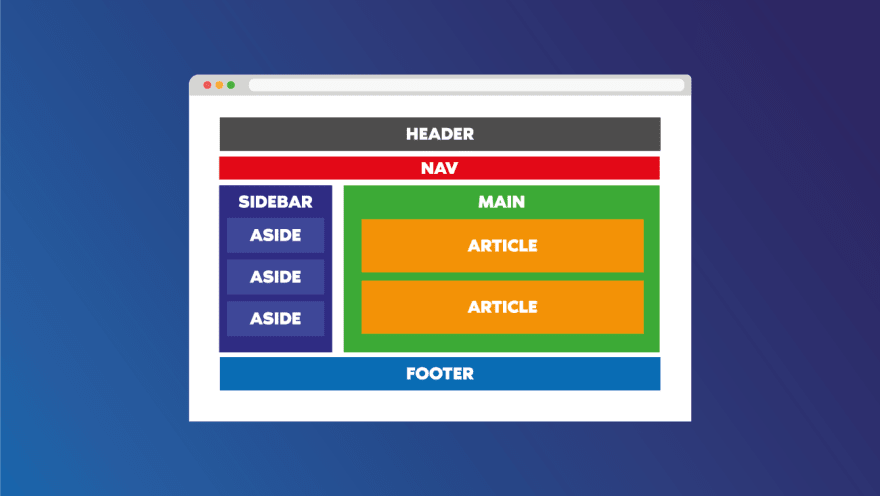 2. Use ALT texts for images

Images make content more appealing and easy to understand. For visually impaired web users who cannot see these images on the web, the ALT text helps them understand that image.

ALT provides descriptive text to images. These ALT texts allow screen readers to notify users of the kind of image. Without an ALT text, a screen reader would simply say <image> and not the image's description.

Here's an example ALT text for the image below: 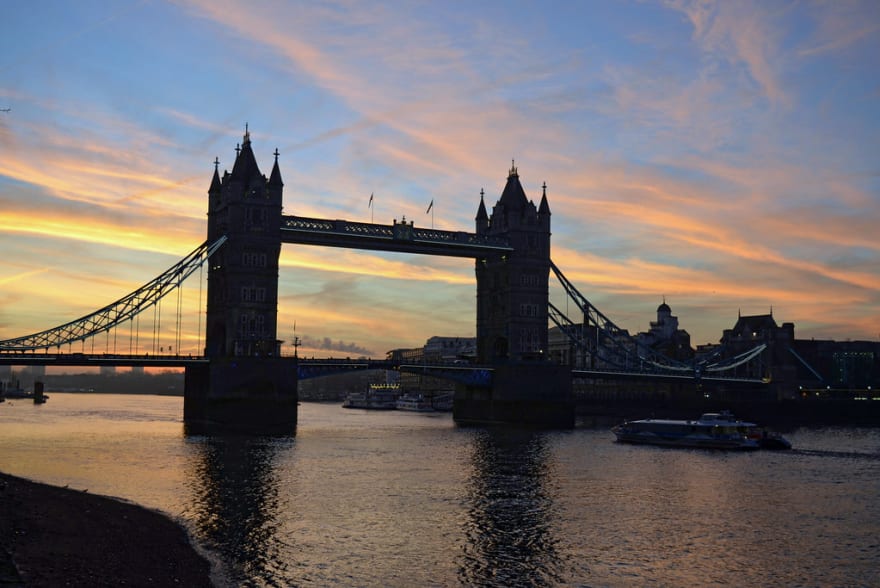 As a developer, the chances are that you can style a <div> to look exactly like a <button>. 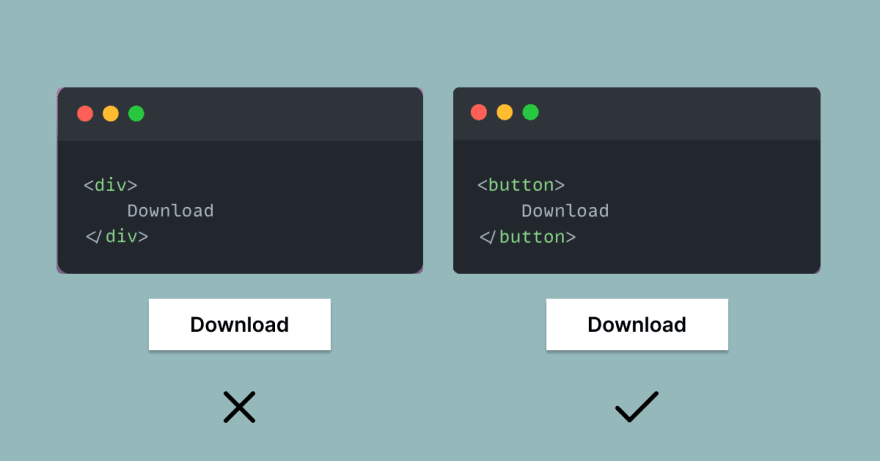 Visual representation of div styled as a button vs a button

To be fair, some people may argue that assigning 'role=button' makes the div a button. However, this approach is bad practice as you'd need to get many "bells and whistles" going, such as onClick handlers, preventDefault, and more.

By all means, avoid using <div>s to build <button>s and other interactive elements. Rather, use <div>s and <span>s as generic boxes for grouping elements at the block or inline levels.

Headings do more than give your text a fancy big, and bold look. They provide a solid structure to your web page. Think of them as guides that help readers quickly scan through the various sections of your webpage to get an idea of what each entails.

A good heading structure uses the <h1> to <h6> tags to organize web content for accessibility and a good user experience. 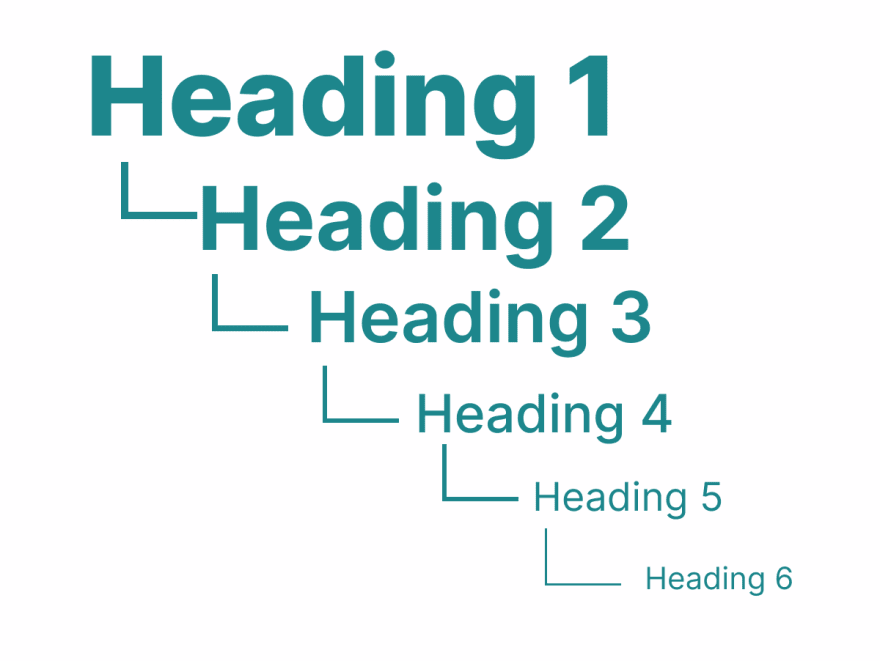 Without proper headings, visually impaired users won't be able to do a quick scan of the page sections and would have to read the entire web page for information. However, with a proper heading structure, screen readers can read a page's layout aloud, allowing users to quickly jump from one heading to another.

A golden rule is to avoid using headings to set font sizes or for visual styling. For instance, using a <h2> tag because you need a large font size. Doing this will result in a poor HTML structure and overall a bad user experience for assistive technology users. In short, use CSS for styling.

Not all users navigate a site page using a trackpad or mouse; many users (with or without motor disabilities) rely on the keyboard to navigate.

Developers need to be aware of the following to enforce keyboard accessibility:

To check the accessibility of your site:

Web Developers should ensure they validate their color contrast according to accessibility standards
before building web pages. With a good color contrast, you make it easy for every user to read text elements on your site easily. 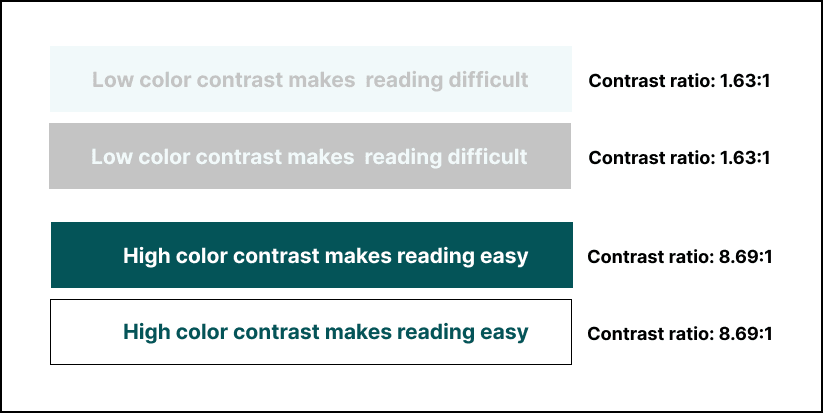 7. Underline links within a block of text

Link accessibility, although easily ignored is an essential aspect of accessibility. On many sites, links are only differentiated from text by color which makes it hard for users with color blindness to identify.

When it comes to making a link accessible, don't use only colors to communicate or differentiate links within a block of tex. By standard, WCAG2.1 recommends that links should also be underlined. 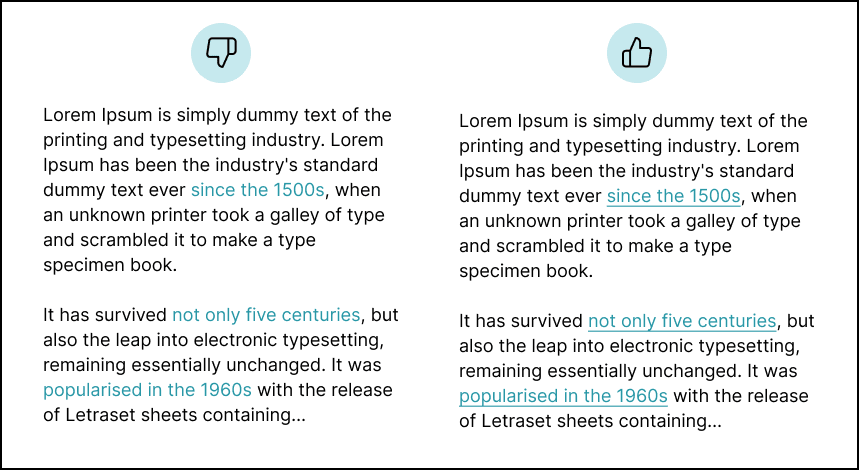 The previous versions of HTML lacked some tags that semantically described some UI widgets like menus. To bridge this gap, developers had to use <div> tags to create these widgets.

Although these widgets looked as they should visually, assistive technologies couldn't adequately interpret them to users because the code didn't provide enough information. This is because the <div> tag is a non-semantic HTML. ARIA was introduced to cover up accessibility issues HTML couldn't handle. ARIA, also known as WAI-ARIA, stands for Web Accessibility Initiative — Accessible Rich Internet Applications.

By definition, ARIA is a W3C specification that helps enhance accessibility for plain HTML by providing further information to assistive technologies using HTML attributes. It is important to note that ARIA solely provides an extra descriptive layer for screen readers and has no impact on how these elements are presented.

There are two major categories of ARIA attributes: Roles and State & properties:

3 popular ARIA States and properties are: aria-label, aria-labelledby and aria-describedby.

Note that ARIA doesn't replace HTML; instead, it complements it.

The same reason you would label a table for sighted users to get a quick idea of its content is why you'd need to add a caption to your table for visually impaired users. A caption describes the content of the table to screen readers.

To add caption to a table, use the <caption> tag and place it immediately after opening the <table> tag.

With the caption, a screen reader can now understand the information in a table and convey it to users.

Without a <label> tag, assistive technologies won't be able to understand and differentiate the input fields on your form. When a screen reader gets to a form, it immediately reads out the label so that non-sighted users know the type of input form.

There are two ways to attach <label> to <input> fields:

2.Place <input> within the <label> tags.

Build a web that's inclusive of everyone

While there are many aspects to consider when weaving accessibility into your site, the above information are a good foundation for building an accessible web.

Building an accessible web isn't a "nice to have" and should be a priority for everyone.