In this blog, I'll be covering how to create an initial Rails backend API utilizing Graphql. If you don't know Graphql, if you're familiar with it or just need a refresher, this blog is for you.

Let's generate a new API-only application. I won't be using most of the gems that come with a new rails generation, so the command I will use with numerous options is:

Unfortunately, the graphiql-rails hasn't been updated since January of 2019. There are many pull requests and issues stated, and quite a few direct you to how the application can begin working again. I will show you how you can do so further down.

In config/initializers/cors.rb, uncomment the following code:

For Rails, you'll need to add this middleware on application startup. A practical way to do this is with an initializer file. For example, the following will allow GET, POST, PATCH, or PUT requests from any origin on any resource:

We use insert_before to make sure Rack::Cors runs at the beginning of the stack to make sure it isn't interfered with by other middleware (see Rack::Cache note in Common Gotchas section). Basic setup examples for Rails 5 & Rails 6 can be found in the examples/ directory.

Rails 6 has support for blocking requests from unknown hosts, so origin domains will need to be added there as well.

A more detailed reason for this addition can be found here in the Ruby on Rails Guide.

Graphql will be interacting with ActiveRecord. We will have to create our migrations and models as we normally would. I am using the bcrypt gem, so instead of a password field, it will be a password_digest field.

The graphiql-rails gem enables one route in your application where you can open a browser and develop using an IDE for graphql.

After navigating through the issues, I stumbled onto the best solution I could use without changing much of the code I currently have. It can be found here in this issue.

You would navigate to "/graphiql" in your browser, and the path would still use the graphql#execute action.

Sprockets is a Ruby library for compiling and serving web assets.

To create the last fix, run touch app/assets/config/manifest.js to create a manifest.js file. Put this inside of it:

That's all. This is so the gem can link to the CSS and js it defined in its own files. Now we can begin building the types.

Now that we have a user and a record, we can generate the graphql install. Run:

To keep it simple I won't go into detail about the mutations directory.

GraphQL cannot execute a query without a type system.

Every GraphQL service defines a set of types which completely describe the set of possible data you can query on that service. Then, when queries come in, they are validated and executed against that schema.

Before building a schema, you have to define an entry point to your system, which is called the “query root”. The query root will be the query_type.rb file.

Including the root query in the schema ensures that the application is now functional. Run rails s. Your application should be working normally, and you can run queries on the types above without a problem. 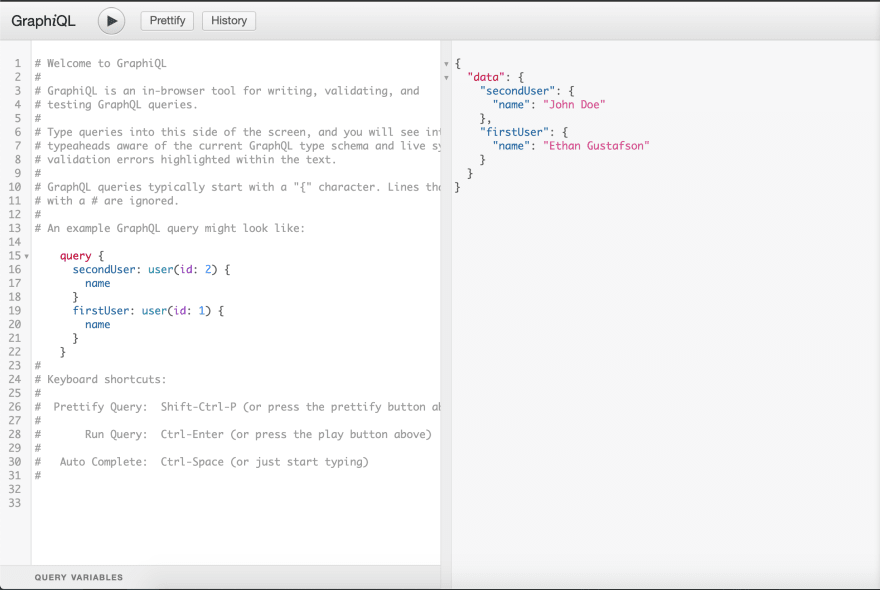 How to use Prisma with express, postgress, and Graphql?

Once suspended, ethanmgustafson will not be able to comment or publish posts until their suspension is removed.

Once unsuspended, ethanmgustafson will be able to comment and publish posts again.

Once unpublished, all posts by ethanmgustafson will become hidden and only accessible to themselves.

If ethanmgustafson is not suspended, they can still re-publish their posts from their dashboard.

Once unpublished, this post will become invisible to the public and only accessible to Ethan Gustafson.

Thanks for keeping DEV Community 👩‍💻👨‍💻 safe. Here is what you can do to flag ethanmgustafson:

Unflagging ethanmgustafson will restore default visibility to their posts.