Being on the job hunt for my first web developer role I realized that knowledge and experience with serverless architecture are required and critical for most positions.

During my Full-Stack Web Development training program, I already built an authorization server with the Serverless Toolkit and AWS Lambda. But, only practice makes perfect, and I wanted to have another project to cement what I've learned.

As I'm currently re-reading the Harry Potter book series, I had the idea to build a Sorting Service that assigns a user to a random Hogwarts house. Besides, it should show other students already living in this house. To fetch data about characters, I used this Harry Potter API.

With Node, Serverless Toolkit, AWS Lambda, and API Gateway we'll build a simple API that returns a random Hogwarts house as well as some housemates.

Before we can start with the actual project, we need to have Node and npm installed, as well as create and activate our own AWS account.

One reason we'll use the Serverless Toolkit here is, that we'll have to install axios, later on, to fetch data from the Potter API and Serverless lets us easily do this. I also like Serverless when working with AWS because it's easier to implement code or deploy functions locally without having to work with the inline code editor in AWS.

To install Serverless globally and create a Node template, we run the following commands:

To achieve this, we have to follow these steps:

Back in our terminal, we run the following command (using our own credentials):

Configuring and Setting Up serverless.yml

We now open the serverless.yml file in our code editor and declare our sections as follows:

We open the handler.js file, delete the dummy code, and replace it with the following: 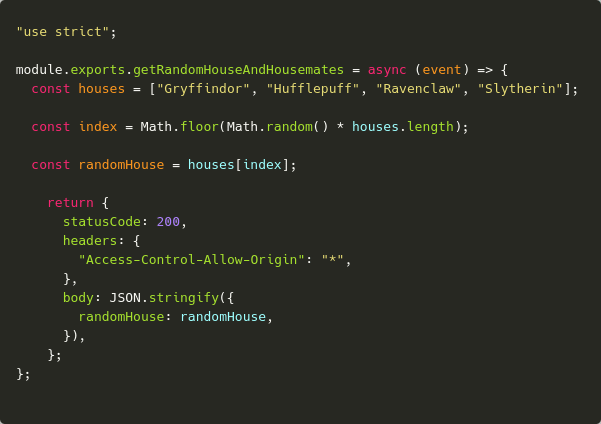 Let's take a closer look at the code example above:

The function is named getRandomHouseAndHousemates because in Step 2 we'll also fetch data of associated house members.

First, we put all four Hogwarts houses inside an array. Then, we create a random index that is used to display a random house. We use the Math.random() function that returns a floating-point, pseudo-random number between 0 (inclusive) and 1 (exclusive). We also need the Math.floor() function to get a whole number and not a floating type. Because Math.floor() returns a number representing the largest integer less than or equal to the specified number, if passing Math.random() as a parameter to Math.floor(), we get a whole number.

But there is one problem left we have to handle: Math.floor() is always rounding down to the nearest decimal, so every decimal between 0 and less than 1 (and that is what Math.random() is returning) will always be 0. To get a random number between 0 and 4 (the length of our houses array) we have to multiply the Math.random() by randomHouse.length. This index now can be applied to get a random house.

Because we'll have cross-origin requests if we'd want to use our service within another app, we also have to add the Access-Control-Allow-Origin header to the return statement in handler.js

Before deploying, we can test our function locally. For now, it should only return a random Hogwarts house. From inside our project directory, we run:

If everything works as expected, we should see something like this in our terminal:

If that works, we can go on and implement the additional logic to fetch and return data about our new housemates.

Getting data from 3rd party API

In order to be able to make requests to the Harry Potter API, inside our random-sorting-service folder, we run:

In our handler.js, we add the code we need to get and return our housemates' data: 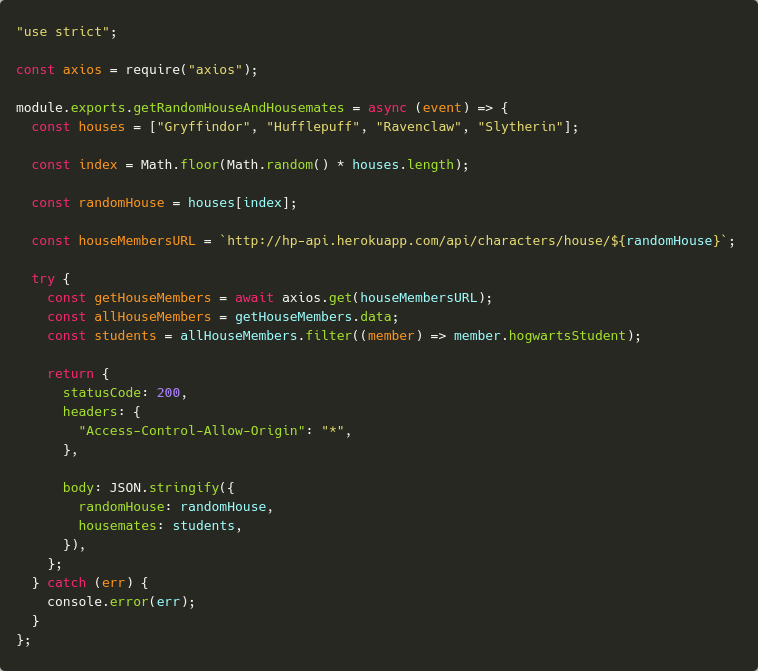 Let's take a closer look at this code example, too:

In our handler.js, we have to require axios. Then, we use the randomHouse variable declared in the first step to generate the URL to reach the API endpoint we need. Subsequently, we make the API request. As getRandomHouseAndHousemates already is an async function, we'll use a try...catch block to handle possible request errors with axios.

Because we plan to return only students from the same house, but the given endpoint returns teachers as well as students, we have to apply the filter() method to the API response as well.

Now it is time to test our function locally again before we finally can deploy:

We should see something similar to that in our terminal:

If that works, we can deploy:

The Serverless Toolkit will now hand over our function to AWS using the infrastructure requirements we provided in our serverless.yml. When successfully finished, we should see this information in our terminal: 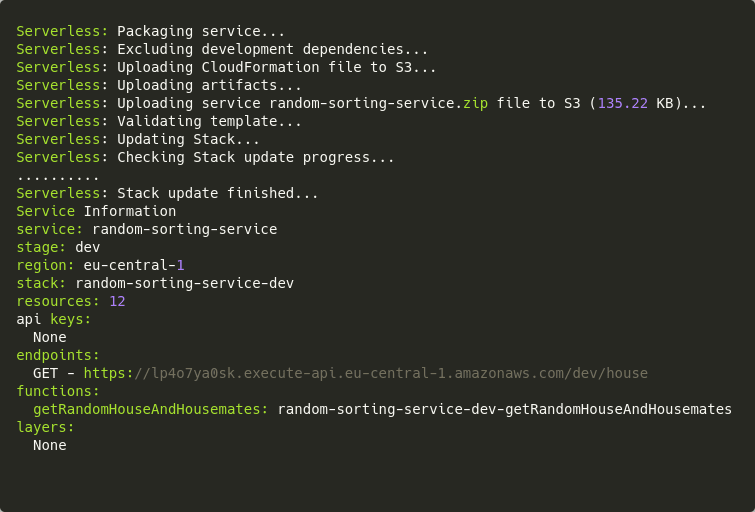 Under the endpoints output, we can see the (API Gateway-) generated URL we need to invoke our function. The path /dev/house not only contains the trailing /house as specified in our serverless.yml but also contains /dev/ as Serverless deploys to the dev environment by default (we could also deploy to production by using the --stage flag: serverless deploy --stage prod).

Now, we can check if all files have been deployed to Lambda successfully. In our AWS Management Console, we search for Lambda and select getRandomHouseAndHousemates. We should see something like this: 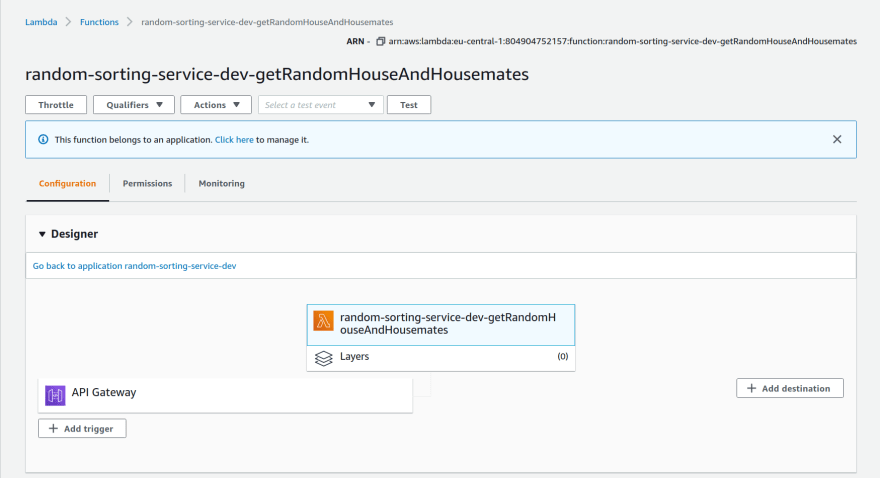 We can try out our endpoint by simply copying it from the terminal and paste it into the address bar of our browser.

If we use Postman, we get a neater looking result: 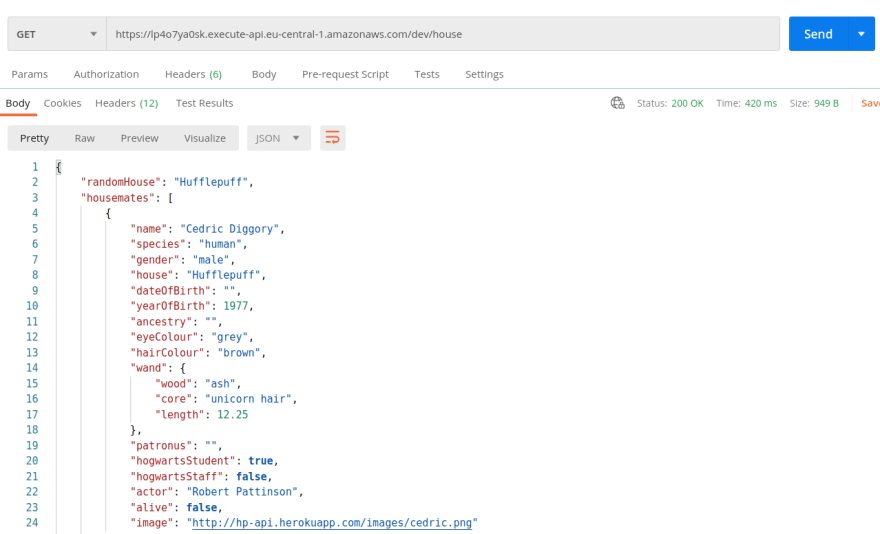 Now that our serverless function is up and running, we could access our newly created API from any web application (I'm planning to build a Sorting Hat App with React and TypeScript, but this is another story...).

Find the completed code of this Random Sorting Service on GitHub.

The Most Underrated Tools Every Developer Must Know: Part 1

How can you access AWS S3 objects with lower latency.

Once suspended, evagrean will not be able to comment or publish posts until their suspension is removed.

Once unsuspended, evagrean will be able to comment and publish posts again.

Once unpublished, all posts by evagrean will become hidden and only accessible to themselves.

If evagrean is not suspended, they can still re-publish their posts from their dashboard.