Docker implements a software concept called a container. Essentially, the idea is when you ship code from development to production, you ship your code inside a container.

In the early days of the web, it was common for developers to have a set of very delicate steps for deploying. These steps might include, in some logical order:

This entire model of deployments has many potential problems.

Can Docker perfectly solve all of these problems?

Can it solve most of them, and make the rest routine?

Let's go over some of the benefits of using Docker. Each container can:

It is important to emphasize, because Docker containers, by default, do not have a permanent file system, this means when your container is shut down, any files created or modified will be reset on the next container deployment. Be sure you are aware of this when you create your Docker container. If your application needs to store data, it should be done on some external system, or it must attach something called a Docker volume.

The value of reproducible environments

Reproducibility is a fundamental tenet of science. In computer science, and its implementation via software engineering, reproducibility can be found in unit and integration tests. Docker brings reproducibility into deployments and devops. There are many benefits to this new paradigm:

All reproducibility is possible because of container images.

What is a Container Image?

If you are familiar with the concepts behind virtual machines (VM), you may have heard of a VM image. It is a template for creating new virtual machines. There are some similarities, but also important differences.

Container images are up of layers. Each layer represents a Docker instruction. All except the last layer is read-only. This allows Docker to reduce the size of images by sharing common layers between running containers. The diagram below shows how you might deploy several instances of an image as different containers. Because each layer is read-only, these layers can be shared amongst several containers without the risk of data corruption. Only the last layer is writable, and this layer is usually kept as thin as possible. 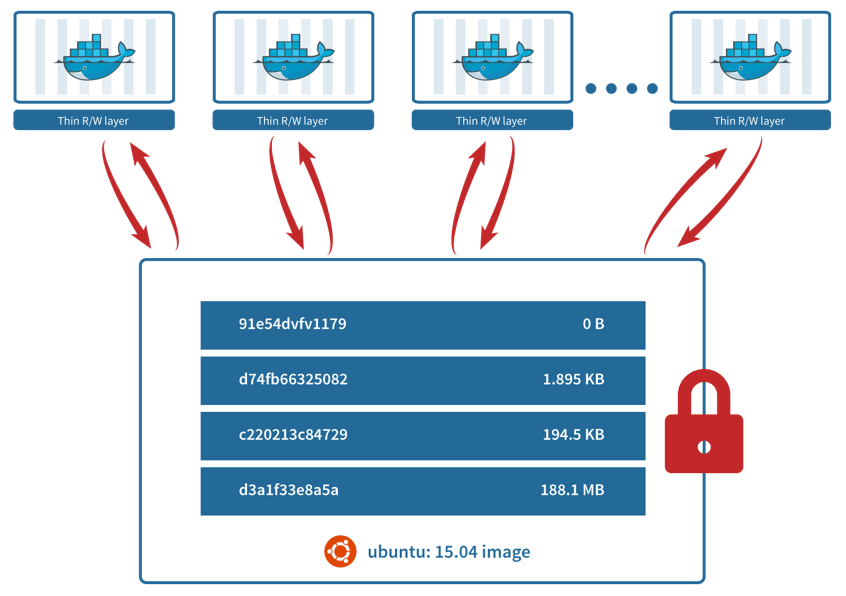 In the next section, we're going to Dockerize a simple Node.js app.

Let's make an app.js to Dockerize

For this tutorial, we will be using Node.js, since Express is the most popular Node.js framework. For a future project, perhaps we can use Meteor, which is also popular.

To create an Express app, all you need is a single JavaScript file. The official documentation shows a simple "Hello, World" tutorial.

To run this simple web server, we need to give it a folder. Create one somewhere. For this tutorial, I'm creating the directory the-greatest-node-js-app-ever. In that folder, we're going to install Express:

NOTE: If you are on a Mac, you might see this alert. You can click "Allow" in this case.

Now switch to your web browser and go to http://localhost:3000. You should see something similar to this:

If we want our app to be self-contained and deployable, we should probably keep track of what dependencies we're using. In Node.js, that is handled by a file called package.json.

The version number of the express package might have changed since the time of this writing. Make sure to include the latest version instead of ^4.17.1.

After creating package.json we should install of the necessary packages via npm install. This step is important because it will generate package-lock.json, which locks the version numbers for all of our package dependencies. Locking the version number prevents unintended upgrades or downgrades.

Once we have our package-lock.json file, we can create the Dockerfile.

We're going to use the following content for our Dockerfile.

In a future tutorial, we will go over the details of these lines. For now, we'll continue with the process of building a Docker container.

Docker containers are based on Docker images. You can think of an image like an installation package. It contains all the necessary data to run the container. During the deployment process, a Docker image will be sent to the host machine. The host will then use that image to create the container.

To build the image, make sure you're in the project's directory and run docker build ..

This can take a little while, but you should see a lot of activity from that one single command. At the end of the process, there will be a line saying Successfully built c132a227961b (although yours will have a different image ID than mine).

By the way, don't forget the . at the end, which is necessary. It tells Docker to build the image based on the Dockerfile in the current directory.

The list of images is sorted by newest first, so you should see your image listed here with the image ID (in my case c132a227961b). However, under the REPOSITORY and TAG, it only shows <none>. It's not critical that those be filled in with values. Your container can run just fine without them. But, trying to remember the image ID is an error prone process. Thankfully Docker gives us the ability to name and tag our images.

Giving Your Image a Name

It is much easier if we give our images human readable names. Let's rebuild the image, but this time with the --tag flag.

Running docker images again gives us a container with a name:

Turning an Image into a Container

Now that we have an image, we can tell Docker to run it, which will create our container.

To verify that everything works correctly, go to your web browser and double check http://localhost:3000 looks like this:

Now that our container is running, let's discuss how to manage it.

Similar to how we manage processes on a machine using a command line ps -aux (where ps is short for processes), we have a similar command for Docker, which is docker ps. This is what mine looks like, while writing this tutorial:

Like most processes, this Docker container is running in the background. To gracefully shutdown or stop this container, we can run docker stop <CONTAINER-ID>. In our case, the container ID is db032070bda8.

Also like most processes, containers sometimes can become unresponsive when trying a graceful shutdown and need to be forced to shutdown. For ordinary processes, we would use a kill -9 command. For Docker, the command is docker kill <CONTAINER-ID>.

Interacting with Your Container

A Docker container is meant to act as an isolated environment, almost like a separate host machine. This means you can "login" and run a Bash shell inside your container. Once you're inside the container, you can look around and verify your application is working properly. The command for this is docker exec -it <CONTAINER-ID> /bin/bash. The flag -i stands for interactive and the flag -t is used to create TTY session, much like an SSH session.

Removing Your Stopped Container and Image

Note that even when you stop a container, it is still being managed by Docker. Since containers rely on images, you must remove the stopped container first, then you may remove the image. If you do not run those two steps in order, you'll get an error message like this:

If you run the commands in the correct order, it should look something like this:

In this post, we've covered the basics of Docker, what containers and images are, and how they are useful in the world of software development. We discussed what Docker images are and how they produce Docker containers. Additionally, we explained the value of containers and images, and showed how to dockerize a very simple Node.js application. In future posts, I hope to discuss the Dockerfile in more detail, as well as Docker volumes and Docker networking.

Senior software engineer, who is currently delving into the world of data science/machine learning.

Can't use that CLI you just installed through NPM? Fix your $PATH

Serverless on AWS Lambda: A Comprehensive Comparison Of Approaches (Serverless Framework vs SAM vs Terraform vs CloudFormation)

gyp: No Xcode or CLT version detected! 👈 I think I know why this happens