In the table below you can see a few common C++ data type names and the total number of bits that make up them.

In this section we examine memory bits and bytes a little more closely to gain a deeper understanding of them. We also discuss general game mathematics that can be found in computer graphics and geometry and primitives in 2D and 3D.

Base-10 mathematics is trivial. Binary mathematics follows the same rules with the exception that instead of using base-10 we are using base-2. That means each position can be one of two values instead of one of 10 values as seen with base-10. In the first position in base-2 a value is either 0 or 1. The second position represents how many objects are in the “twos” position, the third position represents how many “fours” objects there are, and so forth

Let's take a look at the following example to understand this better.

If one needs to store a certain range of values, the necessary number of bits must be available. Going past a range a set of bits can store leads to overflowing.

Bytes are the second-smallest memory unit we commonly use in computer programming. The ASCII characters we use can be represented in a byte, also known as a char in programming languages such as C, C++, and C#. String objects are made up of an array of bytes, with one byte for each character (which can be a letter, symbol, number, etc.) in the string. 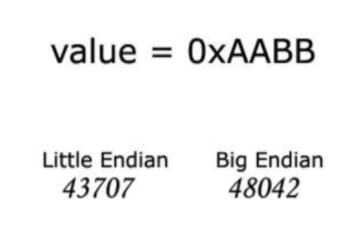 Little- and big-endian orders are the most common byte orders. There is also a middle-endian order.

In computer hardware the byte-ordering is very important when storing and transmitting data between two or more machines that operate using different byte-ordering. For example, Intel Pentium processors use little-endian order, and PowerPC processors (common in Mac computers) use big-endian order. To have hardware systems that use different byte-ordering be able to communicate with one another, the data must have their bytes swapped so that the destination machine is able to interpret correctly any data it receives.

This solution is simple and can be done by casting a variable to a character pointer and performing the swapping in a loop, but programmers who are unaware of byte-ordering can encounter what appear to be mysterious critical errors when trying to share and transmit data between different platforms. No action needs to be taken regarding endianness when working with machines that use the same byte-ordering, but be aware of it otherwise.

The math to determine this is as follows:

Hexadecimal values can come in a triplet known as the hex triplet. This is commonly used in different technologies such as HTML and cascading style sheets as a means to specify color values. In a three-component 24-bit color specified in HTML there are two values for each component. For example, pure white is #FFFFFF, where # is a symbol used to mark the start of a hexadecimal value; the first FF is the red component (with a value of 255 or 240 [15 * 16] for the first F plus 15 for the second F), the second FF is the green component, and the third FF is the blue component.

As another example, the color #68A3F8 can be translated as

Many tools allow colors to be chosen and displayed in hexadecimal form. Adobe Photoshop is one of these tools that allow a color to be specified by choosing it from a color picker, specifying the value of each component’s byte, or by specifying a hexadecimal triplet. 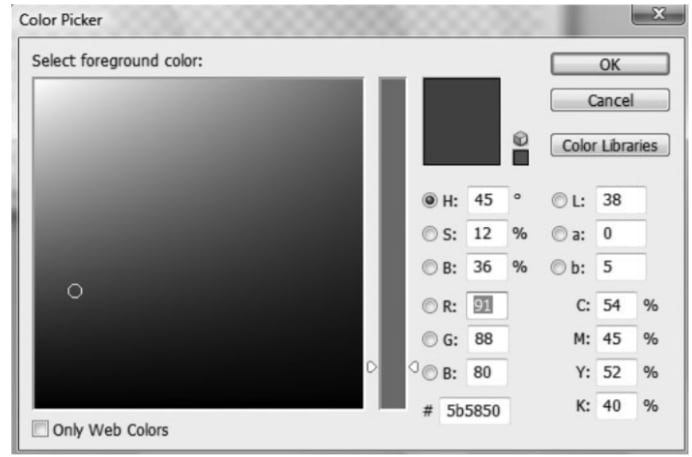 The human eye can see a lot of detail in a wide range of luminous values. When people look at something artificial like computer graphics it is at times very easy for the human eye to pick out things that are not true to nature. The closer we can get to creating scenes that are believable to the human eye, the more realistic our scenes will look to us and those around us.

In computer graphics, the representation of color values and how they are translated to the computer monitor (or TV screen) is very important to being able to create the types of imagery you are looking to create, especially if realism is the goal. As color information moves throughout the rendering pipeline, it is operated on to build the final color. The information that makes up this data can become lost due to inadequate precision in the color’s memory. Colors in computer graphics are generally in a low dynamic range of values or a high dynamic range.

Low-dynamic-range, or LDR rendering, is what is commonly referred to as rendering in the traditional manner or, in other words, basically not using a high dynamic range of values during the rendering pipeline. Commonly, although not necessarily, we use a maximum of 8 bits per component for the color values in a rendered scene. The range of colors that can be displayed is very limited—hence the “low” in LDR. When rendering in LDR, the detail, precision, and quality of the colors of the rendered scene can be lost throughout the rendering pipeline. When this happens, the final results often have various artifacts visible to the screen.

Also, saturated colors can dominate the rendered scene if colors that are brighter than the display attempt to be drawn.

Using a maximum of 8 bits per component is not necessarily a bad thing. Also, for lighting, a higher range of values is very beneficial to not only decrease rendering artifacts but also to retain as much quality throughout the pipeline as possible. This can be seen in many of today’s modern games and is becoming quite common in the industry.

When working with 8-bit color components, or less, there is a low limited range of values that can be used for a color that can have a negative impact on the final rendered scene. As we already know, 8 bits can store 256 values. For lighting, colors, and what the human eye can see this is not a lot of detail, even for a color that is made up of four 8-bit components (32-bit RGBA). Also, the limited, and in this case fixed, range of values does not allow for high dynamic contrast. If colors are too bright, they are saturated, and eventually the detail can’t be seen. In reality the human eye can see detail in a very large range of luminance colors, and we can adapt to different levels of brightness.

Modern video games, and other graphical products, make use of high dynamic-range rendering, also known as HDR rendering. The idea behind HDR rendering is to use more bits per color component so that not only a higher precision of values can be stored, but also a higher range. Using HDR for rendering allows us to retain quality and to decrease rendering artifacts such as banding. Once rendered, this HDR data has various algorithms applied to it to map those high ranges of values to a range that can be rendered to modern TV screens and monitors. This adjustment, which happens after adding various special effects such as blooms, streaks, and so on, is known as exposure adjustment and is something the human eye does naturally when moving from a dark environment to a light one and vice versa (e.g., getting up in the middle of the night and turning on the light after spending hours in the dark).
Exposure adjustment is also known as tone mapping.

The purpose of HDR rendering is to preserve lighting and color detail throughout the rendering pipeline and to display that information to the screen. Before displaying the results to the screen, a process commonly referred to as tone mapping is performed to transform that HDR information into a range that can be displayed on a monitor. This tone mapping process attempts to mimic the human eye’s ability to adjust to the information it is viewing by adapting to the visual information. This can be seen in many games, such as Ubisoft’s Splinter Cell Double Agent for the Xbox.

Using a higher precision for colors can allow you to retain more data during renderings.

HDR is definitely important to research when learning and trying to implement computer graphics because the final results of a rendered scene can be affected by the quality and detail of the image that is generated. In games, graphics are very important, and this quality, as well as the ability to add various and natural special effects, can help improve the look of the overall rendered scene. HDR has become standard in modern 3D video games.

Once suspended, fkkarakurt will not be able to comment or publish posts until their suspension is removed.

Once unsuspended, fkkarakurt will be able to comment and publish posts again.

Once unpublished, all posts by fkkarakurt will become hidden and only accessible to themselves.

If fkkarakurt is not suspended, they can still re-publish their posts from their dashboard.

Once unpublished, this post will become invisible to the public and only accessible to Fatih Küçükkarakurt.

Thanks for keeping DEV Community 👩‍💻👨‍💻 safe. Here is what you can do to flag fkkarakurt:

Unflagging fkkarakurt will restore default visibility to their posts.