In this entry I want to share you, how to solve the water jug riddle using Javascript, by the way a curious fact, this problem is featured in the film Die Hard. So, the riddle is:

You have 2 jugs, 5 and 3 liters of capacity respectively, without any measurement mark, in addition you have an unlimited water source that allows you to fill the jugs with water. Exactly 4 liters of water is required in one of the jugs.

Note: The same problem is explained in this entry and is implemented in Prolog (Spoiler: is in spanish).

First of all, we should answer the following question, How would we solve this manually?

In order to measure the 4 liters required, a set of steps must be executed, we suppose that, the initial state is 0 liters of water in the large and small jug.

2. Once the 5-liter jug ​​is full, pour the content of the large jug into the small one, resulting in 2 and 3 liters of water; now the small jug is full. 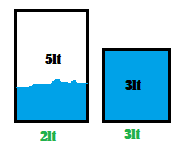 Finally, in this step the problem has been solved in 6 steps, it should be mentioned that this is not the unique solution, since there are more, for example, you can start by filling the small jug (3lt).

To represent each state of the jugs, I'm going to use an object, it has two properties, small and large, of type integer.

In the following code, 4 functions are written to modify the jugs states.

The first 2 lines are constants to define the maximum capacity of jugs.

To find the path to the solution, Breadth-First Search (BFS) is proposed, because is the most efficient algorithm to find the shortest path, this algorithm begins from the root and goes through each node by levels instead of branches as Deep-First Search (DFS) does, using a queue to temporarily store nodes.

BFS is implemented to find the shortest path.

When executing the previous code, the following is printed in console.

It's my second blog, written entirely in English (I'm not a native speaker), maybe you've already realized, so sorry for the misspellings!, please If you have any recommendation, or comment you can leave in the comments section.

Stay safe and thanks for reading!