With more than 670,000 subscribers to their newsletter and more than 4 million fans on Facebook, Aleteia reaches over 13 million unique visitors and draws 40 million page views per month, making it the most popular Catholic website in the world.

In May 2020, Andrea Romano, Chief Technology Officer at Aleteia, contacted us to let us know that his team was discussing the opportunity to migrate all their websites to Frontity. Both the digital publishing industry and user behavior have evolved quickly during the last years. They wanted a performant, flexible, and modern stack to improve their web experience and meet today's users expectations.

Although it’s been only a few months since they finished the migration to Frontity, we wanted to talk with Andrea to know how it went and how Frontity has helped them so far.

After Google’s algorithm core changes as well as Facebook’s strategy to give less organic post visibility on the news feed, Aleteia’s global traffic wasn’t growing as expected at the beginning of 2020. Andrea and his team identified some areas of improvement, and one the biggest one was related to web performance and SEO.

"Site speed is a ranking factor, and it’s especially critical for mobile pages. Slow websites have a lower number of conversions, a lower number of page views per visit, and higher bounce rates. Essentially, a slow site means people will bail because no one has the patience to wait for a website to load."

We met Andrea in late 2018, when he approached us to learn more about our previous product (Frontity PRO) and how it could positively impact on Aleteia's performance and UX. Since then, the idea of building a React theme has been hanging over his head.

The traffic drop made the need for a modern web app a priority. Google just announced new metrics to evaluate how users perceive the experience of interacting with a web page, and they were also worried that their website could be penalized in the future. It was time to update the tech stack to correspond to the team needs.

While their previous stack was stable, it lacked flexibility. In order to improve the overall web experience, Andrea aimed to move Aleteia to a modern frontend which they could have more control over while maintaining the WordPress backend. They also needed something that would integrate well with all the services used by Aleteia.

Lastly, they wanted a technology partner who could support them during the process. We have been in contact with Andrea for some time now. He already knew the benefits that Frontity brings for digital publishers, as well as our dedication to help them succeed.

When the time came to make a decision on the frontend stack, Frontity and our team just gave them the confidence they needed.

Andrea's first approach for upgrading Aleteia's website was to develop a whole new custom theme in React using Frontity. However, as any greenfield project of this magnitude, they quickly realised that this was going to require a longer timeframe.

In order to address some of the above concerns quickly, the development team finally decided to put their efforts into migrating their current WordPress theme to Frontity first. This would help simplify the process.

As soon as we knew about their decision, we connected Andrea with Eduardo Campaña, who formerly worked at Frontity. They hired him as a freelancer to work on the project along with their two in-house engineers, who were new to Frontity.

According to Andrea, Eduardo's help and guidance was fundamental in their transition to Frontity. He enabled the team to quickly get up and running with the framework and its development practices.

In just a couple of months, they managed to complete the migration of all their websites. That is seven websites in total (one per language), including the implementation of several packages to integrate their analytics and ads partners, as well as their GDPR and web push notifications services.

Frontity's extensibility and its package management interface made this integration more efficient and allowed the team to continue using their preferred services. 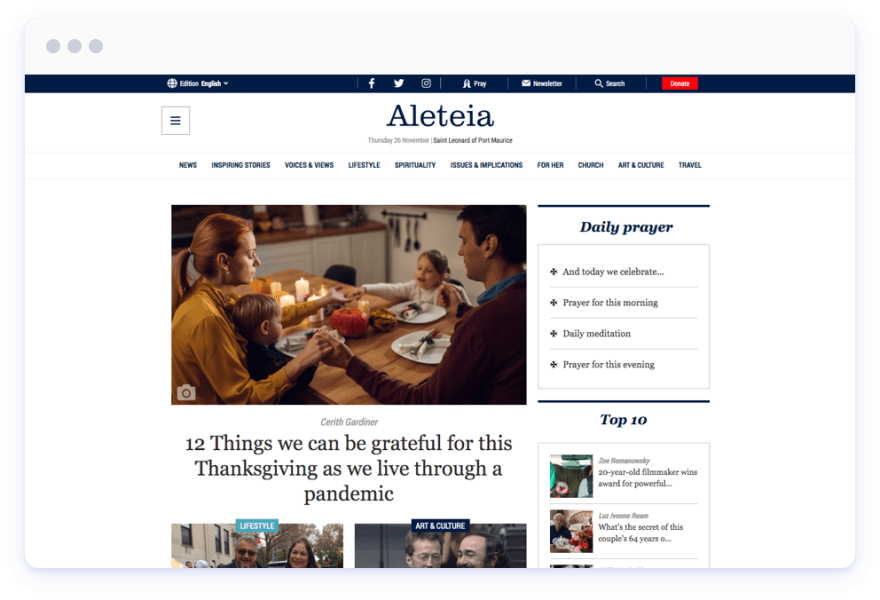 Right now, Andrea and his team are working on adding premium content for paid subscriptions to the website. They will keep adding progressive enhancements and features during the next months.

Among the reasons for choosing Frontity, Andrea's particular emphasis was on the support from our team. "We didn't choose Frontity only for technological reasons. One of the key factors which convinced us to use it was the team behind it, because they gave us a sense of real support" he said. Andrea also recognised that the fact of being invested by Automattic was a plus that reaffirmed his confidence in the project.

"I truly believe in the people. If the team is well prepared, I trust in what they are building. And the people who work at Frontity is what makes it unique."

Frontity brings a lot of advantages that go beyond performance, SEO, and scalability. A great developer experience when it comes to creating a more complex UI among the top ones.

Going for WordPress and Frontity in the stack ensured that Aleteia doesn't spend time re-inventing the wheel and that they get the best possible results in the short term.

Frontity helped the migration run smoothly, which allowed Aleteia's team to minimize the development time and accomplish their main goals in a very short period of time.

While they still have bigger plans with the framework, switching to a modern frontend stack was already a great first step in evolving their website.

"Everything went smoothly and Frontity integrated well with our existing services. In just a couple of months, we were able to publish all the websites. I'd recommend Frontity because it significantly helps reduce the development time. The product is solid and stable."

They are armed with a performant website that is easier to maintain, allows them to handle iterations easily, and gives them room to implement new features and ideas.

"One of the best things about Frontity is that it's very flexible. Even a complex website like Aleteia, with seven editions and different packages between them, is quite easy to tweak."

In addition, because Frontity is rendered dynamically, it makes it a great fit for medium and large scale publishers like Aleteia with a lot of content that might change rapidly, giving them a great power and reliability when it comes to frequent and real-time updates.

Lastly, moving to Frontity meant no interruption to Aleteia’s publishing workflow. This is especially important for teams that produce many pieces of content every day, as even the smallest impact on their workflow can pay dearly.

With the new decoupled approach, only the development team at Aleteia works directly with Frontity, leaving the content editors to continue working in WordPress as if nothing had changed.

We’re very happy and proud to see how Aleteia has successfully migrated to Frontity in such a short time. Special thanks to Andrea and his team for taking the time to share their story with us.

This project has allowed even a closer collaboration between both teams, and we look forward to growing together.

Have an enterprise project you want to discuss? Frontity brings many benefits to both development and editorial teams by helping to solve many of the challenges with headless WordPress. We'd love to talk with you about how we and our partners can help you.

What does Create React App Include?

How to create a React Component Library with Storybook + PostCSS

Frontity is the first React framework built for WordPress. It connects both seamlessly so that you can focus on building your website instead of all the tooling and configuration. Open source and free to use.