PWAs are on the rise. Arguably Progressive Web Applications is the future of Web Development & Design. The PWA apps load like a regular web page but provide the feature to work offline, push notification, and device hardware access. Follow along and check the top 22 Progressive Web Applications interview questions and answers every full stack developer would be asked in 2020-2021.

Q1: What is a progressive web app?

The concept of the progressive web app (PWA) was approached by Google in late 2015. They are basically web applications (Website) but have look and feel like other native mobile apps. The progressive web app enabled websites can offer functionalities such as working offline, push notifications, and device hardware access.

Q2: What are some benefits of PWA?

Benefits of the progressive web app:

There are some key principles a web app should try to observe to be identified as a PWA. It should be:

Q4: Why do we need a web manifest for PWA?

A web manifest file lists all the information about the website in a JSON format. Having this file is one of the requirements to make the website installable.

It usually resides in the root folder of a web app. It contains useful information, such as the app’s title, paths to different-sized icons that can be used to represent the app on a mobile OS (for example, as the home screen icon), and a background color to use in loading or splash screens. This information is needed for the browser to present the web app properly when installing, and on the home screen.

Q5: What are some disadvantages of PWA?

Disadvantages of the progressive web app:

Q6: What features do Progressive Web Apps have that native apps lacks?

Q7: What is a service worker?

A service worker is a specific type of JS Script, which runs in the background of the user’s browser. It acts like a proxy server exists between your app, the browser and the network. Among other things, service workers allow apps to continue functioning offline in case the user loses internet connection.

Service Workers are a virtual proxy between the browser and the network. They finally fix issues that front-end developers have struggled with for years — most notably how to properly cache the assets of a website and make them available when the user’s device is offline.

They run on a separate thread from the main JavaScript code of our page, and don't have any access to the DOM structure. This introduces a different approach from traditional web programming — the API is non-blocking, and can send and receive communication between different contexts. You are able to give a Service Worker something to work on, and receive the result whenever it is ready using a Promise-based approach.

They can do a lot more than "just" offering offline capabilities, including handling notifications, performing heavy calculations on a separate thread, etc. Service workers are quite powerful as they can take control over network requests, modify them, serve custom responses retrieved from the cache, or synthesize responses completely.

Q8: What is the differences between a Hybrid Mobile App and a Progressive Web App?

A hybrid mobile app usually refers to an application built using a combination of web and native technology that is distributed via a native app store. These apps go through Apple, Google, Microsoft, etc's app store review process.

A Progressive Web App is an application built using web technology that runs in the browser and may be added to the home screen. They do not need to be distributed via native app stores, but can be included in them. Microsoft includes PWAs in its Microsoft Store as of 2018 and Trusted Web Activities make it easier to submit PWAs to the Google Play Store.

Some hybrid mobile app platforms include PhoneGap (aka Cordova), Appcelerator Titanium, and Ionic. You don't need a platform to create a hybrid app, but they are helpful because they've already taken care of creating a bridge between native APIs and JavaScript APIs.

Progressive Web Apps simply run in the browser so they can be built with basic HTML, CSS and JavaScript.

A fetch event fires every time any resource controlled by a service worker is fetched, which includes the documents inside the specified scope, and any resources referenced in those documents (for example if index.html makes a cross origin request to embed an image, that still goes through its service worker.)

Q10: What are some requirements to make the website installable as PWA?

To make the website installable, it needs the following things in place:

Q11: What is IndexedDB and how is it used by PWA?

IndexedDB is a large-scale, NoSQL storage system. It lets you store just about anything in the user's browser. In addition to the usual search, get, and put actions, IndexedDB also supports transactions.

In a context of PWA a general recommendation for storing data offline:

CacheStorage is a storage mechanism in browsers for storing and retrieving network requests and response. It stores a pair of Request and Response objects. The Request as the key and Response as the value.

CacheStorage is not a Service Worker API, but it enables SW to cache network responses so that they can provide offline capabilities when the user is disconnected from the network.

The caches (an instance of CacheStorage) object is used to access the CacheStorage, to retrieve, store and delete objects.

A service worker has a lifecycle that is completely separate from your web page.

When installed, the activation step will follow and this is a great opportunity for handling any management of old caches. 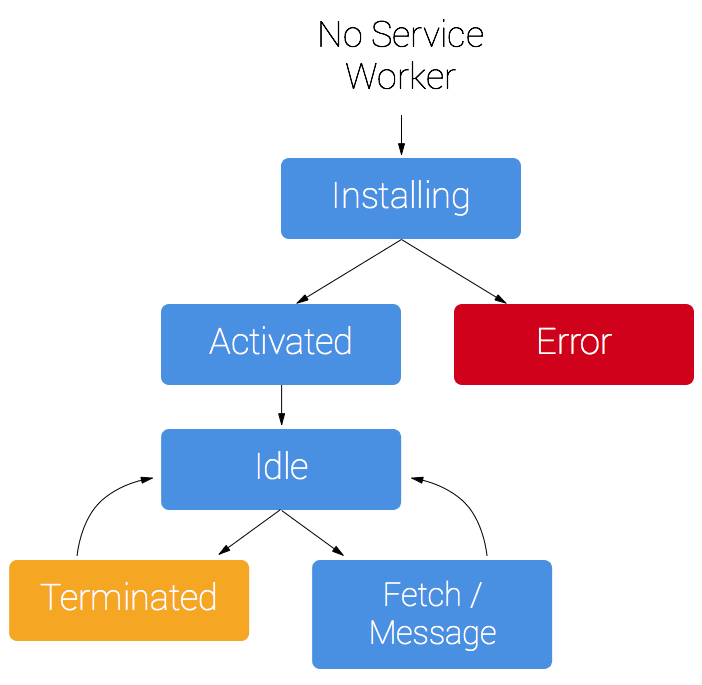 Q14: How to update a service worker?

There will be a point in time where your service worker will need updating. When that time comes, you'll need to follow these steps:

Q15: What are some service worker's caching strategies do you know?

An application shell (or app shell) architecture is one way to build a Progressive Web App that reliably and instantly loads on your users' screens, similar to what you see in native applications.

The app "shell" is the minimal HTML, CSS and JavaScript required to power the user interface and when cached offline can ensure instant, reliably good performance to users on repeat visits. This means the application shell is not loaded from the network every time the user visits. Only the necessary content is needed from the network.

An application shell architecture makes the most sense for apps and sites with relatively unchanging navigation but changing content.

Q17: What are some requirements to app shell?

The app shell should ideally:

Q19: Is it possible to have multiple service workers?

Q20: What can service workers do that web workers cannot?

Web Workers are handy to run expensive scripts without causing the user interface to freeze, while Service Workers are useful to modify the response from network requests (for example, when building an offline app).

Q21: What are some benefits of an app shell architecture with a service worker?

The benefits of an app shell architecture with a service worker include:

Q22: Is it possible to have truly persistent storage in a PWA and why may you want one?

The answer is No. The user can delete the PWA (if installed on Android) and clear their browser's cache of everything from your PWA.

The Cache API is temporary by design, and the IndexedDB data can be wiped when the user clears their browser cache.

So to persist app's data across PWA installations you should use cloud storage via some API.

What kind of Developer do I want to be?