In the previous post we looked at some ways to debug transactions that were mined in a testnet or in the mainnet, using etherscan and eth-cli. In this post we'll move to transactions that we execute in "local" blockchains, like ganache-cli and the Buidler EVM.

I'm going to use the Truffle MetaCoin box for the examples, so if you want to follow along you can start by running npx truffle unbox metacoin in an empty directory. You'll also have to edit the truffle-config.js file, uncomment it, and change the port of the development network from 7545 to 8545.

If your project is built using Truffle, you can use its debugger to inspect a transaction step by step. This is a command line tool similar to gdb or pdb; if you've used something like that in the past, the experience is very similar.

In our example, if we start ganache-cli in another terminal and then run npx truffle test, we'll see a bunch of transactions being executed. Copy the hash of the last transaction and run:

(Your hash could be different.) 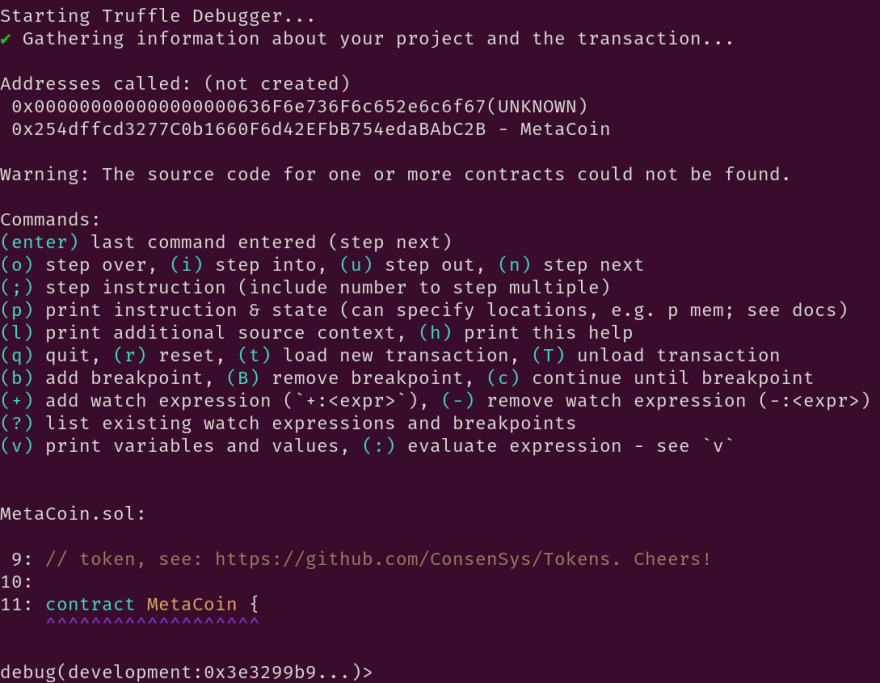 Here you can do things like seting a breakpoint with b, stepping over to the next line with o or evaluating an expression with :. Let's step over twice and inspect the value of the amount parameter with :amount: 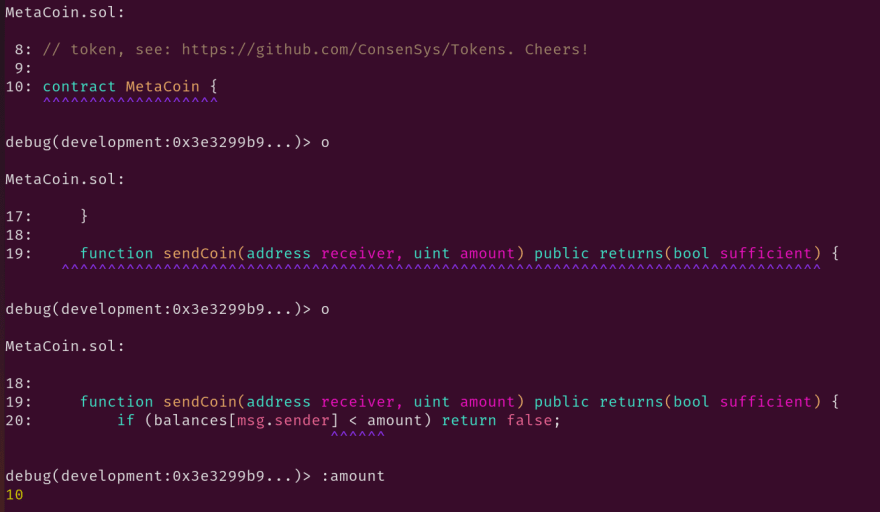 Check the docs to learn more about this feature.

Another tool you can use is the global debug() function in your tests. Go to test/metacoin.js and replace this line

and then run your tests with npx truffle test --debug (notice the extra flag). Your tests will be interrupted when that method is called and you'll be able to inspect it: 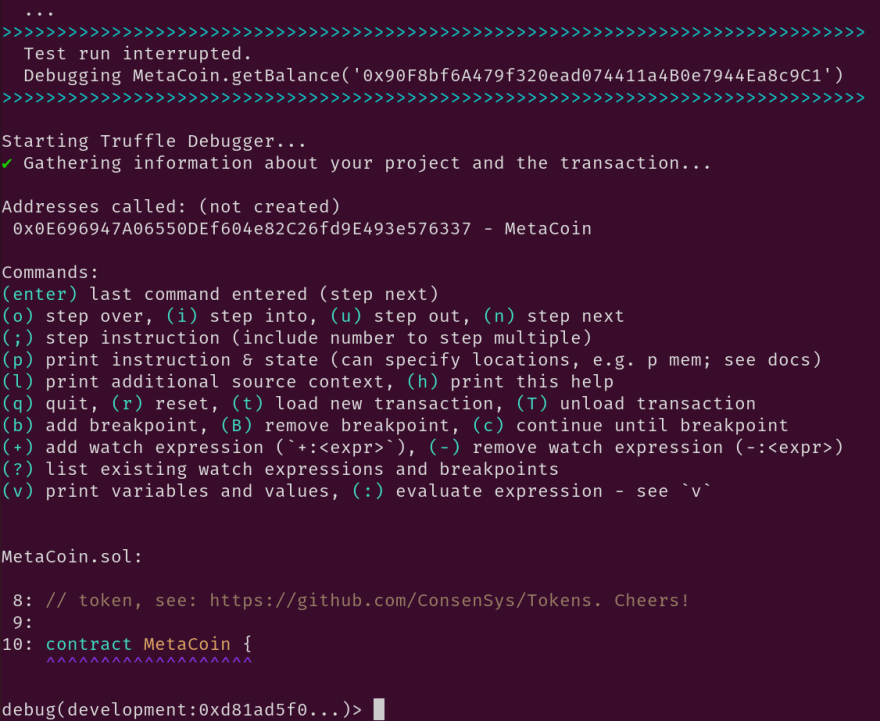 This is great not only because you don't need to get the hash of some transaction, but also because you can use it for plain calls that don't even send a transaction.

What about transactions in a testnet or in the mainnet? As far as I know, truffle debug can be used against any node that supports the debug_traceTransaction JSON-RPC method. And (again, AFAIK; here I am in the "I don't really know what I'm talking about" territory) besides local blockchains, this method is supported mainly by geth when syncing in archive mode. I haven't tested it because this requires syncing more than 2 TB of data.

Are there any other alternatives? Not that I'm aware of. Infura doesn't support debug_traceTransaction calls. I also tried using ganache --fork but this didn't work either (it actually kind of worked once? I think it might if the transaction is recent enough).

Anyway, if anyone knows how to do this, please let me know in the comments.

Buidler is a task runner for smart contract projects that comes with a lot of useful tools. You can use it on its own, or you can complement a truffle project with it, which is what we're going to do here. First, install it:

and then run npx buidler and select the "Create an empty buidler.config.js" option.

One of the things that come with Buidler is the Buidler EVM, that lets you do things like logging stuff inside your contracts or having stack traces that work across solidity and javascript. Let's start with the console.

First, open the contracts/MetaCoin.sol file and add these two lines:

Next, kill ganache-cli (if it's still running) and execute npx buidler node, which starts a node that uses the Buidler EVM.

You'll notice that here we are logging the same information that is emitted in the Transfer event, so what's the point? Well, first of all, events are not emitted for failed transactions, but the console works just fine. And second, you can also use logs for method calls that don't send transactions.

The Buidler EVM also supports stack traces that look like this:

Getting this to work is a little more involved, but worth it. First, install the truffle and web3 buidler plugins:

Then open buidler.config.js and add

to the beginning of the file.

Then create a file called test/truffle-fixture.js:

This is just some glue code we need so that our contracts are deployed before running our tests with buidler (so far we've been running them with truffle).

You'll also need to remove the solidity test that comes with the MetaCoin box:

This is necessary because buidler doesn't support Solidity tests yet.

Now everything is ready: run npx buidler test to run your tests in the Buidler EVM. Of course, tests still pass so we won't get a stack trace. Let's modify our contract to trigger an error. Open contracts/MetaCoin.sol and add this line:

and run npx buidler test again. You'll get a stack trace like the one we saw at the beginning.

Both Truffle and Buidler offer some nice functionalities to help make sense of what's happening inside your contracts. The MetaCoin contract is really simple, so this might seem overkill, but you've surely run into issues where you wished you'd had a debugger, a logger or a stack trace. Or, even better, all three of them!