A few days ago I stumbled across a performance issue in our app. It is written in C# and compiled against .NET 4.7.2. After doing some investigation I wanted to take a deeper look into the implicit array bounds checks of .NET.

If you want to read more about my process of analyzing that stuff, stay tuned! I will write more about it in a few days!

So I tried to reproduce that behavior in a very small console app but did not succeed. The key here was the optimizations that were done by the JIT compiler.

What will happen? An IndexOutOfRange exception will be thrown. This is possible because .NET ensures that the index is lower then the size of the array. Of course that check costs time so I wanted to know if I would be able to omit those checks.

I put a breakpoint at line 2, switched to the Release profile and started debugging.

Note: The reasons for that and how you can get the ASM code is something I will show in a subsequent blog post.

I expected the runtime to stop at position 2 but what really happened: 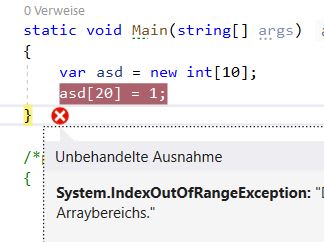 My breakpoint was skipped and I first I did not know why this happens.

Well, this is possible. VS will warn you but you can continue debugging, though.

The breakpoint is hit event though I am in a release build. 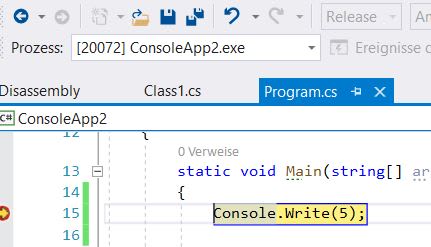 First I thought this has something to do with the array bounds violation so I tried this one:

I placed a breakpoint at line 5 and was sure that this time my breakpoint must be hit. But no. I started the program and it closes immediately. Very disappointing. 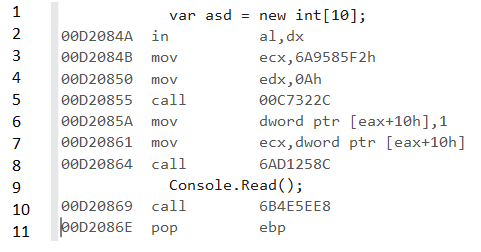 What is happening here:

Maybe you noticed the abstinence of our local variable asd? Also if you are not familiar with ASM code, you should realize that no local variables are involved here. And that is exactly the reason why the breakpoint was never hit. The JIT compiler understood that the local variable was not really necessary, omitted it and held the reference to the array in the register EAX all the time. Visual Studio now was not able anymore to map the executed code back to our source code and thus no breakpoint was hit.

The same in debug mode

When you start your code in debug mode, you expect that the code does exactly what you have written. Visual Studio knows this and does no optimizations in the debug mode. This leads to local variables that are not necessary and so on. 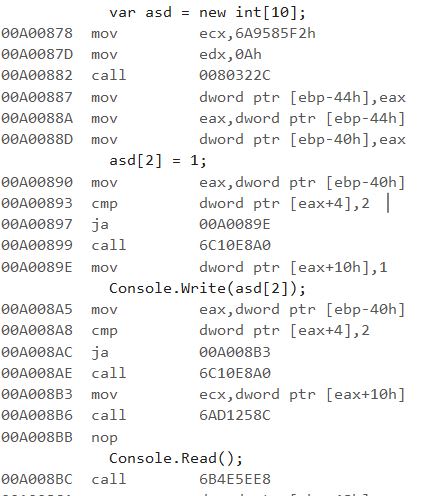 Optimizations are done at two levels. At IL Code level (C# -> .exe) and at machine code level (.exe -> RAM). We have taken a look at the latter here because I wanted to introduce you into that topic to make it easier to understand my following blog post that takes a deeper look.

Of course, the local variable asd was already removed during IL Code generation. Let's look at the IL code of that example in both, release and debug build: 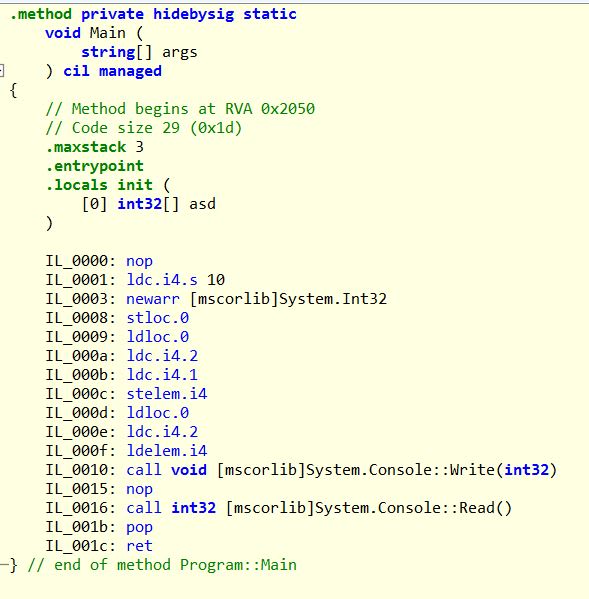 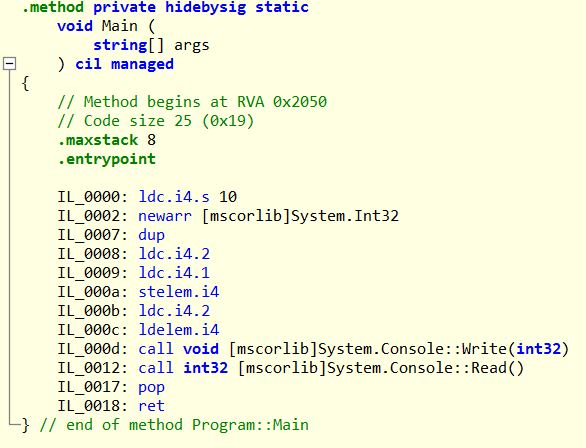 As you can see, the local variable is missing already.

This simple example shows that the JIT compiler is clever enough to detect and avoid unnecessary code. But it also will make performance measurements more difficult. Just think about what would have happened if you have a more complex example with more local variables in a loop or something else. You get completely wrong results if you were taking performance measures in debug mode!