I just wanted to share how a recent feature launch for my dev tool (divjoy.com) ended up making $10,041 in 4 days. That's more than its earned in the previous 4 months! What's more, this happened in entirely on Twitter. I'll be talking about some things I learned, pricing insights, as well as tactics for launching on Twitter and keeping the hype going for multiple days. Okay, let's do this ⛷

Divjoy is tool that allows you to generate a custom Node + React codebase with everything you need for your next project like authentication, database, subscription payments, marketing pages, forms, account settings, etc. Everything works out of the box.

Unlike most templates or boilerplates, Divjoy allows you to customize your technical options and template in a low-code editor before downloading your codebase. That means you get exactly what you need, nothing you don't, and you can get right to working on your actual product (you know, the fun part!).

The feature I launched was Stripe payments integration. This was a big step for the product because it meant that customers would now be able to export a complete SaaS app. Just export your code, add some environment variables, and you've got a functioning web app with pricing page, Stripe payments flow, customer billing management, webhooks, and everything else you need.

I knew there was a good number of people waiting on this feature, but I really wanted to do everything I could to ensure the launch was a success. Frankly, being a solo-founder is tough and I knew that I needed more than a small uptick in sales from this to keep my enthusiasm and productivity going strong.

After some lively debate between me and my dog (what can I say, this whole pandemic thing is getting to me), I decided to combine the launch with an awesome lifetime deal. For $49 you'd get access to Divjoy for life. That's less then the normal yearly price! Maybe I went a bit overboard on the discount, but I decided it was better to hedge my bets on a successful launch even if it meant leaving money on the table.

In terms of where and how to launch, that honestly didn't require too much planning. My entire audience is on Twitter and I know Twitter well. My plan was to post an announcement tweet in the morning and periodically update the thread throughout the day with product details and launch stats (more on this tactic later).

The last thing I did was add an announcement to the homepage: 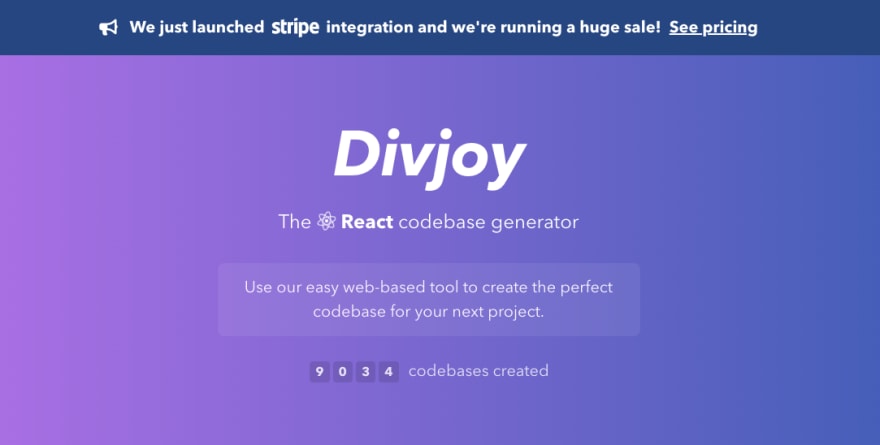 And update the pricing section to show the deal: 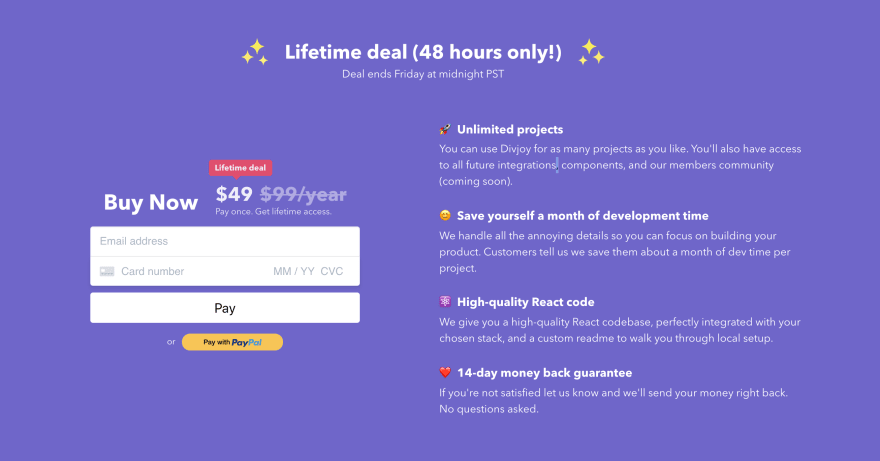 The launch started with a single tweet on Thursday, July 2nd. Here's a screenshot + some tips for a successful feature launch tweet: 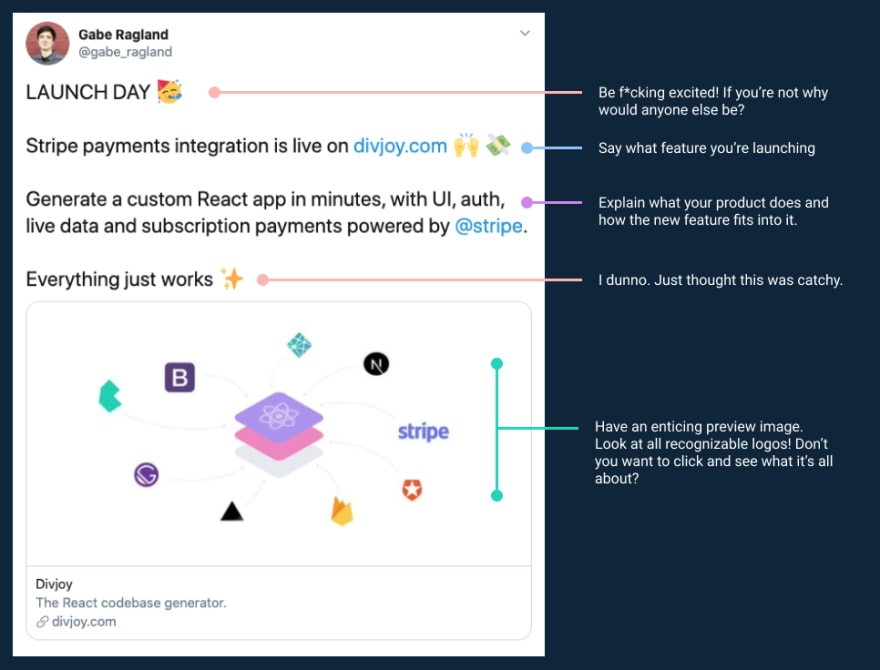 Likes and retweets started rolling in pretty quickly. Basically, my Twitter followers are awesome people and have made every single one of my launches successful. I really wouldn't be anywhere without their support ❤️

The major difference this time was that sales were coming in quickly as well. In past feature launches I might see a couple hundred people hit the website and 5 extra sales that day, but this time I passed 5 sales within the first 20 minutes. And I hadn't even mentioned the deal yet...

A little while later I added a new tweet to the thread, announcing the lifetime deal and some perks. 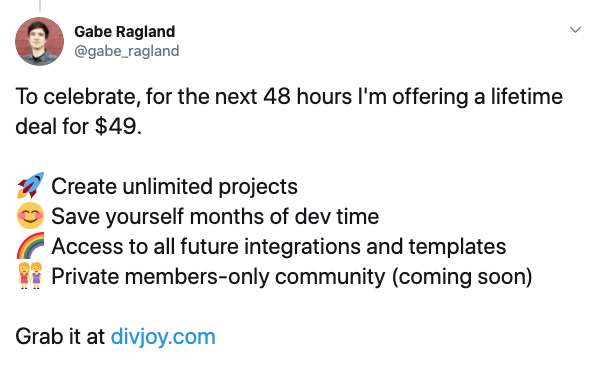 And sales started coming in even faster and continued at a steady pace over the next 48 hours. I continued to update the thread over the course of the launch, but ending up spending the vast majority of that time answering support questions and giving new customers advice on how to extend their code. It was exhausting and hard to keep up.. but also really validating to see so many people hacking away on product ideas right after purchasing. That's the whole point! A lower barrier to entry means more people building that idea they've always wanted to build.

By the time the deal ended Friday evening it had done $7,448, but I ended up extending through the weekend after waking up to a bunch of messages from people asking if it was too late.

I really really did not expect things to go so well and was honestly kind of baffled the whole time. After finally getting some good sleep Sunday night and reflecting on what happened I came up with a few thoughts:

😬 What could have been better

All in all I'm ecstatic about how the launch went. I was hoping to break $1,000 in sales and ended up doing 10x that. What more can I ask for?

Since the launch I've spent most of my time talking to new customers and learning about what they're building. Over the next month I'm going to be focused on expanding the selection of templates/components, working on an improved onboarding flow, and finally getting my SEO game together.

I hope you found this writeup interesting and that it helps inform your next launch. Feel free to drop any questions you have in the comments below.

Once suspended, gabe_ragland will not be able to comment or publish posts until their suspension is removed.

Once unsuspended, gabe_ragland will be able to comment and publish posts again.

Once unpublished, all posts by gabe_ragland will become hidden and only accessible to themselves.

If gabe_ragland is not suspended, they can still re-publish their posts from their dashboard.

Once unpublished, this post will become invisible to the public and only accessible to Gabe Ragland.

Thanks for keeping DEV Community 👩‍💻👨‍💻 safe. Here is what you can do to flag gabe_ragland:

Unflagging gabe_ragland will restore default visibility to their posts.