In August 2018 I bought some Pi’s tp create a cluster, mainly after reading and watching Alex Ellis and Scott Hanselman’s blogs and videos on the subject, which inspired me to make the purchase. I was running Code Clubs at the time, so I thought this would make a good show and tell as well.<!--more-->

Both Alex and Scott posts were both inspiring and I really wanted to give it ago. Anyway I got the equipment, but work and real-life got in the way and progress was slow. Then in December 2018 I landed a new job, starting in April this year, and they use Kubernetes extensively so I also had another good reason to get it up and running - to learn Kubernetes!

So this month I finally got it working, including a proper master and node setup: 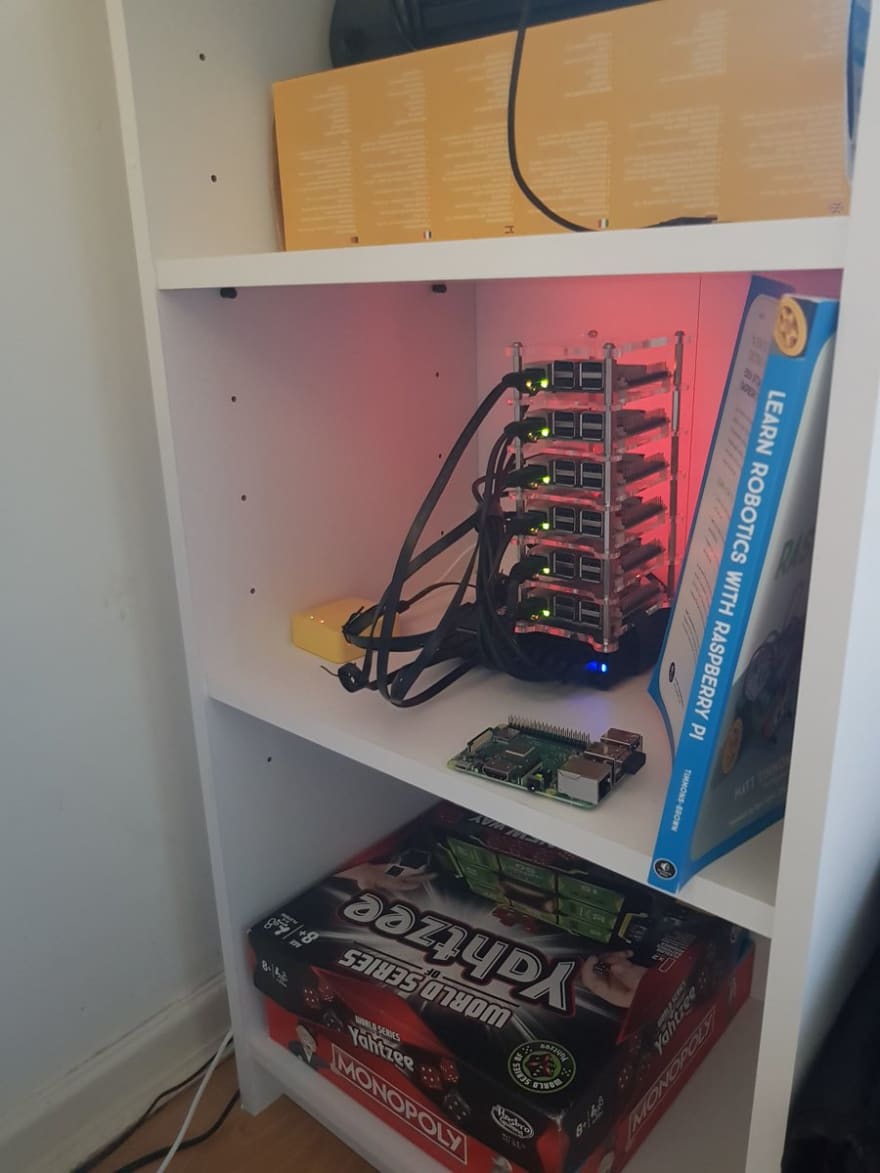 There were some pain points, like make sure you set up your static IP’s for your Pi’s (and set them up correctly on your router), and more importantly, set up a static IP for the router itself. The yellow box is the picture is the rGL-MT300N-V2 router I went for in the end, and the only bit of Hanselmans shopping list from his post, I diverted from.

My Sons love it

My two sons love it, as we are building Raspberry Pi robots as well in parallel to this. They are interested in what this is doing and why. Sparking curiosity in little minds is important, and me just building websites doesn’t get their juices flowing!

Should I do this?

Well, learning Kubernetes itself and running some .NET Core container sites. I would like to see how quick the .NET SDK is for building on the Pi’s now, as I would like to experiment with an local build server.

Also, Alex is the creator of OpenFaaS, a cloud agnostic Serverless solution. Having worked with Azure Functions recently at my current job, I can definitely see why this is a good idea. A Serverless infrastructure without being tied down to a specific cloud. I want to explore converting a small Web API app to OpenFaaS and experimenting there (I’m actually super excited).

Lastly, when I restart my Code Clubs up, I would like to do a show and tell with something interesting that includes the cluster. I was thinking about running some OpenFaaS functions that “talk” to my Pi robot I’m building and possibly allow you to control it for example.

Lots to do before April arrives!

Segmentation Errors in Kubernetes and How to Fix Them

What would you do if your encrypted credentials and the key got compromised?

Once suspended, garfbradaz will not be able to comment or publish posts until their suspension is removed.

Once unsuspended, garfbradaz will be able to comment and publish posts again.

Once unpublished, all posts by garfbradaz will become hidden and only accessible to themselves.

If garfbradaz is not suspended, they can still re-publish their posts from their dashboard.

Once unpublished, this post will become invisible to the public and only accessible to Gareth Bradley.

Thanks for keeping DEV Community safe. Here is what you can do to flag garfbradaz:

Unflagging garfbradaz will restore default visibility to their posts.