Have you ever had to manually install an operating system from scratch to create base images for use in the cloud? Are you required to periodically rebuild these base images because of patches and updates? Are you working on a packer plugin? This blog post introduces an end to end DevOps pipeline for creating base images from OS install disks in ISO format.

How will this work?
This process relies on the nested virtualization feature available in Azure. First, A builder VM capable of running nested VMs will be created. Then within the builder VM, packer will be used to create the base images. Once the image creation process is complete, images are copied from the builder VM to Azure storage. From there, these images can be used to create VMs or used as source images in a separate pipeline based on the packer Azure Builder.

Requirements
There are a few different tools required to fully automate this process. If you are not familiar with any of them it would help to read up on them before proceeding.

The Repository
The source code repository for this pipeline will contain a set of bash scripts and the config files required for configuring the builder and nested VMs. Please download them from my Github account and upload to your Azure DevOps repository. You also have the option of using a Github repository as the source of a DevOps pipeline.

The Builder VM
The cloud-init.yaml is used to configure the Ubuntu Builder VM. This vm will be created using the latest Ubuntu image in the Azure Marketplace. The cloud init file will also contain a base64 representation of the bash scripts required to install packer, build dependencies and config files. Keep in mind that this file is only used as a template. The gen-init.sh script replaces all file paths in cloud-init.yaml with the base64 representation of the file and saves the result to cloud-init-gen.yaml. Please add this file to your .gitignore as it should be generated during the build process.

The packer-build.sh script will be used to build the image. It will be run from Azure DevOps using the Azure CLI run-command feature. This feature allows you to run a command within an Azure vm without an SSH connection. Learn more about run-command here.

The Pipeline
The build pipeline consists of 4 agent jobs.

It is very important that each job is configured to depend on the preceding job. Otherwise Azure DevOps might run them out of order. Technically, these tasks can all run within a single agent job. However, they are separated to stay within the 30 minute run time allowed on hosted agents in the free tier. 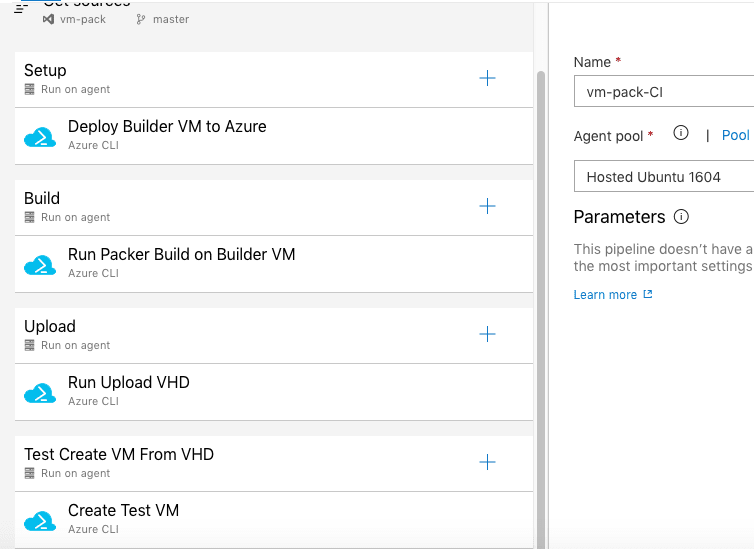 Troubleshooting
If your image isn't being built for some reason I recommend using remote desktop to troubleshoot. The script configures the image builder vm to enable RDP access to allow frictionless troubleshooting.

Summary
If everything goes right you should have a virtual machine based on the custom VHD generated in your pipeline. When you are happy with the results, create an Azure CLI task responsible for deleting the resource group. I published the exported pipeline and all the scripts mentioned in this post to my github repository. Feel free to create issues and make contributions.