The Builder Pattern is a creational Gang of Four (GoF) design pattern, defined in their seminal book Design Patterns: Elements of Reusable Object-Oriented Software, in which they presented a catalogue of simple and succinct solutions to commonly occurring design problems.

Whenever an object can be configured in multiple ways across multiple dimensions, the Builder Pattern can simplify the creation of objects and clarify the intent. 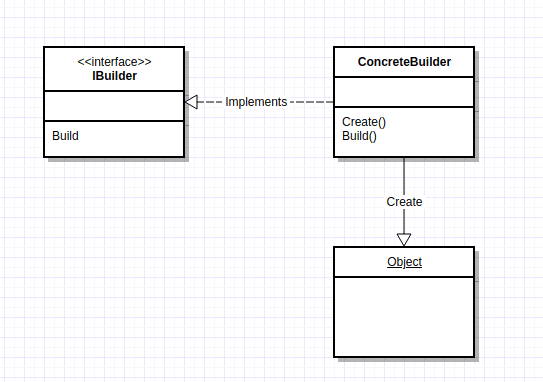 Let's explore the Builder Pattern and how developers can use it to construct objects from components. You may have already seen that the Factory Pattern returns one of several different subclasses, depending on the data passed in arguments to creation methods.
We'll now learn that the Builder Pattern assembles a number of objects in various ways depending on the data.

Advantages of the Builder Pattern

The builder pattern is similar to the Abstract Factory Pattern in that both return classes made up of a number of other methods and objects.

In his book Adaptive Code Gary Maclean Hall states the builder pattern is useful for encapsulating and abstracting the creation of objects, and provides an example of using the builder pattern to help clarify the intent of unit tests, by assisting to eliminate any unnecessary arrange code.

In 1994, the so called Gang Of Four (GOF) published their book Design Patterns: Elements of Reusable Object-Oriented Software in which they presented a catalog of simple and succinct solutions to commonly occurring design problems.

The book captured 23 Patterns that enabled software architects to create flexible, elegant and ultimately reusable design patterns without having to rediscover or reinvent the design solutions for themselves.

Through a series of blog posts on garywoodfine.com I will discuss these patterns and more on how C# .net core developers can implement these patterns in cross platform .net core software solutions.

In this example, we are going to implement a very simple Builder Pattern and use it to create a Person class to contain some attributes to describe a person

You may notice that we make use of an Enum to contain the value of the gender.

There is nothing all that complicated about the class, it's a simple POCO class. We can now develop our Builder class, which again we will keep simple to help illustrate the point. The builder class will basically return the object in a string format.

The builder class in its simplest guise just a series of name constructor methods with arguments, you'll notice that they always return an instance of the class. The final method on the builder class is Build method will return the completed object. By convention this method is typically named Build or Create or something similar.

We can now make use of our Builder to create a person as follows.

We build the object by instantiation the PersonBuilder then adding the properties, then the final method we call is the Build method. We then simply call the ToString() method to write out our values.

In the above code, I intentionally introduced a code smell, in the ToString(), you'll notice there is a lot of string interpolation and even additional concatenation. I primarily because I wanted to highlight how the .net core makes use of the builder pattern.

We can now refactor our ToString() method as follows.

We use the StringBuilder to create the string. You'll notice, that even though I said by convention you could use the Build or Create to define the method that will return your object, but you don't really need to rather you could opt for another name, in the case of StringBuilder it is ToString()

In the above example, we have implemented a simple builder pattern, however, it probably isn't easy to determine why this actually provides any benefit to developers. After all, from this simple implementation, you might be thinking but surely we could just simply use C# object initialisation and get exactly the result.

The problem with this approach is that it is vry similar to passing arguments to a function, which inadvertently adds complexity to understanding the code.

The ideal number of arguments for a function is zero (niladic). Next comes one (monadic), followed closely by two (dyadic). Three arguments (triadic) should be avoided when possible. More than three (polyadic) requires very special justification – and then shouldn’t be used anyway.

There will invariably be situations when instantiating objects that you will need to call a function to do something to provide a value to that object. i.e. Generate a new ID which may need calling out to function to get a newly created Id value etc.

It is in situations like this that make the Builder pattern a much more viable option, and as defined in Philosophy of Software Design we are able to pull complexity downwards.

When developing a module, look for opportunities to take a little bit of extra suffering upon yourself in order to reduce the suffering of your users.
John Ousterhout - Philosophy of Software Design

The Builder pattern provides step-by-step creation of a complex object so that the same construction process can create different representations is the routine in the builder pattern that also makes for finer control over the construction process. All the different builders generally inherit from an abstract builder class that declares the general functions to be used by the director to let the builder create the product in parts.

The Builder pattern is applicable when the algorithm for creating a complex object should be independent of the parts that make up the object and how they are assembled and the construction process must allow different representations for the object constructed.

If we consider a person object and think of all the different variations we could expect to create a person object. For instance, how do we deal with married woman? Considering in some cases we may need to take into consideration her maiden name.

It soon becomes clear that there are all manner of rules and variations we need to consider when building a person object. All manner of varying combinations and additional properties we will need to include.

Rules that may not be easy or convenient to incorporate in object initialization. We will also need to have the flexibility and adaptability to change or add additional methods in future developments.

In our first implementation of builder for a fluent interface of the Person class, we implemented the builder with no strings attached. We have not enforced rules for the order of assignment.

The code is simple and easy to understand but it does leave the builder class open to misuse. We can implement the basic expression builder with method chaining in C# .NET.

We're going to refactor our builder slightly to incorporate a new method Create which will accept Firstname and Lastname argument but more importantly we are going to remove the creation of the Person class from the constructor
and into Create method.

It also doesn't make much sense providing and Id to an object on creation, it is highly likely that a new Id should be created when the object is created. So we'll also remove the Id parameter from the Builder.

To guide the user and enforce rules of construction (such as, the Class can only be assigned once, followed by attributes), we utilize progressive interfaces. Where the method would return “this”, we instead return an interface for the next step in line.

We’ve implemented the Expression Builder pattern using method chaining. The class itself constructs a Person for us. We may then call any of the assignment methods to populate the fields and attributes of the Character class. Each method returns a copy of itself, allowing us to chain the assignment methods, one after the other, thus implementing our fluent interface in C# .NET. We can then finally call the Build() method to obtain the completed Person class.

We examined the Builder Pattern and seen how useful it is too create complex objects. We also looked at an example of how the .net core framework itself makes use of the builder pattern to provide common functionality string building functionality.

What are self integrating applications?

Once suspended, gary_woodfine will not be able to comment or publish posts until their suspension is removed.

Once unsuspended, gary_woodfine will be able to comment and publish posts again.

Once unpublished, all posts by gary_woodfine will become hidden and only accessible to themselves.

If gary_woodfine is not suspended, they can still re-publish their posts from their dashboard.