The Prototype Design Pattern is one of the Creational Design Patterns defined by the Gang Of Four (GOF) published their book Design Patterns: Elements of Reusable Object-Oriented Software in which they presented a catalog of simple and succinct solutions to commonly occurring design problems.

The Prototype pattern is specifically used when creating a duplicate object of an existing object while attempting to conserve resources and focus on performance.

Creating a Software Developer object, is a very resource intensive and time consuming process. What happens you need another 10 of these objects ? Wouldn't it be great if we could just clone our existing copy of the software developer, which already has all the attributes and properties we need instantly?

This is the type pf scenario that Prototype Pattern serves to address. The pattern provides a prototype interface which enables creating a clone of the current object. This pattern is used when creation of object directly is costly. For example, an object is to be created after a costly database operation. We can cache the object, returns its clone on next request and update the database as and when needed thus reducing database calls.

A typical implementation of the Prototype pattern could modelled as follows 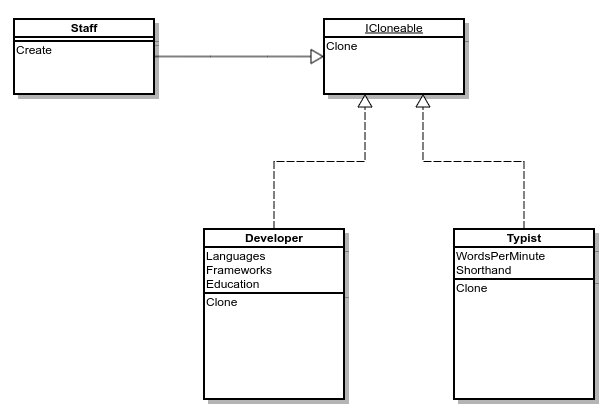 In 1994, the so called Gang Of Four (GOF) published their book Design Patterns: Elements of Reusable Object-Oriented Software in which they presented a catalog of simple and succinct solutions to commonly occurring design problems.

The book captured 23 Patterns that enabled software architects to create flexible, elegant and ultimately reusable design patterns without having to rediscover or reinvent the design solutions for themselves.

Through a series of blog posts on garywoodfine.com I will discuss these patterns and more on how C# .net core developers can implement these patterns in cross platform .net core software solutions.

A class may implement an ICloneable Interface which requires the class to implement a Clone method.

The .net framework provides developers with the ICloneable Interface

The ICloneable interface simply requires that your implementation of the Clone() method return a copy of the current object instance.

The developer is free to choose any implementation to perform the clone operation i.e. Deep, Shallow or Custom copy of the object.

In the first simple implementation of the Prototype Pattern, we'll create a Developer class that implements ICloneable interface which preforms a MemberwiseClone operation.

The MemberwiseClone method creates a shallow copy by creating a new object, and then copying the nonstatic fields of the current object to the new object.

We can now implement our basic client App to instantiate an initial Developer object then we will create a Second version of the object making use of the Clone method that is available. We will then just inspect the cloned developer to check the FirstName it has been defined.

If you run the application you'll notice that the Second instance of the Developer has all the same properties of the first one instantiated.

Applications for the Prototype Pattern

The Prototype Pattern is useful when you need to be able to quickly create new instances of objects based on other objects.

Advantages of the Prototype Design Pattern

The Prototype Pattern is another tool you can use when you can specify the general class needed in program but need to defer the exact class until execution time. It is similar to the Builder Pattern in that some class or method decides what components or details make up the final instantiated class. However, it differs in that the target classes are constructed by cloning one or more classes and then changing or filling in the details of the cloned class to behave as desired.

Prototypes can be used whenever you need classes that differ only in the type of processing they offer.

Any change you make in one clone of the object is immediately reflected in the other because in fact there is only one object.

To see this behaviour lets add some additional logic to our code, to add an additional skill to our Second Developer instance. After that lets print out our skills of our initial instance to the console.

If we run our sample we'll see that the Vue.JS has been added to our Developer instance skill set.

The prototype pattern copies or clones an existing class, rather than creating a new instance, when creating new instances is more expensive.