Many times you would encounter situations where you have a legacy codebase in front of you which has been in the market for quite a while. It may be written in a technology that is seeing a downward trend in terms of popularity. You cannot make a change very easily in the architecture of such applications as the amount of risk, testing efforts & impact is huge.
Let me run you through such a use case where we recently had to change the authentication mechanism of an existing legacy web application from a JSP session & a cookie-based authentication mechanism to an MSAL (Microsoft Authentication Library) token-based authentication method.
What this essentially means is the login should grant a token to the web application acquiring the token using MSAL (react-msal) in our case & the same token should be used for making further calls to the server.
Read more about MSAL tokens here:
https://github.com/AzureAD/microsoft-authentication-library-for-js/blob/dev/lib/msal-browser/docs/acquire-token.md

There are two challenges we are looking at:

Adding to the complexity of the application, the code base grew up with a lot of acquisitions of companies adding to the integrations in the existing codebase. Thus the application grew horizontally in terms of technology over the last 10 years.

Also when you have such a legacy codebase, it becomes hard to keep the knowledge fresh. There are pieces of the code that developers might not have even looked at for a long long time. Touching such code may result in unaccounted for side effects as the application has a significant number of customers who are using different versions & flows of the application.

How can we have a centralized solution which avoids making changes to a lot of files?

Service workers & promises to the rescue.
We try to avoid changes in the front-end code updating the APIs to authenticate based on the incoming MSAL token.
The solution is to capture all the network calls originated from the web application & append a bearer token in the HTTP header in the request. 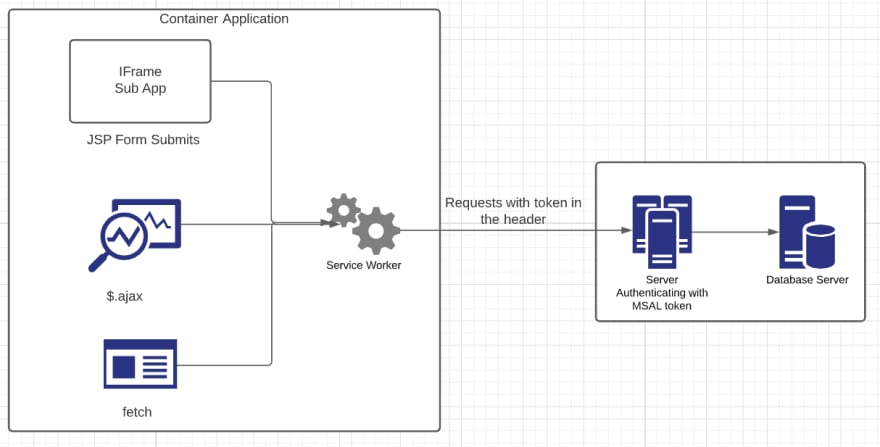 Now let us get the right token.

Here comes the tricky part. A service worker comes with its own limitations, it has no access to DOM & it can’t access shared storage between the page & itself. Somehow we need to get the token from the main thread & the container app.
Here is a good article explaining how to establish communication between a service worker & the container page.

We choose the Broadcast API to get away with the need of the two parties to remember the ports to have a 1:1 communication channel.

Changes in the container app

The container app now needs to listen to the messages on the same broadcast channel & respond with a token.
This allows up to keep the front end legacy code as-is & at the same time have a new authentication mechanism.

Once suspended, gauravbehere will not be able to comment or publish posts until their suspension is removed.

Once unsuspended, gauravbehere will be able to comment and publish posts again.

Once unpublished, all posts by gauravbehere will become hidden and only accessible to themselves.

If gauravbehere is not suspended, they can still re-publish their posts from their dashboard.

Once unpublished, this post will become invisible to the public and only accessible to Gaurav Behere.

Thanks for keeping DEV Community 👩‍💻👨‍💻 safe. Here is what you can do to flag gauravbehere:

Unflagging gauravbehere will restore default visibility to their posts.