When executing a particular task using algorithms, one common thing that hits every problem solver brain is the efficient and fast algorithm to solve that problem. But, what do exactly fast and efficient means?

Is it the measure of real processing time?

So, run time of program can't be considered to measure algorithmic efficiency.

Hence, to measure the algorithmic efficiency, the concept of Asymptotic Complexity of a program and a notation for describing this called Big O  was introduced. Big O is the worst case, Big Omega and Big Theta are best and average case notations. Worst case means we are mostly unlucky for that problem domain , i.e precondition of task do not favour us. Complexity analysis is a tool that allows us to explain how an algorithm behaves as the input grows larger.

Counting the number of character in a string:

One simplest approach is traversing through whole string letter by letter and incrementing a counter variable by 1. This algorithmic approach run in linear time with respect to number of character 'n' in the string, i.e, it runs in O(n).

Another approach is, declaring a variable and storing the number of character in a variable say "length" early in the program, i.e, before storing the very first character. Now, there is no need to look at string, instead one have to check the value of that variable. The accessing of such variable is generally asymptotically constant time operation, or O(1). This is because Asymptotic means "How the run time change as input grows". In this approach the length of string whether it has one character or thousandsof character, the only thing we need to do is to find string length and which can be done by reading the "length" variable and the reading time for this variable is constant regardless of string size. Hence this approach can be referred as running in constant time.

The O(1) does not change with the size of inputs.

There are many different Big O runtimes like O(n), O(n²) etc

This dosen't means O(n) always run faster, maybe if input is smaller then  O(n²) may work faster yet unnoticed

Similarly, we may have logarithmic O(log(n)) for some cases like in Binary search. Binary search cut the array size in half with each operation.

Simpler Program can be analysed by counting number of nested loop. 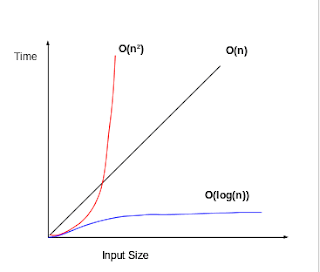 Why you should write blogposts more often