Due to the current pandemic, all in-person conferences were either getting cancelled, postponed, or turning virtual.

GitHub Satellite 2020 was no exception.

This year, on May 6th 2020, for the first time ever, GitHub Satellite was hosted virtually and free to attend for everyone.

As a GitHub Campus Expert, I had the opportunity to attend the live stream watch-party with my fellow CEs. The watch-party got a shoutout from the COO of GitHub, Erica Brescia, during closing remarks! 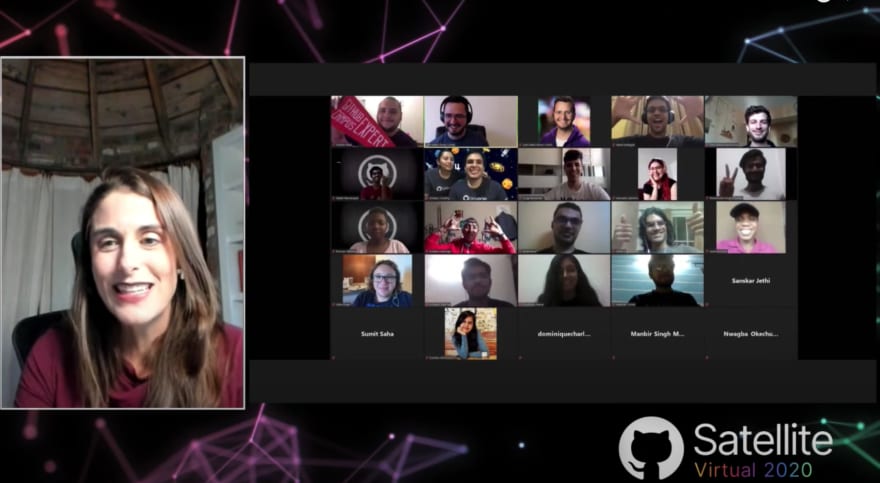 The event started off with an improvised DJ session live coded with Sonic Pi by Sam Aaron. I love when people mix other forms of art with code and this was a perfect example of it.

Soon the countdown for the keynote by the CEO of GitHub, Nat Friedman, began. A fun little skit of Nat pretending to be late for the conference and eating cheerios was fun to watch. I was in awe of the shelf that he had in the background. It was so well organized and the random GitHub swag made it even cooler.

The keynote started off with a recap of the announcements and work that had been done since last year's conference in Berlin, such as GitHub actions, GitHub for mobile, GitHub sponsors, and the acquisition of npm.

Another big milestone for GitHub was reaching 50 million sign-ups to the platform on Sunday, April 6th, 2020 at 4:06 pm PDT. The person turned out to be from Great Britain unless of course, they were using a VPN.

Some data regarding the increased usage of the platform since January was also shared. This is where Nat said, "In this age of social distancing, people are turning to social coding" which truly struck a chord with me.

It was then time to hear some exciting announcements for this year in four key areas; community, code, enterprise, and security.

On a less technical note, I was very much fond of the icon designs throughout this presentation. They were intuitive but also had a fun cartoony style to it.

I dabbled a bit into icon design using Adobe Illustrator myself earlier last month and found it challenging to wrap my head around all the different tools that need to be used to create vector icons. Since then I have a lot more appreciation towards logos and icon design than I did before.

Personally, if I am being completely honest, as a student developer, I did not care much about enterprise and security announcements. But the new features for community and code got me super excited!

With the community announcement, GitHub showed that it listens to its developers' needs and implement changes accordingly.

GitHub Issues was added to help developers track work and co-ordinate with each other, GitHub PRs were implemented to help developers collaborate and review code, so this year hearing that the community needed a space to connect, ask open-ended questions and celebrate accomplishments, GitHub Discussions was introduced.

It has features to spotlight and upvote discussions, create dedicated links for CoC and have subcategories to better organize the discussion topics.

This seems like a great way to de-clutter all the non-immediate-work related but still very important Issues that were probably open in your repo by enthusiastic contributors and users of the project.

It is due to arrive at a repository near you this summer but you could have a go at it here in the GitHub Satellite 2020 repo.

Coming to the next and most exciting announcement of all, Codespaces!

I want to commend Nat on the way he introduced the concept of Codespace to the audience.

He began with addressing the questions he's been asked many times before, "How do I become an open-source contributor?"

The answer to that is first finding a project that you want to contribute to, and then getting it built and run on your local computer.

Unfortunately, oftentimes than not, this first step is not as easy as it seems. Most of the time there are pre-requisites to be installed, paths to be configured and some of these could conflict with your existing configurations that could take a lot of time and energy to troubleshoot.

I have first-hand experience with this when I tried to become a coala contributor, a couple of years back for Hacktoberfest, and even though the community was responsive and ready to help me with my questions, it was super intimidating to set-up and run the project locally as a newbie developer, so I just gave up midway, feeling defeated and disheartened.

Since then I have always hoped for a simpler set-up process, perhaps one that could be done simply with a click of a button, and that is exactly what Codespaces is!

I shrieked at this announcement because it hits too close to home.

But what is even better is that it is powered with Visual Studio Code, so it supports every VS Code extension right from the get-go.

Considering it is a cloud-hosted dev environment, it is justified that it is not free to use (for now) and will be offered as a pay-as-you-go service.

I would also like to say as a self-taught iOS developer that dislikes the fact that owning a MacBook is a prerequisite to starting your iOS coding journey, I hope the ideology behind Codespaces is adopted for XCode too that would lower the barrier to entry and empower developers that are not able to take part in iOS development just because they don't own a Macbook.

I guess if I am dreaming big with hoping for a cloud-based XCode editor, I might as well put another wish out there that I thought of while watching the keynote.

The tech community is slowly growing on these social video streaming platforms but it is really hard to find them as they are still relatively small compared to other types of niches.

So if there was a way for GitHub to provide a platform to upload videos in relation to specific repos and organisations that already exist in GitHub, I think it would be really helpful for developers and the tech video content creators to find each other.

Moreover, if this could then be monetized the way YouTube and Twitch are, I consider that to truly be a win-win for the tech community.

Anyway back to my last thoughts on GitHub Satellite 2020 keynote because I have already spent 3+ hours writing this first blog post.

The keynote ended with another fun little act by Nat.

In honour of the GitHub and VSCode team that worked so hard to make these announcements a reality, Nat proceeded to blow a ceremonial kazoo and executed a balloon drop that he set it up himself in his living room. 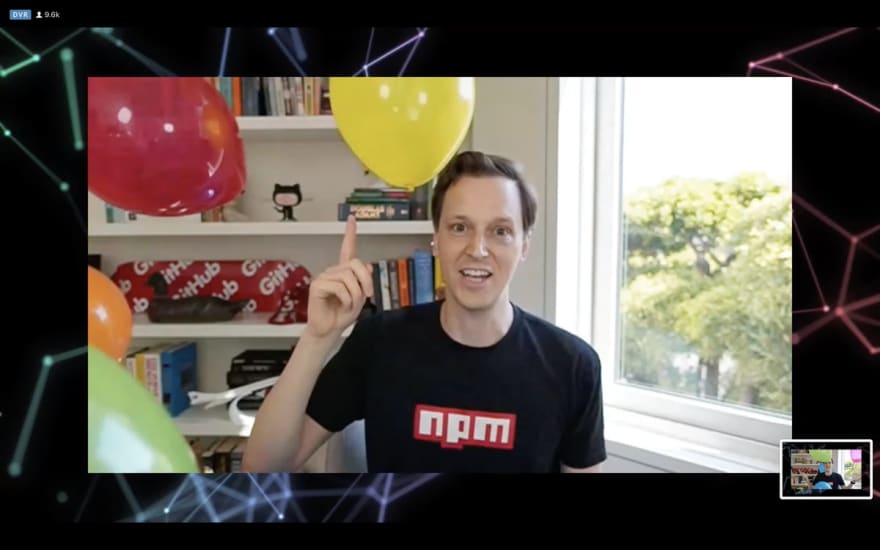 Also I successfully executed a balloon drop in my living room 🥳 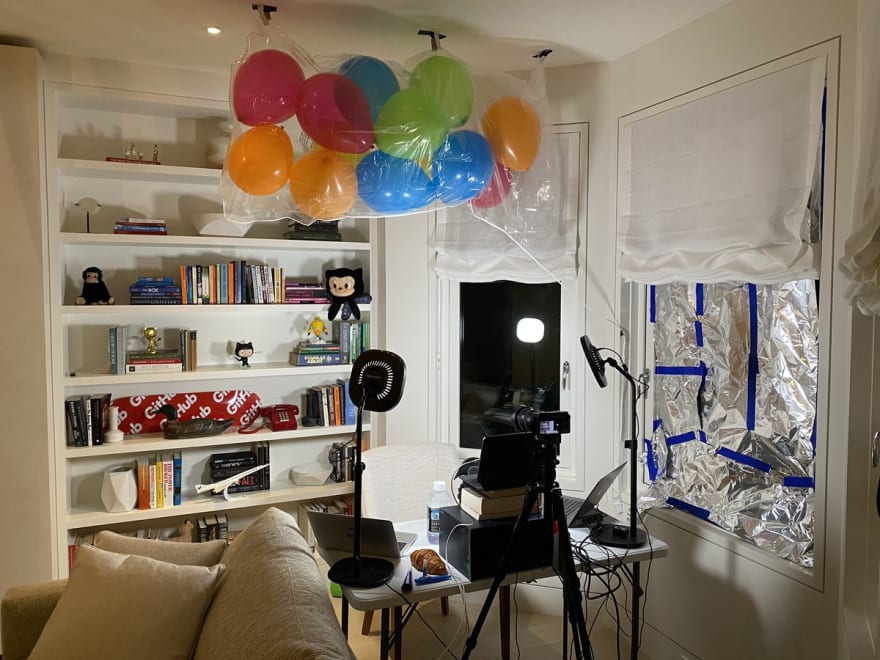 If you would like to watch the keynote yourself or find out more information about the speakers, schedule and workshops, head over to the official website.

All in all, I am glad I was able to watch the keynote live with fellow GitHub Campus Experts, especially because I met quite a few of them in-person last year in Berlin during Satellite 2019, so it was really nice to see and hear them during the watch-party.

I guess I'll end this post by attaching a group picture from last year's event: 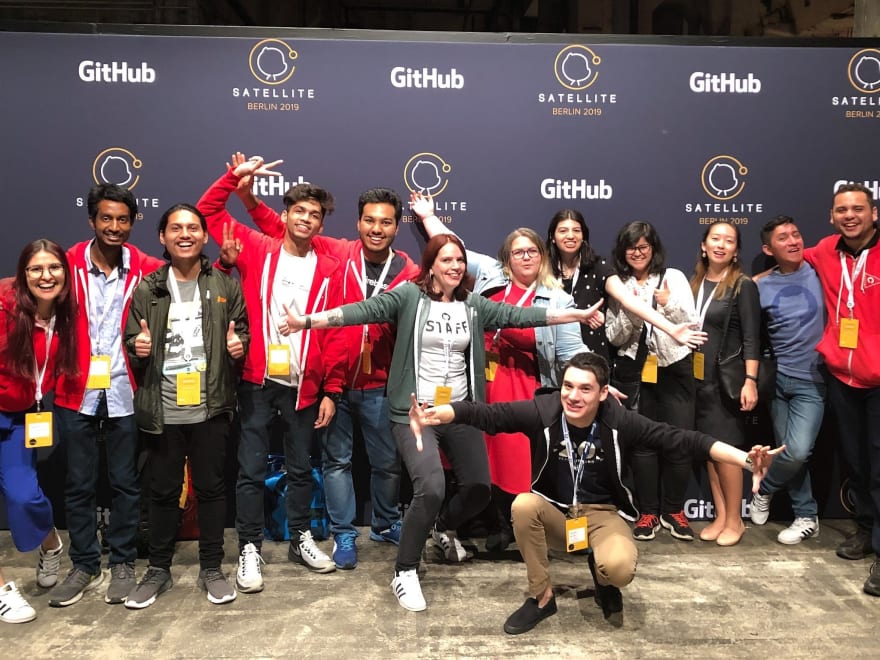 Other than that, stay safe, wash your hands, and I hope we all get through this pandemic soon.

Top five Godot games and source code from Game Off 2022

Once unpublished, this post will become invisible to the public and only accessible to Iqrah Nadeem.