Can it run on Glitch? That’s the question I ask myself every time I see someone mention a cool open source software project. A month or so I saw some discussion of Gogs, a self-hosted git service. It's basically a DIY version of GitLab, Bitbucket, or Github.

The catch? Gogs runs in Go. While Glitch can support almost any language, most of our features are tailored for Node.js. So I was really curious if I could get it to run. We have a couple of sample Go projects like go-example and go-glitch-sample. To make a Glitch app use Go, you put in a special file called glitch.json. It tells Glitch that instead of running the default “npm start” when you open your project, to run whatever is defined as “start” in glitch.json

I installed Gogs from binary1. And it seemed to work ok. But I hit a snag. There were so many directories in the project that they made the Glitch editor load much slower. So I hid them. To do this I moved to directories with a dot prefix like like “.scripts”. Voila, my Glitch project was much faster.

Then I tried installing and I got a weird error message “Run user isn't the current user: app ->” which didn’t give me much to go on. I tried a lot of random things and nothing worked. I finally went into the gogs codebase and found the line that error came from. It expected an environment variable called USER. I changed my start command in glitch.json to set that.

Gogs has many of my fav git hosting features like pull request reviewing and a visual interface for exploring the code and commits. 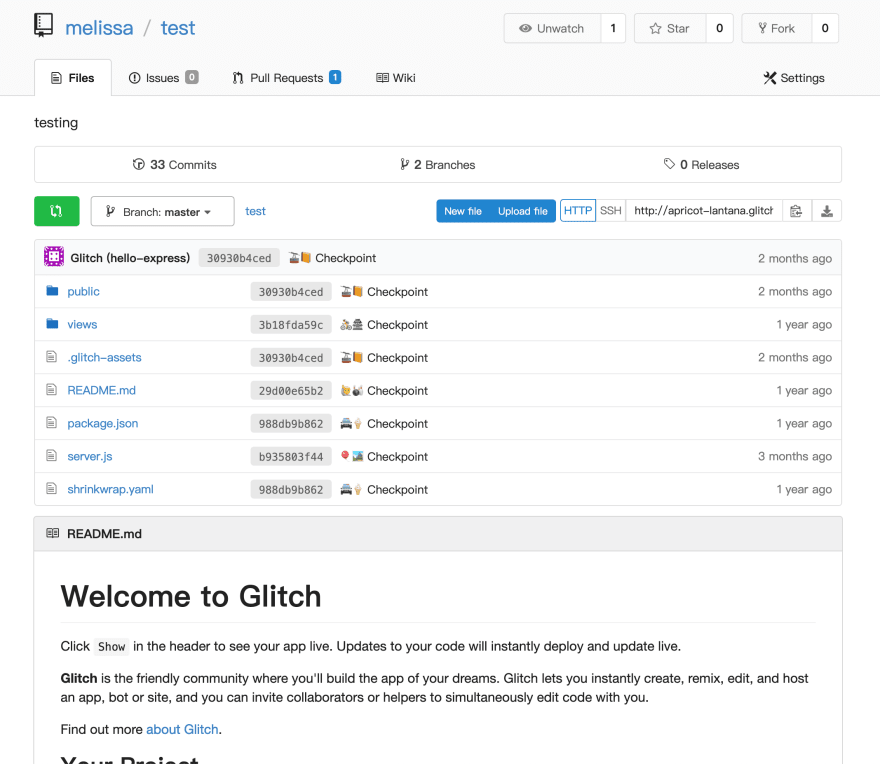 It has some great features including:

I wanted to make this easy to “remix” which is a Glitch term for getting your own copy. So I added some files and directories to a file called .gitignore, so you won’t get my repositories when you get your own copy. I haven’t gotten email notifications working yet, but I might try Sendgrid for that.

If you try it out let us know what you think in the comments!

Concurrency in Golang with a Binary Search Problem

Serving Single-Page Application in a single binary file with Go

Once suspended, glitch will not be able to comment or publish posts until their suspension is removed.

Once unsuspended, glitch will be able to comment and publish posts again.

Once unpublished, all posts by glitch will become hidden and only accessible to themselves.

If glitch is not suspended, they can still re-publish their posts from their dashboard.

Thanks for keeping DEV Community safe. Here is what you can do to flag glitch:

Unflagging glitch will restore default visibility to their posts.