We have been working on reducing the amount of bytes that we send to all Fider users. Being a web application built with React, we have focused on JS and CSS. On this post we share our learnings, some concepts and suggestions on how you can do the same with your web application.

Fider is built with React and Webpack on the frontend, so the topics below will be mostly useful for teams using same stack, but the concepts can also be applied to other stacks. It is also an open source, so you can actually see the Pull Requests and the source code: https://github.com/getfider/fider

webpack-bundle-analyzer is a webpack plugin that generates an interactive zoomable treemap of all your bundles. This has been crucial for us to understand which modules are inside each bundle. You can also see which are the biggest modules within each bundle.

If you don’t know the root cause, how can you tackle it?

This is an example of what this plugin will generate for you. 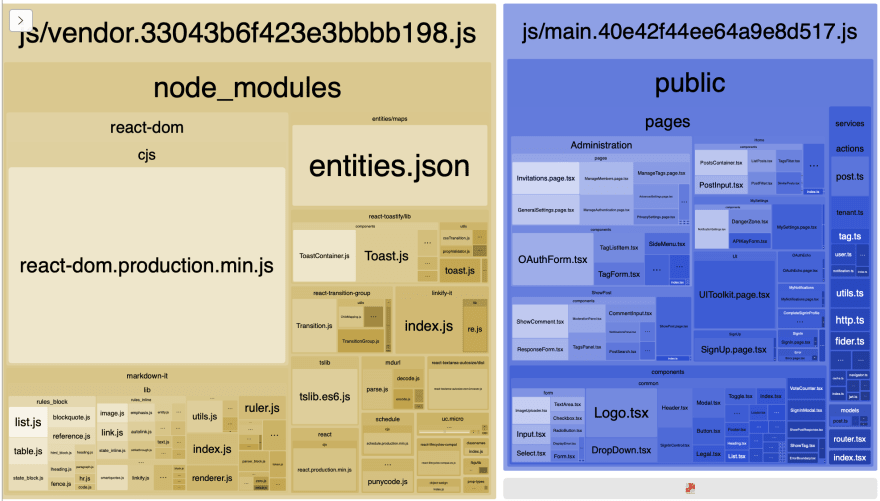 Did you notice that huge entities.json inside the vendor bundle? That's a good starting point to analyze the content of your bundle.

Long term caching is the process of telling the browser to cache a file for a long time, like 3 months or even 1 year. This is a important settings to ensure that returning users won’t need to download the same JS/CSS files over and over again.

The browser will cache files based on its full path name, so if you need to force the user to download a new version of your bundle, you need to rename it. Luckly webpack provides a feature to generate the bundles with a dynamic name, hence forcing the browser to download new files only.

We have previously used chunkhash for a long time on our webpack configuration. 99% of the cases where you want long term cache, the best option is to use contenthash, which will generate a hash based on its content.

Combining all the NPM packages into a separate bundle has been a long time practice for many teams. This is very useful when combined with long term caching.

NPM packages change less often than our app code, so we don’t need to force users to download all your NPM packages if nothing has changed. This is usually called the vendor bundle.

But we can take this practice one step further.

What about your own code that also change less often? Maybe you have a few basic components like Button, Grid, Toggle, etc. that have been created some time ago and haven't changed in a while.

This will ensure that, unless we change our base components, the user won’t need to redownload it.

Code splitting is currently a hot topic. This has been around for some time, but the tools and frameworks have evolved a lot, to the point where doing code splitting is much simpler now.

It’s very common to have applications that push one big bundle that contains all the JS/CSS required to render any page within the application, even if the user is only looking at the Home page. We don’t know if the user will ever visit the Site Settings page, but we have pushed all the code for that already. Fider has been doing this for a long time and we now have changed it.

The idea of Code Splitting is to generate multiple smaller bundles, usually one per route, and a main bundle. The only bundle we send to all the users is the main bundle, which will then asynchronously download all the required bundles to render the current page.

It seems complicated, but thanks to React and Webpack, this is not rocket science anymore. For those using React <= 16.5, we recommend react-loadable. If you’re already on React 16.6, then you can use React.lazy() which has been a new addition to this version.

We also had issues with some rare events where users were having issues to download asynchronous bundles. A potential solution has been documented on How to retry when React lazy fails.

By using the Webpack Bundle Analyzer we noticed that our vendor bundle had all the content of react-toastify, which is the toaster library that we use. That is usually ok, except that 95% of the Fider users will never see a toaster message. There are very few places we show a toaster, so why do we push 30kB of JavaScript to every user if they don’t need it?

This is a similar problem to the one above, except that we are not talking about routes anymore, this is a feature used in multiple routes. Can you code split on a feature level?

In a nutshell, what you have to do is switch from static import to dynamic import.

Webpack will bundle the toastify module and all its NPM dependencies separately. The browser will then only download that bundle when the toast is needed. If you have configured long term caching, then on the second toaster call it won’t have to download it again.

The video below shows how it looks like on the browser.

Tree Shaking is the process of importing only what you need from a module and discarding the rest. This is enabled by default when running webpack on production mode.

The usual approach to use Font Awesome is to import an external font file and a CSS that maps each character (icon) on that font to one CSS class. The result is that even though we only use icon A, B and C, we are forcing the browsers to download this external font and a CSS definition of 600+ icons.

Thankfully we found react-icons, a NPM package with all free Font Awesome (and other icon packages too!) in a SVG format and exported as React Components on a ES Module format.

You can then import only the icons you need and webpack will remove all other icons from the bundle. The result? Our CSS has is now ~68kB smaller. Not to mention that we don’t need to download external fonts anymore. This change was the biggest contributor on reducing the CSS size on Fider.

"NPM is like a lego store full of building blocks that you can just pick whichever one you like. You don’t pay for the package you install, but your users pay for the byte size that it adds to your application. Choose wisely." - @goenning

While using the Bundle Analyzer we found that markdown-it alone was consuming ~40% of our vendor bundle. We have then decided to go shopping on NPM and look for an alternative markdown parser. The goal was to find a package that was smaller, well maintained and had all the features we needed.

We’ve been using bundlephobia.com to analyse the byte size of any NPM package before installing it. We have switched from markdown-it to marked, which reduced ~63kB from our vendor bundle with minimal API change.

You can also compare these two packages on bundlephobia:

Think twice before adding a large package. Do you really need it? Can your team implement a simpler alternative? If not, can you find another package that does the same job with less bytes? Ultimately, you can still add the NPM package and load it asynchronously like we did with react-toastify mentioned above.

Optimising the main bundle is crucial

Imagine that you have an application doing code splitting by route. It’s already running in production and you commit a change to your Dashboard route component. You might think that Webpack will only generate a different file for the bundle that contain the Dashboard route, correct?

Well, that’s not what actually happens.

So if your main bundle contains not only the pointers, but also a lot of common components like Buttons, Toggle, Grids and Tabs, you’re basically forcing the browser to redownload something that has not changed.

Use the webpack bundle analyzer to understand what’s inside your main bundle. You can then apply some of the techniques we’ve mentioned above to reduce the main bundle size.

When compiling TypeScript code to ES5, the TypeScript Compiler will also emit some helper functions to the output JavaScript file. This process ensures that the code we wrote in TypeScript is compatible with older browsers that doesn’t support ES6 features like Classes and Generators.

These helper functions are very small, but when there are many TypeScript files, these helper functions will be present on every file that uses a non-ES5 code. Webpack won’t be able to tree shake it and the final bundle will contain multiple occurrences of the very same code. The result? A slightly bigger bundle.

Thankfully there’s a solution for this. There is a NPM package called tslib that contains all the helper functions needed by TypeScript. We can then tell the compiler to import the helper functions from the tslib package instead of emitting it to the output JavaScript file. This is done by setting importHelpers: true on the tsconfig.json file. Don’t forget to install tslib with npm install tslib —save.

The amount of bytes this can reduce from the bundle will depend on the amount of non-ES5 files, which can be a lot on a React app if most of the Components are classes.

The next billions users

Are you ready for the next billion users? Think about all the potential users of your app that currently struggle to use it on a low-cost device and slower network.

Reducing the byte size of our bundles has a direct impact on the performance of our applications and can help us make it more accessible to everyone. Hopefully this post can you help on this journey.

Getting started with Bootstrap 5

How to Extend and Build Custom Resolvers with Strapi v4

Once suspended, goenning will not be able to comment or publish posts until their suspension is removed.

Once unsuspended, goenning will be able to comment and publish posts again.

Once unpublished, all posts by goenning will become hidden and only accessible to themselves.

If goenning is not suspended, they can still re-publish their posts from their dashboard.

Once unpublished, this post will become invisible to the public and only accessible to Guilherme Oenning.

Thanks for keeping DEV Community safe. Here is what you can do to flag goenning:

Unflagging goenning will restore default visibility to their posts.