The team I work on at Google manages 300+ repositories, across
7 languages, developed in the open on GitHub. We release new library versions to package managers, such as Maven, npm, and PyPi, 100s of times each month: 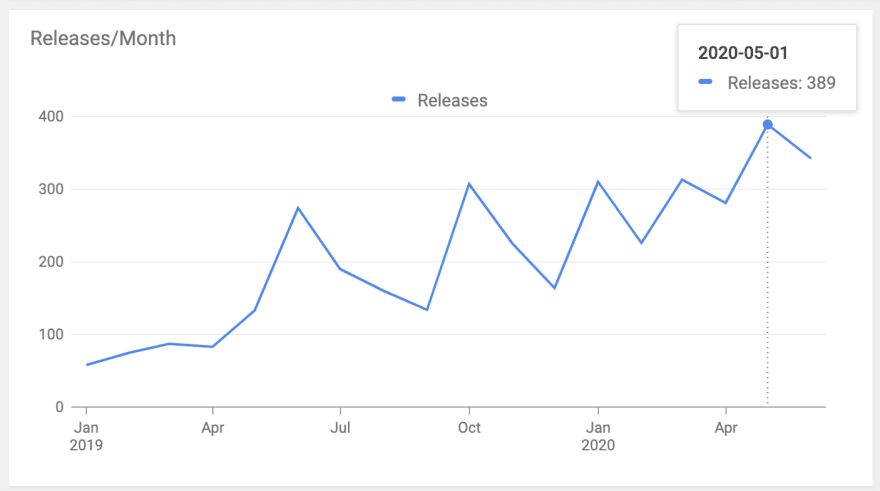 Releasing a library isn't simply a matter of publishing code to a package manager. Most of our libraries use SemVer for versioning. SemVer formalizes the concept that the MAJOR, MINOR, and PATCH in versions ([MAJOR].[MINOR].[PATCH]) should be used to communicate the nature changes to your user:

It's important that we increment the correct MAJOR, MINOR, or PATCH, when releasing a new library version. However, a version number alone doesn't provide enough information when upgrading. A changelog (a human readable record of software changes, usually stored in ./CHANGELOG.md) is important because it communicates to the user:

Who needs a changelog? People do. Whether consumers or developers, the end users of software are human beings who care about what's in the software. When the software changes, people want to know why and how.

Humans aren't great at this

Manually choosing a new version number when releasing is error prone. Will you know that your peer introduced a small breaking change two days prior?

Manually writing release notes is time consuming. I found myself spending 20 minutes per-release (for those doing math, this would have meant we spent 130 hours writing release notes in May). It's also error prone... did we call attention to the appropriate features, did we document all the breaking changes?

We found ourselves with two potentially competing goals:

The remainder of this post introduces a convention we've adopted, and a tool we've written (and open sourced 🎉), to reconcile the goal of creating releases that are both meaningful and automated.

Commit messages provide important context for both other collaborators and the users of your library. I believe this, but when I look back at various projects the commits are bit of a hodgepodge:

What update was made to the changelog? why was I a terrible person? what does #148 fix?

There must be a better way!

In 2011 Igor Minar and Vojta Jína, while working on the Angular project, had the brilliant idea of introducing a lightweight convention on top of commit messages. Their original design document describes the following goals:

They go on to propose the format:

A commit message ends up looking something like this:

These Angular commit guidelines inspired Conventional Commits, which is the commit convention my team adopted.

The Conventional Commits spec proposes a superset of Angular's guidelines:

The goals of the Conventional Commits Specification were to:

Conventional Commits felt like the perfect choice for my goal of getting folks across 6 language teams to adopt a convention — I appreciated the slightly trimmed down rules.

Once repos began adopting Conventional Commits, we were able to start automating parts of our release process that had been manual, i.e., generating a CHANGELOG.md, choosing the next library version, publishing to a package registry.

The process was gradual. Rather than forcing teams to use commit conventions, I thought that it would be better to demonstrate their value. We started by automating our JavaScript release process. As I hoped, other teams were quick to follow as they saw the time it was saving. Now, a year later, we support JavaScript, Python, Java, Ruby, PHP, Terraform, and are beginning work on Go.

In parallel with adopting conventions, we developed a tool called release-please. We've made release-please extensible, so each language team is able to customize the their release process:

release-please is the tool that grew out of my team's automating the release process for 6 languages.

It does so by parsing your git history, looking for Conventional Commit messages, and creating release PRs.

What are release PRs? Our existing release processes didn't map well to continuously releasing changes as they land on a branch:

release-please creates release PRs automatically. They represent the set of changes that would be present if you were to release the library:

If a release PR is merged, release-please will create a release of your library, matching the description in the release PR.

While embracing the differences in release workflows between language communities, we've had a great experience adopting consistent commit conventions and tooling across our team.

We've done so without sacrificing an actionable CHANGELOG.md, and while successfully adhering to SemVer.

Implementing this process was an awesome experience, and I hope other teams are inspired by our success.

Once unpublished, this post will become invisible to the public and only accessible to Benjamin E. Coe.