On my last post we saw the theory behind generators in JS/TS. In this article I will apply those concepts and show how we can use generators to build something similar to async/await. In fact, async/await is implemented using generators and promises.

Delving into async with callbacks

First we will show how we can deal with asynchronicity using generators by writing an example with callbacks.

The idea is as follows. When using callbacks, we pass some function that will be called whenever the async action has finished. So what if we don't call a callback, but instead call next on some generator? Better yet, what if this generator is the code that called our async function? That way we would have a code that calls some asynchronous process, stays paused while the asynchronous process isn't finished and return its execution whenever it is ready. Check this out: 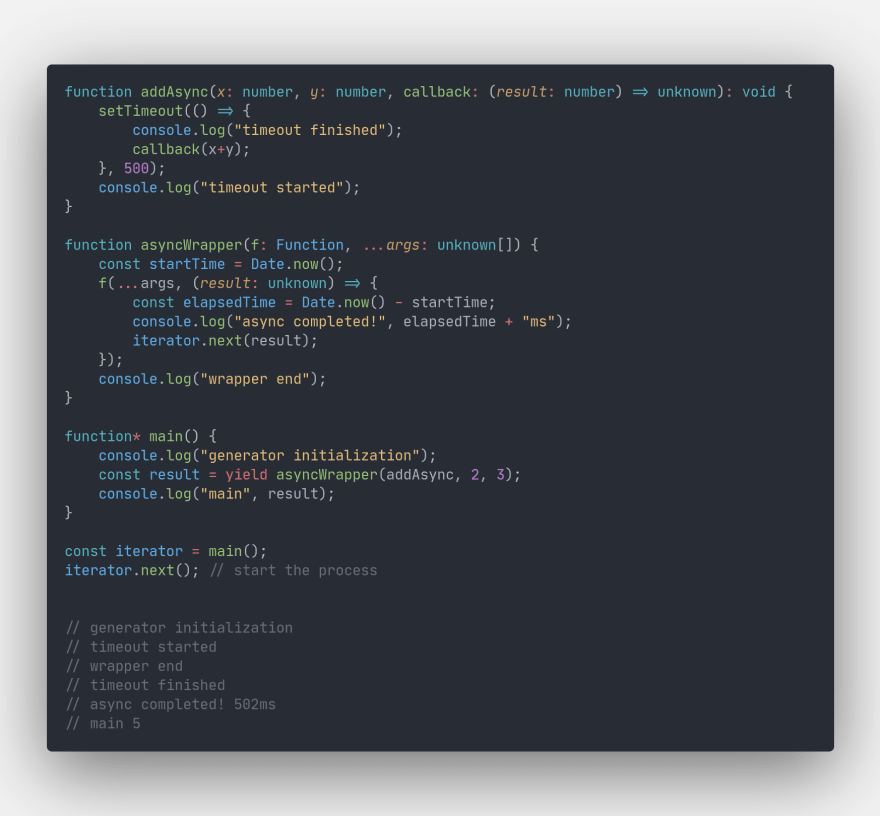 If you don't know what is ...args in the implementation above, take a look at spread syntax.
We wrap our asynchronous operations with asyncWrapper. This wrapper just pass a callback to give control back to the generator main whenever the async process is completed. Notice how our code in main looks totally synchronous. In fact, just looking at main, we can't assert if there is anything asynchronous at all, although the yield gives a hint. Also notice how our code is very similar to what it would have been with async/await, even though we don't use Promises. This is because we are abstracting away the asynchronous portions from our consuming code main.

Using callbacks like above is fine, but there are some problems.

Promises to the rescue

We can solve the problems above utilizing Promises. We will begin with a simple implementation with only one yield and no error handling and then expand it.

First we need to make our asynchronous operation addAsync return a promise, we will deal with the case that it doesn't later.

To solve 1, we need to change our wrapper to receive the code that we want to execute, becoming a runner. This way our runner does the things it needs and gives control back to our code whenever it is ready, while hiding how anything works from our code. The runner needs to do essentially two things: 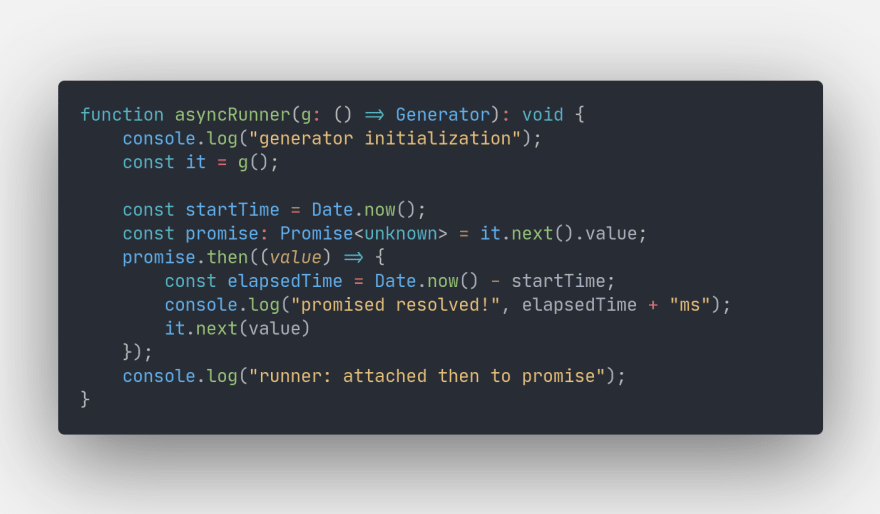 And that's it! The problem 3 from our list is automatically solved whenever we use promises. The full code is the following: 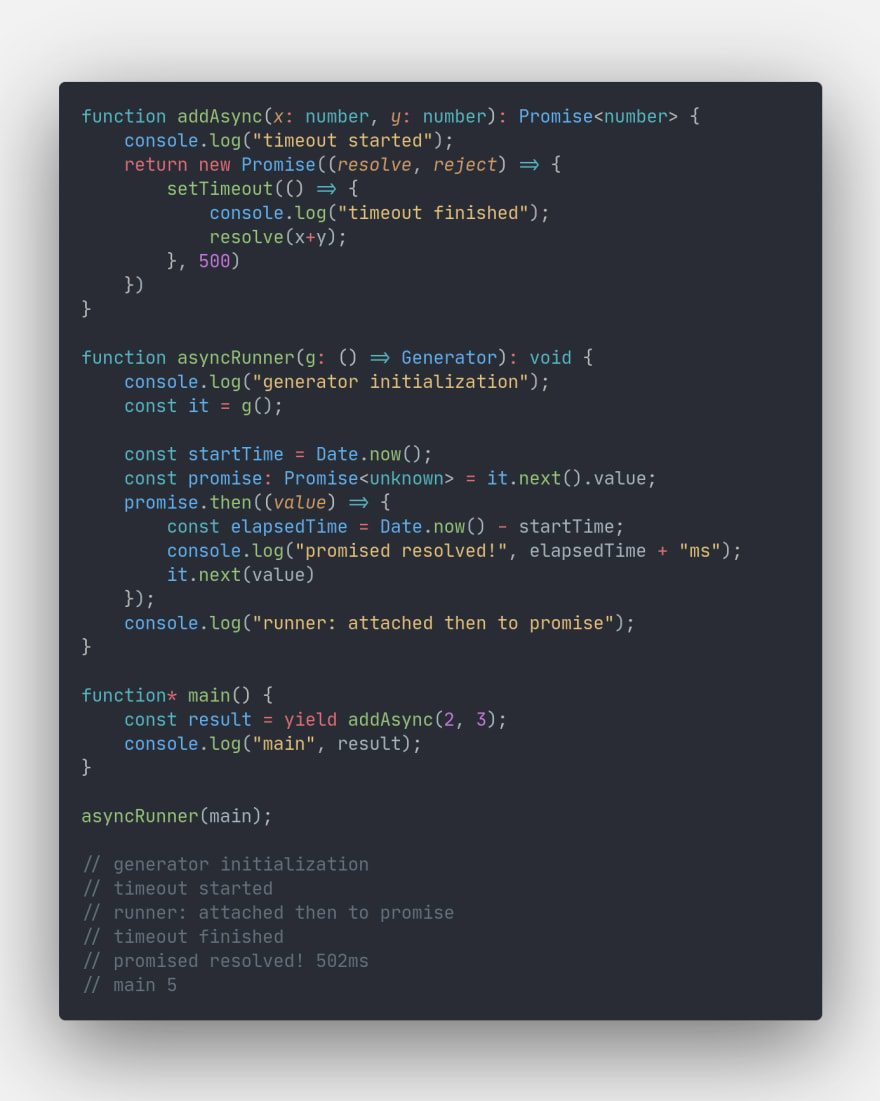 Let's walk through the execution.

At the moment, our runner expects to receive a Promise. However, by the spec, you can await any value, Promise or not. Fortunately, to solve this is very easy. 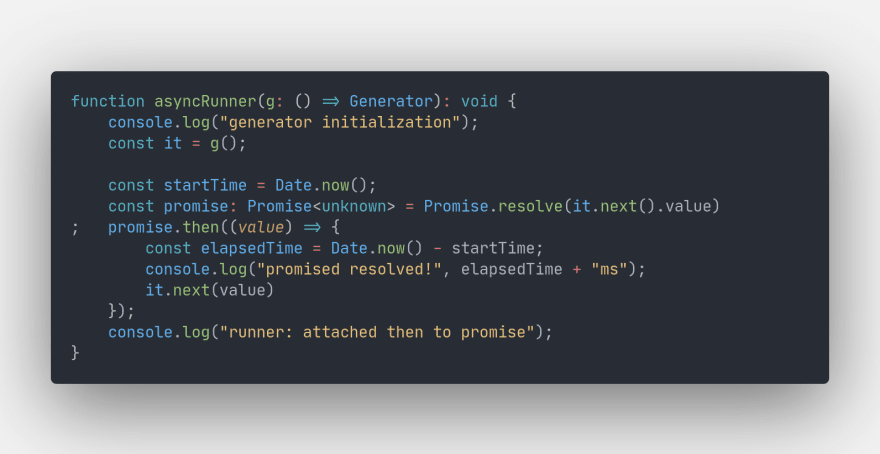 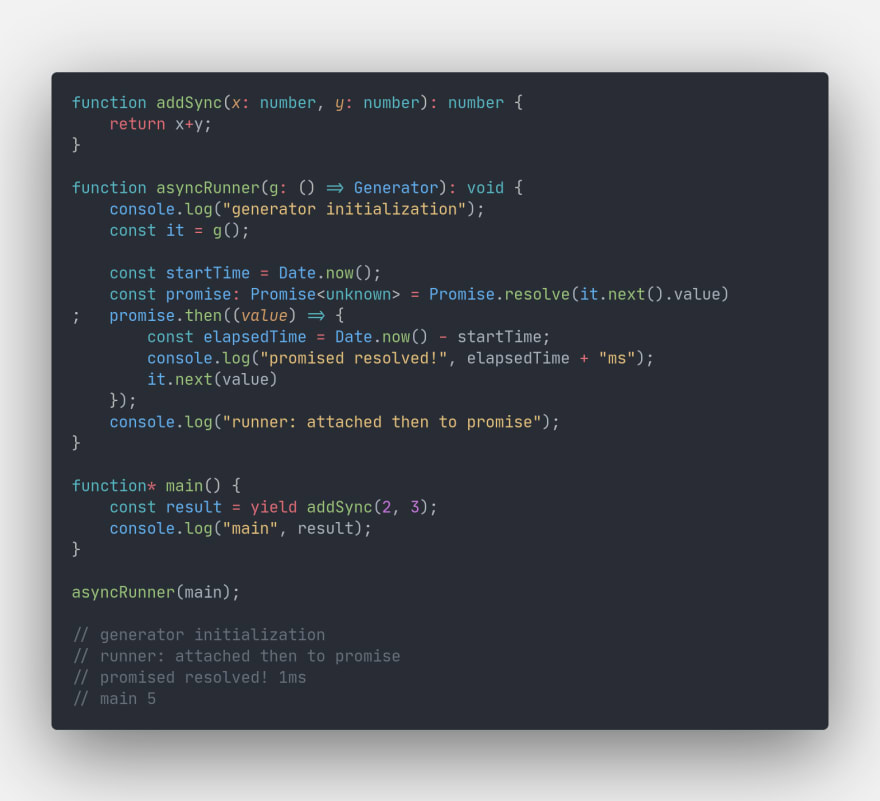 If we run our code with addAsync, we will get the same behavior as before!

Since we are using Promises, we can easily get any error/rejection that happens in our asynchronous operations. Whenever a promise rejection occurs, our runner should simply unwrap the rejection reason and give it to the generator to allow for handling. We can do this with the .throw method: 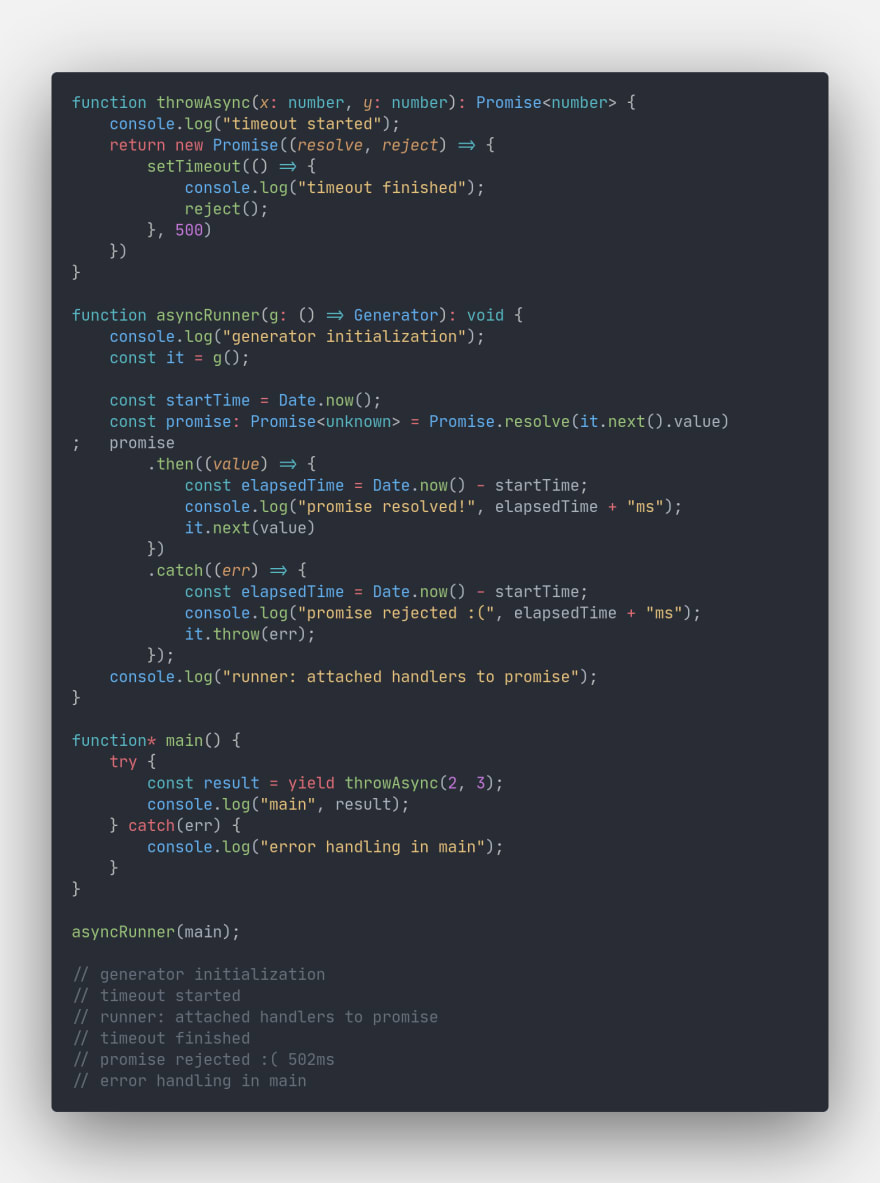 Now not only we add a .then, but also a .catch to the yielded Promise and if a rejection occurs, we throw the reason to main. Notice that this also handles the case where we are performing a synchronous operation and there is a normal throw. Since our runner sits below main in the execution stack, this error will first bubble to the yield in main and be handled there in the try...catch. If there was no try...catch, then it would have bubbled up to the runner and since our runner doesn't have any try...catch it would bubble up again, the same as in async/await.

We've come a long way. Right now our code is able to deal with one yield. Our code is already able to run multiple parallel asynchronous operations because we are using Promises, therefore Promise.all and other methods comes for free. Our runner, however isn't able to run multiple yield statements. Take the following generator: 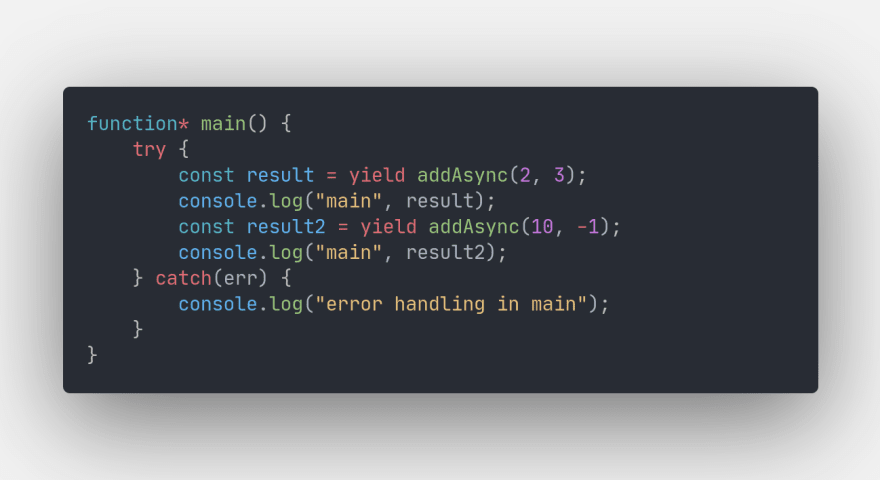 Our runner will deal with the first yield just fine, however it won't correctly give control back to main at all in the second yield, the timeout will finish and nothing will happen. We need to add some iteration capability to the runner so that we can correctly process multiple yield statements. Look at the following code: 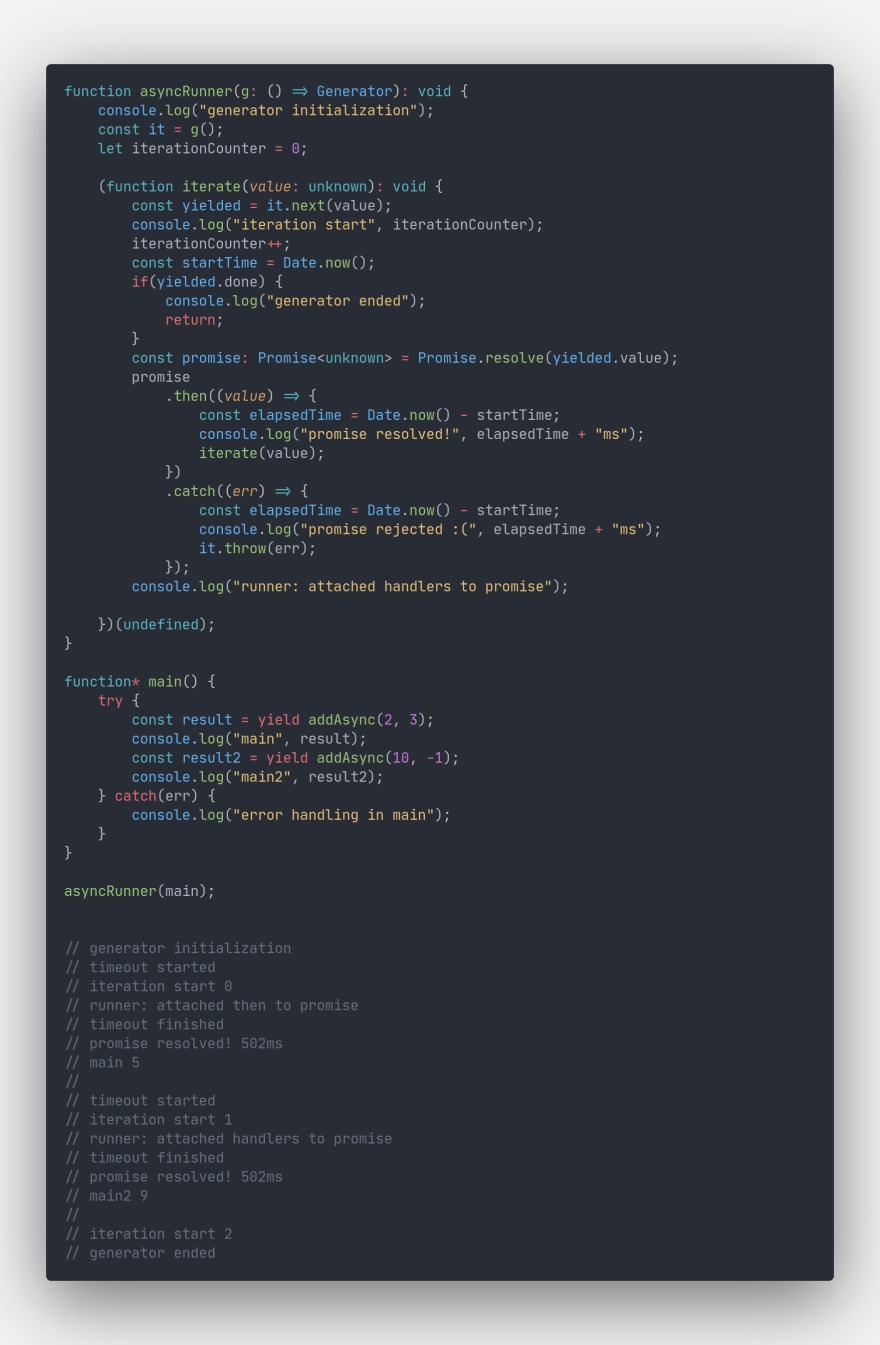 There is one problem however: if one of the promises rejects, then the cycle is broken and our runner doesn't run correctly. To fix this we need to add an error flag and call .next or .throw based on this flag: 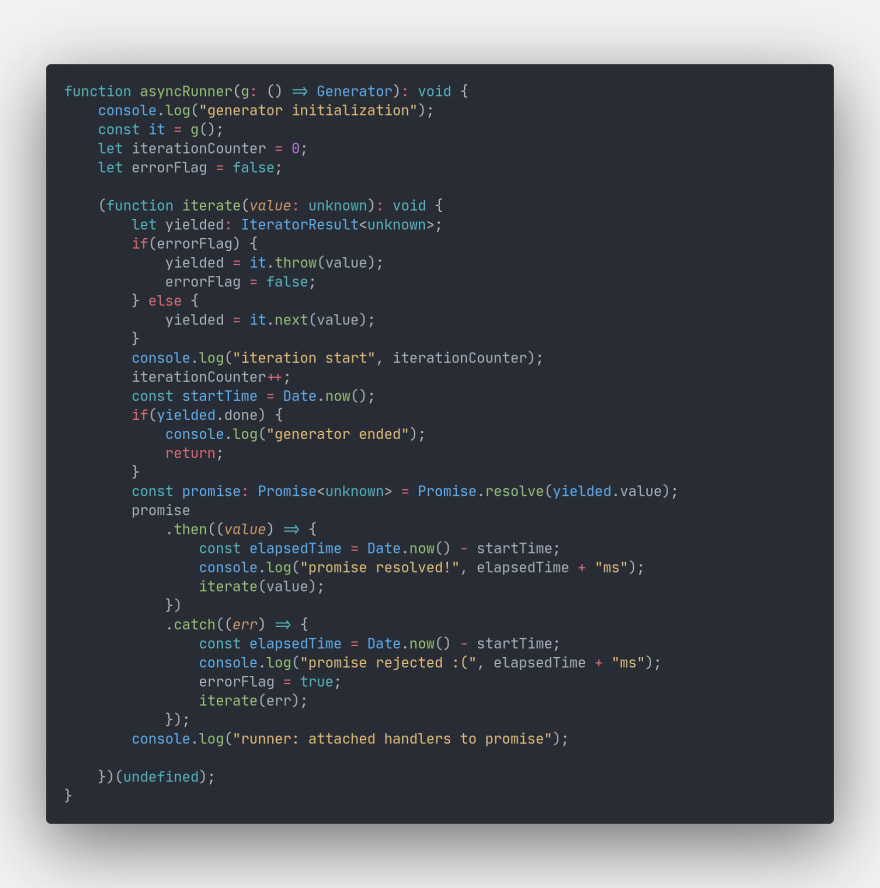 We've implemented something really close to async/await. If you look at the V8 blog you will notice that our program does essentially the same thing. I suggest reading the blog post above, there is a cool optimization that if you await promises, then the engine is so optimized that your code will run faster than just using promises with a .then.

With this post I finish writing about generators, at least for now. There is an interesting topic that I didn't touch that is coroutines. If you want to read about it, I recommended this post.

For my next post I think I will write about Symbol or the Myers diff algorithm (the default diff algorithm for git). If you have any doubts, sugestions or anything just comment below! Until next time :)

Once suspended, gsarciotto will not be able to comment or publish posts until their suspension is removed.

Once unsuspended, gsarciotto will be able to comment and publish posts again.

Once unpublished, all posts by gsarciotto will become hidden and only accessible to themselves.

If gsarciotto is not suspended, they can still re-publish their posts from their dashboard.

Once unpublished, this post will become invisible to the public and only accessible to Giovanni Sarciotto.