In Software Development keeping up to date with technology updates is crucial not only for developers who have to be always learning and renewing their set of skills but also for the projects they work on and have to be maintained.

When you start a project from the ground you normally set it up with the libraries' latest stable versions. Then time goes by, and the size of the project grows, new features are added, new libraries too, and the version of the libraries and packages usually remains the same and almost never gets updated. And yes, why would you update them if the project works perfectly with the current ones?

Here are some reasons why you should keep your dependencies updated:

When you keep the dependencies updated you are solving problems from older versions, improving the performance with new optimizations, and you are also able to use new features that other developers added to them. All of these contribute to increasing the maintainability of the code, and the overall project.

We all have worked on projects where the dependencies have never (or rarely) been updated.

Well, first you can run npm outdated to see the latest releases of the packages you are currently using.

You can then run npm update to update them (it will not update them to the major versions) but how do you know which ones will make the project break and which ones won't?

This is why I made this project, to learn about GitHub Actions and use it to have a safe way to automatically update the dependencies without making the project fail.

The short explanation of this tutorial is about adding the Renovate app to check for dependencies updates and then submit Pull Requests to update them, this way we will abstract ourselves on checking for updates, so we can focus on more important things.

The point of using GitHub Actions is to set up a workflow and trigger it with every Pull Request to check that the build and tests pass with the updated dependencies before adding them to the project.

Although this approach can be applied to any project we will use a React project made with Create React App as it will give us a basic project with everything ready to work on. By the way, if you do not have Node.js installed here is the link to do so.

Also, in this repository is the resulting project you will obtain after following all the steps below in case you want to have a look before starting.

If you use npm 5.1 or earlier, you can't use npx. Instead, install create-react-app globally:

Now we will proceed to define a GitHub Actions Workflow in our repository to automate the process.

GitHub Actions is a Github Feature that helps your software development workflows automating from simple tasks to custom end-to-end continuous integration (CI) and continuous deployment (CD) capabilities in your repository.

In our root folder, we will create a new folder and name it .github and inside of it a workflows one. This is how your project should look after these steps:

Here is where we will create and add our Workflows. Github Actions Workflows are the Continuous Integration automated processes we want to run in our project.

Workflows are composed of jobs that contain a set of steps and to explain them in a clearer way let's create our own workflow explaining it step by step.

In the .github/workflows directory, add a .yml or .yaml file and name it main.yml. I chose that name to keep things simple, but you can give it any other name like build-test.yml or continuous-integration-workflow.yml.

Here is how the workflow will look in the end in case you just want to copy it and add it directly before the explanation.

The first param of our workflow will be its name.

The second param is the trigger.

We can choose if the workflow is triggered by an event like a push or pull request to a specific branch, or we can even schedule a cron to automatically trigger it every defined amount of time!.

In our project we will want to trigger it when pushing to the master branch and when the Renovate app submits a Pull Request to update a dependence:

Next, we define the jobs.

In this example, there will only be one job which will be the one to build and test the project, and chose the virtual machine where the job will be run on.

Then it comes to the matrix where we will configure the combination of versions and systems we want to run out Workflow. In our case, we will run it on Node.js 10 and 12.

Finally, the Workflow's steps. The first one is the checkout action which is a standard action that you must include in your workflow when you need a copy of your repository to run the workflow.

Then you can run other actions and processes, in our app, we will use the setup-node action with the matrix we defined before. Then we will add steps to install the project, build it, and run the tests.

Now Create a GitHub Repository for the project, commit the local changes made, and push them to it.

Quick tip, If you want to create it faster go to repo.new or github.new. You can use gist.new for gists too!

Once you push your changes the Workflow will run, and you will be able to see how it went in the Actions tab from the GitHub Project. 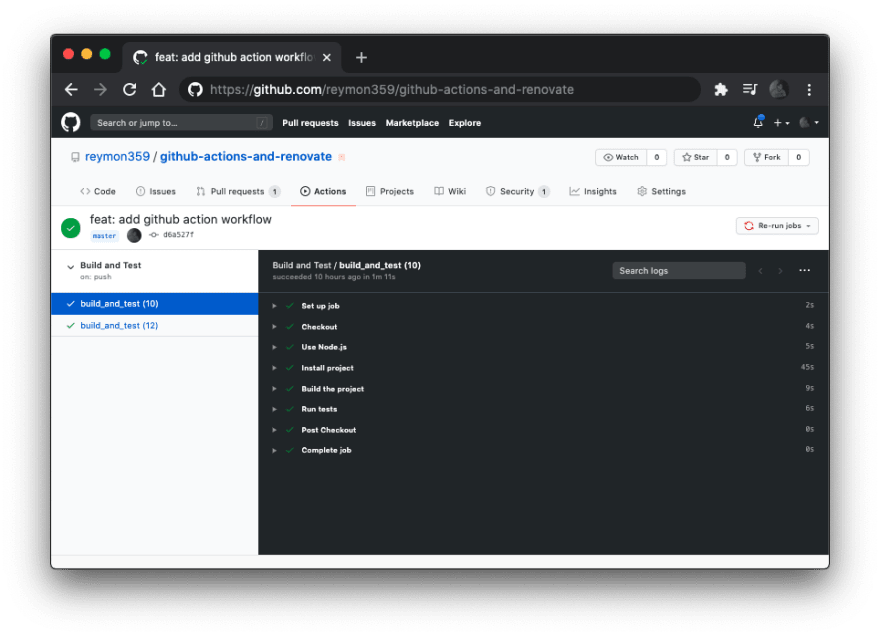 Renovate is a free, open-source, customizable app to automate the update of our dependencies in software projects by receiving pull requests. It is used by software companies like Google, Mozilla, or Uber and you can use it on GitHub, Gitlab, Bitbucket, Azure DevOps, and Gitea.

Going to the point what we will do is add a bot that will submit pull requests to our repository when there are updates in our project dependencies.

The cool thing, and the whole point of our project, is that we have previously defined in our workflow to run the tests with the pull requests so when renovate submits one we will automatically check if the updates proposed will break the project or not before merging them to the master branch.

To add Renovate to our project we have to install its app into the project's repository. Be careful when selecting the repository you want to add Renovate to and choose the one created before. If by mistake you want to reconfigure it you can do it in the Personal Settings' Applications tab from your account.

After some minutes we will have to accept and merge the onboarding Pull Request that we will receive.

Once we have it integrated we will configure it updating the renovate.json file on the project root. Remember to pull the changes after merging the Pull Request for it to appear.

We can use the default configuration where renovate will submit the pull requests whenever it finds out about updates and wait for us to merge them:

Or we can adapt it to the requirements of our project like the one used by Renovate itself. To avoid falling short and to learn a little more about the tool, we will use a configuration with some of its most useful features. If you want to learn more about its configuration here are the docs for it.

This will be our renovate.json file. Have a look at it and I will explain it after.

In the first part, we are telling renovate that our configuration will be an extension from the default one.

Then we have the packageRules. After some months using it I realized that going (from time to time) through the pull requests checking and accepting them if the tests passed was a major waste of time. This is why the automerge is set to true, so Renovate automatically merges the pull request if the workflow passed successfully.

To restrict Renovate's freedom a bit, we define that he only can perform the automerge when it is a minor or patch update. This way, if it is a major or another kind of update, we will be the ones to check whether that update should be added or not.

Here you can find more information about the update types available.

Lastly, we have the time schedule. If you work alone or in a team at certain hours it is nice to have the updates done at times when you are not working to avoid unnecessary distractions.

We select our timezone and add a custom schedule for it. You can find the valid timezone names here.

Anyway, if you do not care about the time the pull requests will be submitted, or the people that contribute to the code are in different timezones then you can remove this part.

Once we have updated the configuration we push the changes to GitHub to have the Renovate app adapted to the new configuration.

Now you finally have the project dependencies safely up-to-date without you having to check for them. Here is the resulting project after following all the steps mentioned above.

Remember that if you added the time schedule part you will not get the pull request merged automatically until it complies with that configuration.

Although there are other ways to keep the dependencies updated in an automated way if you use GitHub to host your code you should take advantage and make the most of its awesome free features.

If you are wondering what else you are able to do and automate with the GitHub apps and actions just have a look at its Marketplace.

In addition, you can have a look at a project I made where I am working on from time to time and on which I based myself for this tutorial. It is a bit more complex and has more features than the one from this tutorial.

I hope you enjoyed the tutorial and learned about GitHub Actions and its Apps. If you've got any questions, suggestions, or feedback in general, don't hesitate to reach out on any of the social networks from my site or by mail.

Here is a collection of links and resources which I think can be useful to improve and learn more about GitHub Actions and Apps.

Thank you for reading! You can read it too on my site along with others!

How to get back after failures in life?

Hooray! I Created my First Portfolio! 📂🎉