This project is an approach for a command-line application which is working with human language. The main benefits of using such a tool at first glance are:

When it comes to the technical part, it has two sub-projects. Both client and server sides of it are developed with Node.js. Here is a more detailed explanation of them:

In the client-side package, there are three commands which are sem-exec, sem-look, and sem-suggest. The first one is for running a command, the second one is to search for a command with human language and the last one is for suggesting new intent & command relations. The command coverage of this project will increase under the favor of these suggestions from users.
Now let’s dig into how these commands work. But first I want to give information about parameters in these commands. So we can understand easier the rest of this article.

The workflow of running command by sem-exec 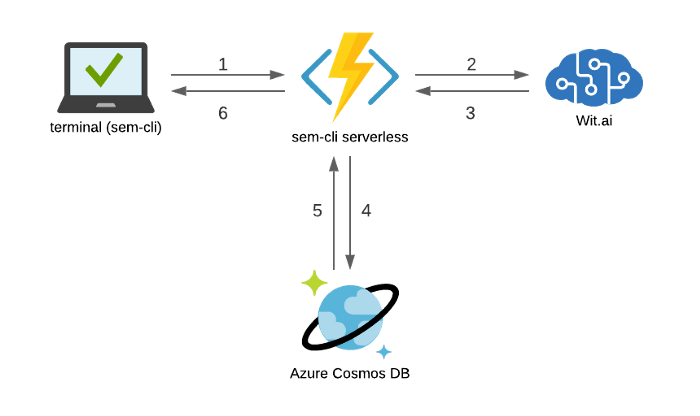 Let’s go through step by step according to numbers in the schema:

The workflow of running command by sem-look

This command has the same process as sem-exec.
However, it returns the corresponding command instead of executing it. For instance, if you run
sem-look compare files p="a.txt b.txt"
as command then it returns the following message:
Your command: "cmp a.txt b.txt" with danger level: "low" for your current operating system.
The current operating system is Mac OS for this example.

The logic of sem-suggest is much simpler 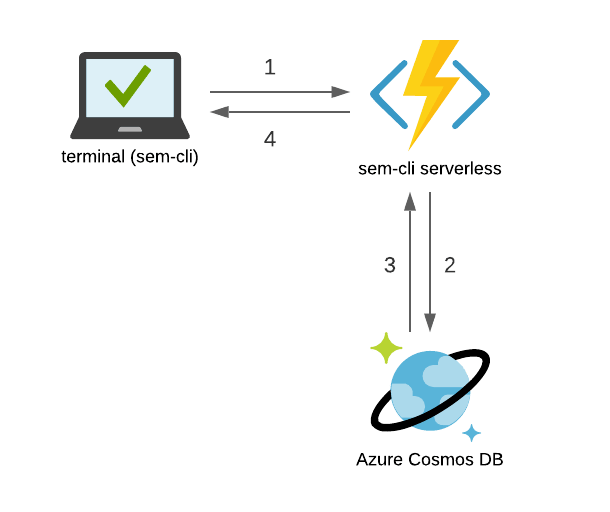 Finally, I want to mention the database. There are two containers with the same document structure.

By the way, you don’t need to write your operating system either for sem-look or sem-suggest, because it is detected by the client-side program and added to the requests as a parameter. So, please suggest a command which is working on your current operating system.

The project is working as expected. However, there is not enough data in the commands table. So, it is not covering a wide variety of command requests for now. For this reason, the enrichment of the commands list is the most important point in the current situation.

In my opinion, the main challenge in front of this project is the enrichment of the database with new commands. It will be very difficult if only several people add new commands. Suggestion functionality is added to give permission for proposing new commands to everyone. After checking these suggestions, beneficial ones will be added to the database. This evaluation process is done manually for now.
Additionally, distinguishing the parameter differences of commands in the semantic analysis will be another challenging point. Although we handle the finding correct command for human sentence requests when it comes to detecting differences in the manner of command parameters, training of AI is the crucial point. User messages and intents are matched on Wit.ai panel and it increases the analysis power of our tool. The more this tool is used, the more matching occurs and it increases the confirmation rate (which is between 0 and 1). So we can increase our threshold for matchings, it also helps us for detecting the differences in quite similar messages such as list files => ls and list all files => ls -a. Again this one is a very basic example, it is already detectable by our system :)

Here is my project about an NLP approach to command line usage. If you think it can be useful and you have some ideas, I will be happy to hear. Also, I am eager for collaboration.

Once suspended, halilcanozcelik will not be able to comment or publish posts until their suspension is removed.

Once unsuspended, halilcanozcelik will be able to comment and publish posts again.

Once unpublished, all posts by halilcanozcelik will become hidden and only accessible to themselves.

If halilcanozcelik is not suspended, they can still re-publish their posts from their dashboard.

Once unpublished, this post will become invisible to the public and only accessible to Halil Can Ozcelik.

Thanks for keeping DEV Community 👩‍💻👨‍💻 safe. Here is what you can do to flag halilcanozcelik:

Unflagging halilcanozcelik will restore default visibility to their posts.