Flask used to come to mind when data scientists want to spin up a python-based data science app, but there is a better option now. To create an interactive facade for a machine learning or visualization script, Streamlit is way faster, since it removed the need to write any front-end code.

Now we 'll go through step-by-step how to build a Streamlit app. I will also review some pros and cons of Streamlit.

Who is this for

Anyone who wants to put an interactive user interface or visible facade to the python scripts.

What can it do

Streamlit can be used to built machine learning/AI apps or display exploratory/analytical data visualizations or both at the same time.

To get started, first install the library

Then create a folder called streamlit_demo (or your preferred name) and add an app.py file to it.

In terminal cd into the folder and type

You will see these in the terminal.

Next we can start to add UI components, which are treated as variables in app.py, add this snippet to understand what that means.

Some of the common UI components include radio button, checkbox, selectbox, slider, and text input can be found in this documentation.

Now that we have a basic idea of how this works, we can start reading data and make a simple plot. The data and code for the following sections can be found in this gist.

Using Streamlit's built in charting function, we made our first plot in a few lines of code, and it's interactive and downloadable! 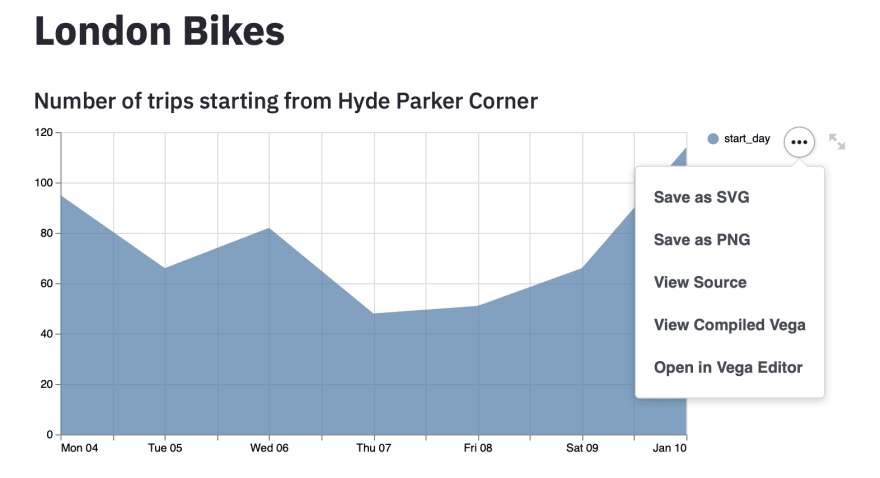 Going one step further, one can visualize the destinations of all the trip started from Hyde Park Corner. 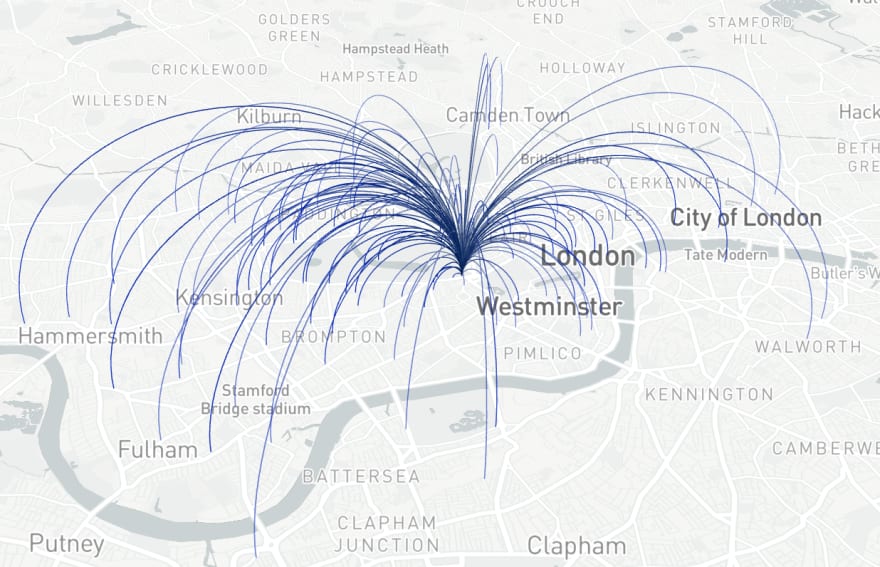 As one adds libraries and functions to the app, it becomes more important to organize the dependencies in one place. A nifty trick to make things easier is to create Makefile and requirements.txt. As an option, we can create these two files to make the workflow easier.

Requirements.txt list out the packages needed for the app to run

Makefile offers a recipe on how to properly set up the app. 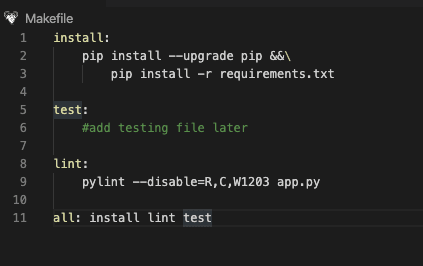 For example, when you run make install, it will automatically install all the dependencies.

Now that we had a glimpse of the functionalities of Streamlit, we can weigh it against other frameworks.

Streamlit has a long list of pros which I love:

And since it's python-based, one can run some ml algorithm in the same app and then plot charts on the output of algorithm, such as cluster or classification labels.

To view more UI chart components in action, this demo app is a good place to start where you can view both the chart and code side-by-side.

I shall start off by saying none of these cons is prohibitive. They are more of a good-to-have and are listed here to keep a balanced evaluation of the tool

In streamlit's case, one cannot customize the layout currently (but it's on their roadmap), which makes it not the most suitable choice for complex dashboards that require container-like layout. Streamlit layout mainly consists of a big vertical panel and a small side panel. One cannot really position 2 different charts side-by-side, or add custom elements in any specified locations. If you want to customize everything, you might have to use React.js/Vue.js.

Last but not least, one needs to be aware that it is focused on DS/ML use cases, thus will not offer the full suite of functionalities that Flask/Django have. This might not necessarily be a con, having a focus could a good thing. It simply means if one wants to build apps with other functionalities such as user authentication, newsletter subscription, or user-to-user interaction, then it's better to look elsewhere.

Streamlit is simple enough such that everyone can use it. It can be a superb option if you need a quick solution for an interactive data app, especially with both machine learning algorithm running in the background and interactive plots. Hopefully today we had some fun building data science apps. In a future post, we'll cover how to deploy it to the cloud and containerized it using Docker.

For more information, these resources might be useful.
awesome-streamlit
streamlit gallery

I tested every link preview meta tag on every social media and messaging app — so you don't have to! It was super boring!

Once suspended, hannahyan will not be able to comment or publish posts until their suspension is removed.

Once unsuspended, hannahyan will be able to comment and publish posts again.

Once unpublished, all posts by hannahyan will become hidden and only accessible to themselves.

If hannahyan is not suspended, they can still re-publish their posts from their dashboard.

Once unpublished, this post will become invisible to the public and only accessible to hannahyan.

Thanks for keeping DEV Community safe. Here is what you can do to flag hannahyan:

Unflagging hannahyan will restore default visibility to their posts.