This is the first part of blog post series where we will create blog cms using Hasura for GraphQL API, and serverless functions for logic and on the client we will write modern and robust code using ReasonML syntax. Let's get started.

First of all, before getting into actual code writing, let's discuss why ReasonML? Even though it's a topic for a stand-alone blog post, I will try to give you a brief overview. ReasonML gives us a fantastic type system powered by Ocaml, but as far as syntax goes, it looks pretty close to Javascript. It was invented by Jordan Walke, the guy who created React and is used in production at Facebook messenger. Recently various companies also adopted Reason and use it in production because of it's really cool paradigm: "If it compiles - it works."
This phrase is a very bold statement, but in fact, because Reason is basically a new syntax of OCaml language, it uses Hindley Milner type system so it can infer types in compile time.

What it means for us as developers?

It means that typically we don't write that many types, if at all, as we write in TypeScript for example and can trust the compiler to infer these types.

Speaking of compilation, Reason can be compiled to OCaml, which in turn can compile to various targets such as binary, ios, android etc, and also we can compile to human-readable JavaScript with the help of Bucklescript compiler. In fact that what we will do in our blog post.

What about npm and all these packages we are used to in JavaScript realm?

In fact, BuckleScript compiler gives us powerful Foreign function interface FFI that lets you use JavaScript packages, global variables, and even raw javascript in your Reason code. The only thing that you need to do is to accurately type them to get the benefits from the type system.

Btw if you want to learn more about ReasonML, I streamed 10h live coding Bootcamp on Youtube, that you can view on my channel

When using Reason for our frontend development, we will use ReasonReact. There are also some community bindings for VueJs, but mainly, when developing for web we will go with ReasonReact. If you've heard about Reason and ReasonReact in the past, recently ReasonReact got a huge update making it way easier to write, so the syntax of creating Reason components now is not only super slick but looks way better than in JavaScript, which was not the case in the past. Also, with the introduction of hooks, it's way easier to create ReasonReact components and manage your state.

In official ReasonReact docs, the advised way to create a new project is to start with bsb init command, but let's face it. You probably want to know how to move from JavaScript and Typescript. So in our example, we will start by creating our project with create-react-app.

We will start by running the following command:

It will create our basic React app in JavaScript, which we will now change into ReasonReact.

If it's the first time you set up ReasonML in your environment, it will be as simple as installing bs-platform.

I use reason-vscode extension for that. I also strongly advise using "editor.formatOnSave": true, vscode setting, because Reason has a tool called refmt which is basically built in Prettier for Reason, so your code will be properly formatted on save.

Adding ReasonML to your project

Now it's time to add ReasonML. We will install bs-platform and reason-react dependencies.

Let's also add compilation and watch scripts to our package.json

If you run these scripts, what will basically happen is all .re files in your project will be compiled to javascript alongside your .re files.

Let's write our first reason file, by changing index.js from

I import register and unregister methods from serviceWorker.js file so I can use Javascript in Reason.

to run our project, we need to run

so our Bucklescript will build files for the first time and watch for changes whenever new files are added.

Styling with ReasonML can be either typed due to bs-css which is based on emotion or untyped. For simplicity, we will use untyped. Let's delete index.css and App.css we have from 'create-react-app', create styles.css file and import two packages:

now in our styles.css file, we will import tailwind

Let's rename our App.css file to App.re, delete all its contents, and write simple ReasonReact component.

Nice right? With ReasonML, we don't need to import or export packages, and in fact, each file is a module, so if our file name is App.re, we can simply use component in a different file.

In ReasonReact, if you want to add text in component, you do it by using ReasonReact.string

Also, I prefer the following syntax:

You will see it quite a lot in this project. This syntax is reverse-application operator or pipe operator that will give you an ability to chain functions so f(x) is basically written as x |> f.

Now you might say, but wait a second that will be a tedious thing to do in ReasonReact. every string needs to be wrapped with ReasonReact.string. There are various approaches to that.

A common approach is to create utils.re file somewhere with something like

let ste = ReasonReact.string and it will shorten our code to

Through the project, I use ReasonReact.string with a pipe so the code will be more self-descriptive.

What we will be creating

So now when we have our ReasonReact app, it's time to see what we will be creating in this section:

This app will be a simple blog, which will use GraphQL API, auto-generated by Hasura, will use subscriptions and ReasonReact.

We will separate apps to components such as Header, PostsList, Post AddPostsForm and Modal.

Header will be used for top navigation bar as well as for rendering "Add New Post" button on the top right corner, and when clicking on it, it will open a Modal window with our AddPostsForm. Header will get openModal and isModalOpened props and will be just a presentational component.

We will also use javascript require to embed an SVG logo in the header.

For modal functionality in our App.re file, we will use useReducer React hook wrapped by Reason like so:

Notice that our useReducer uses pattern matching to pattern match on action variant. If we will, for example, forget Close action, the project won't compile and give us an error in the editor.

Both PostsList and Post will be just presentational components with dummy data.

Here we will use React setState hook to make our form controlled. That will be also pretty straightforward:

onChange event will look a bit different in Reason but that mostly because of it's type safe nature:

Now it's time to set GraphQL backend for our ReasonReact app. We will do that with Hasura.

In a nutshell, Hasura auto-generates GraphQL API on top of new or existing Postgres database. You can read more about Hasura in the following blog post blog post or follow Hasura on Youtube [channel](https://www.youtube.com/c/hasurahq.

We will head to hasura.io and click on Docker image to go to the doc section explaining how to set Hasura up on docker.

We will also install Hasura cli and run hasura init to create a folder with migrations for everything that we do in the console.

Once we have Hasura console running, let's set up our posts table: 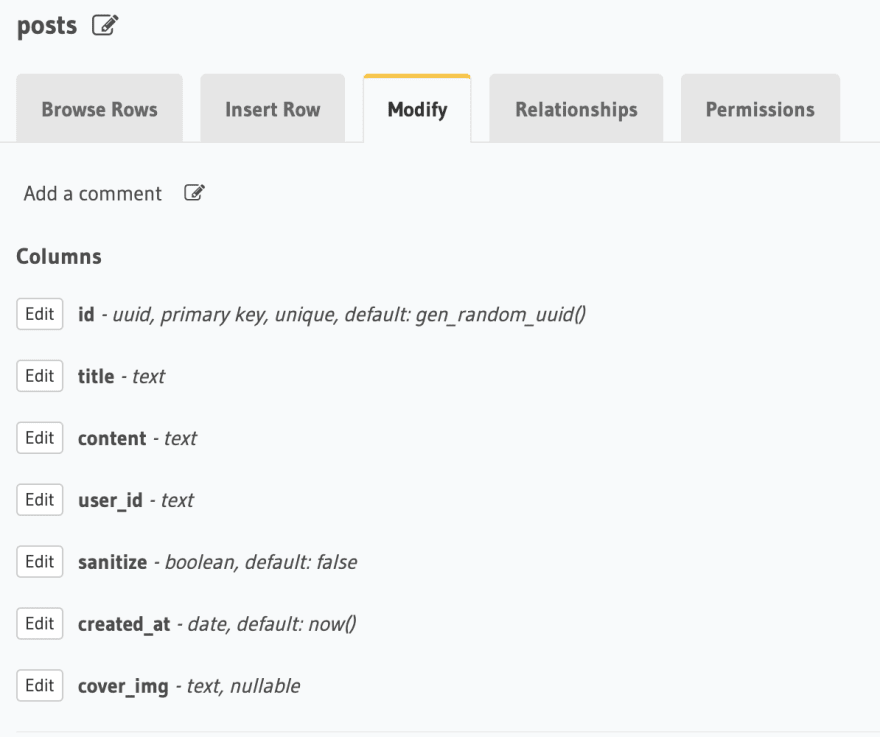 We will need to connect our posts and users by going back to posts table -> Modify and set a Foreign key to users table: 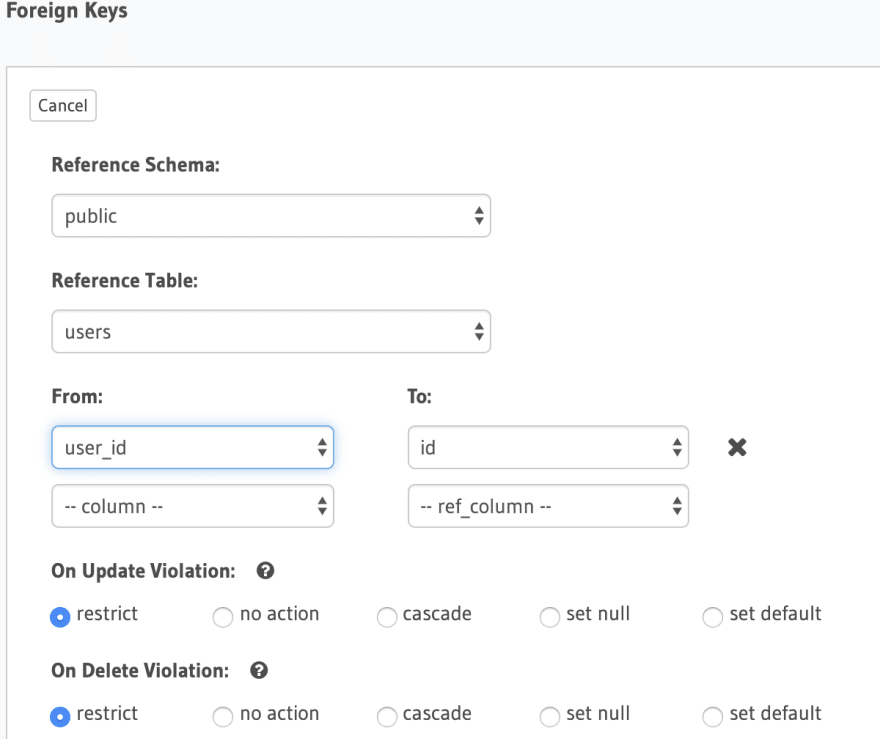 We will also need to set relationships between posts and users so user object will appear in auto-generated GraphQL API. 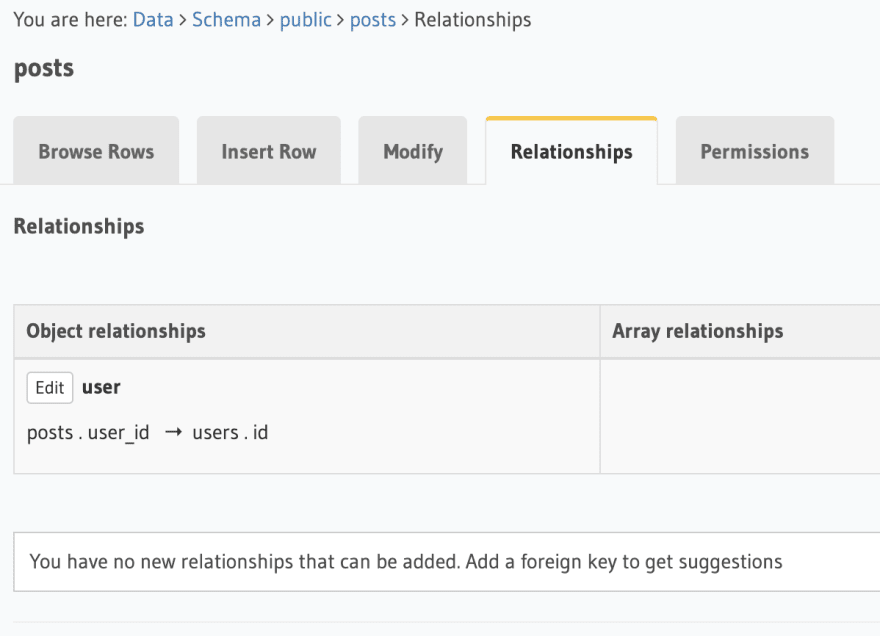 If we query our posts now will get all the data that we need for our client:

Adding GraphQL to our app

Let's install a bunch of dependencies to add GraphQL to our ReasonReact app and start getting blog posts in real-time.

When we work with Reason, we want to run an introspection query to our endpoint so we will get our graphql schema introspection data as json. It will be used to give us graphql queries completion and type checking in the editor later on, which is pretty cool and best experience ever.

We've added graphql_ppx ppx flag here - that will allow us to write GraphQL syntax in ReasonML later on.

Let's head to our PostsList.re component and add the same query we ran previously in Hasura graphiql:

Now we can use GetPostsQuery component with render prop to load our posts. But before that, I want to receive my GraphQL API result typed, so I want to convert it to Records.

It's as simple as adding types in PostTypes.re file

The final version of PostsList component will look as following:

To add mutation to our AddPostForm, we start in the same way as with queries:

The change will be in the render prop. We will use the following function to create variables object:

to execute mutation itself, we simply need to run

To add subscriptions we will need to make changes to our ApolloClient.re. Remember we don't need to import anything in Reason, so we simply start writing.

and create a link function that will use ApolloLinks.split to target WebSockets, when we will use subscriptions or httpLink if we will use queries and mutations. The final ApolloClient version will look like this:

Summary and what's next

In this blog post, we've created a real-time client and backend using Hasura, but we haven't talked about Serverless yet. Serverless business logic is something we will look into in the next blog post. Meanwhile, enjoy the read and start using ReasonML.

Build a To-Do Application with React and Firebase

Once unpublished, this post will become invisible to the public and only accessible to Vladimir Novick.