Most of the conference talks I’ve given this year have not only been online, but also pre-recorded. I went into the reasons for having pre-recorded talks previously, as well as the pros and cons of doing so, so this post will focus on how I’ve done it in my talks so far.

One thing to bear in mind is that this is how I’ve experienced pre-recording having been giving talks in person for many years.

It’s no secret that performing a talk into your computer is completely different from doing so in person. One part I’ve struggled with is that lack of eye-contact with the audience. Being able to see their reactions to parts of my talks, or even a chuckle at my silly jokes. Talking to a computer is not quite the same.

There’s still the fact that I’m talking to folks live, however! Knowing that folks are tuned in has, over time, help me stay convinced stuff is still happening as an active conversation. After trying out proper streaming recently, I’ve gotten a lot more comfortable talking to a chat. Like anything, it’s practise!

Doing so to a video recording on the other hand is a whole other feeling too, and likely a matter of practising as well. 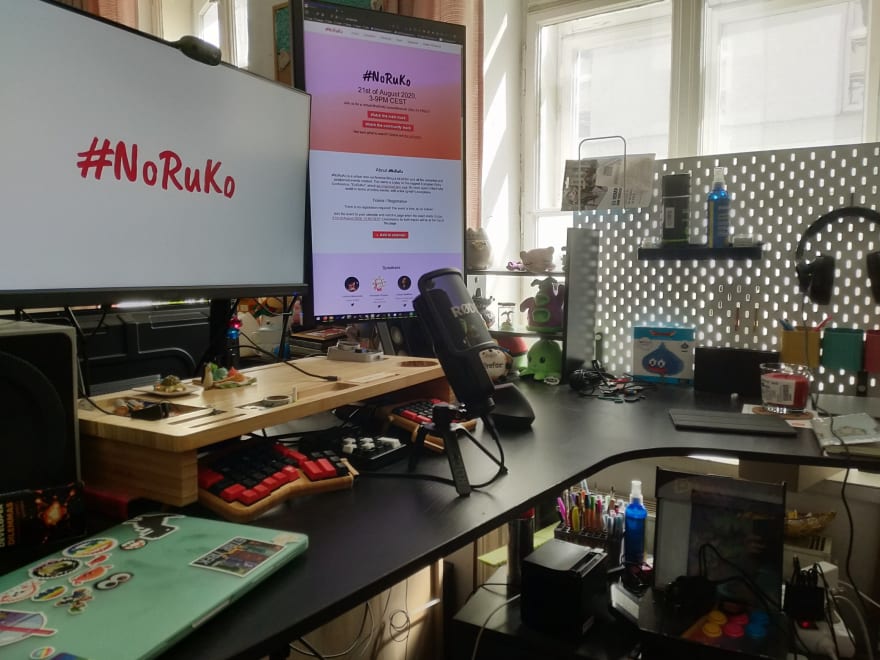 Precise models are listed in the following sections.

I’ve stuck mostly to recording on my Windows 10 desktop machine, where I’ve got a 720p-resolution Logitech Webcam. One or two conferences have asked that I provide HD 1080p resolution video, but since that includes slides and my face is normally only a part of the video feed, something with a higher resolution wasn’t necessary.

Most laptops (at least MacBooks, as far as I know) nowadays should have a 720p or close camera on them, which if you’ll be recording your slides as well as your face should be more than enough.

Below are some options I’ve considered for recording my speaking audio.

Given our experience with accepting pre-recorded talks, I feel that in order to deliver a decent-quality audio experience, the microphone built into a laptop can be disruptive due to factors like typing or the fans on the machine. Another issue is that the quality of the voice audio tends to depend on how close the speaker is to the microphone itself, so standing at arms’ length can really be a hindrance.

Headphones (headset, pods, buds, what have you)

I’ve found that talks delivered with a microphone close to the speaker goes a long way toward having good audio quality!

I ultimately went with a Rode NT-USB microphone, costing me about EUR 170.-

It did the trick as far as audio quality went, and the included pop filter made me a lot more comfortable!

It does have to be said that I’m using this microphone for podcasting as well, so it’s important to weigh this as a factor.

Getting plenty of balanced light on your face for your talk is pretty important for your visibility onscreen, so going for good natural light or investing in good lighting gear helps! In the past, I’ve tended more towards the former, but lately a friend of mine pointed me towards a more costly solution which is the Elgato Ring Light.

Your mileage may vary depending on what kind of light you get and what your preference is. Here’s how the difference looks for me without the light on the left and with it on the right. Both pictures were taken at night with the room’s light on: 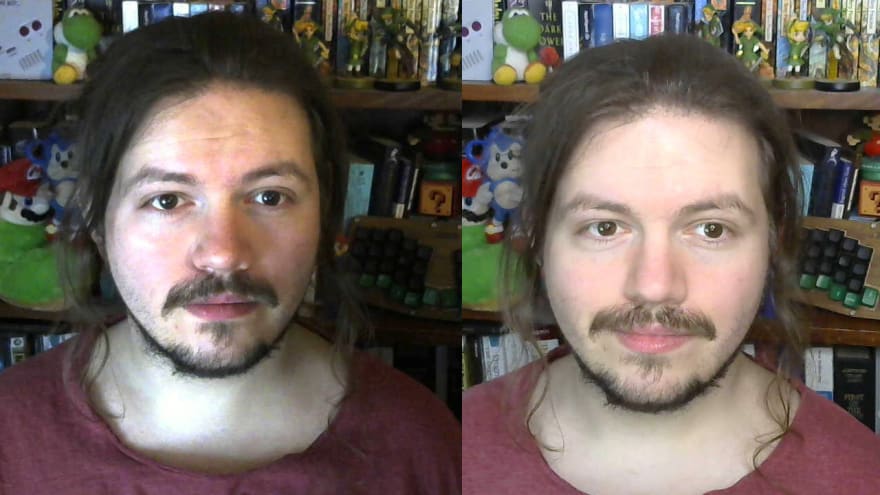 The difference might be subtle, but it makes me happy to have an even light on my face!

When I spoke at Future Sync online year, this was the first time I had to pre-record a talk! They very kindly provided a walkthrough for recording my talk using the open source software OBS. They recommended to use 3 sources:

Here it is in action: 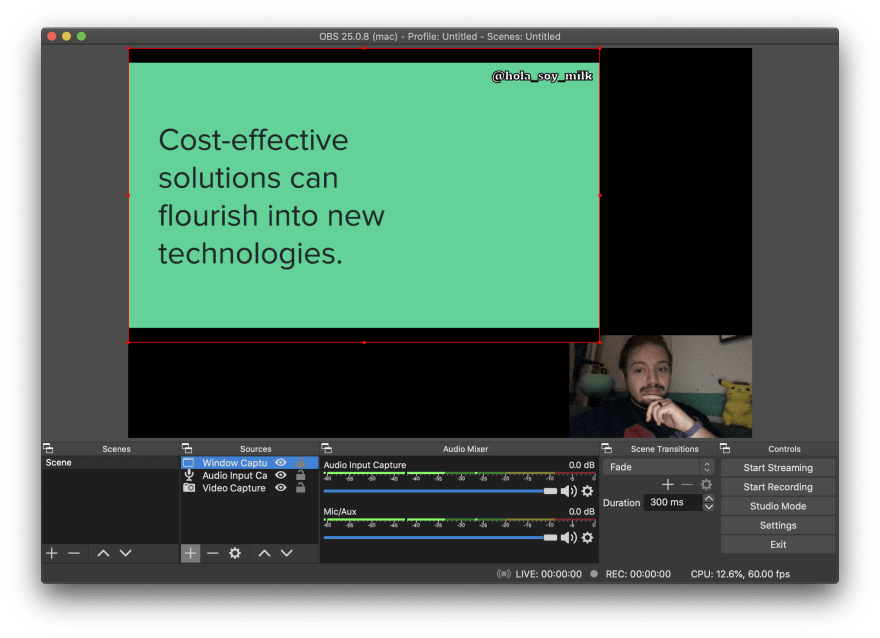 For more info getting into OBS, I can totally recommend their guides.

In my talks, I like to include captions by using the Google Slides’ built in functionality. Thank you to Chris for showing me this functionality!

It’s gonna happen. It happens to us all the time! When giving a talk, I’ll say the wrong thing and have to correct myself briefly, or go to the next slide too early, or jumble my words, or pause awkwardly for a second. The temptation to cut that out of the video is strong.

When I initially would deal with these slip-ups, I wasn’t well-experienced with dealing with video, and didn’t consider editing them. So what would I do if I considered a slip-up egregious enough to warrant intervening in the recoridng? Why, start over!

And what if, you may ask, the talk was long? I realise this can be extremely time-consuming. Nowadays, I’ve been using some open source video-editing software like OpenShot for editing our podcast episodes and have gotten comfortable with having a minor edit here and there to make the video experience a little smoother.

Over time, however, I’ve grown more comfortable with leaving these minor slip-ups in the talk recording. Like I said at the beginning of this section, these are natural in live conference talks, and can totally happen while recording! After all, you’re kinda recording “live”, in a way 😅.

The thing to definitely bear in mind is that our experiences pre-recording talks is unique to us.

I’ve seen folks try out some wonderful things, given that they have the opportunity to pre-record. I’ve seen folks give talks while hiking, or make fun use of editing!

I’ve been using OBS more for streaming lately, and getting quite comfortable with it. I could try using this to have more of an opportunity to have distinct cuts in my talks as well as different screen layouts! I don’t necessarily need to be in the corner, I can be next to my slides, or around them!

I’d love to hear what you’re trying when pre-recording talks, too!

7 Key Red Flags To Watch For In Software Job Listings

From Zero to DevOps Engineer - DevOps Roadmap for YOUR specific background 🔥

Once suspended, hola_soy_milk will not be able to comment or publish posts until their suspension is removed.

Once unsuspended, hola_soy_milk will be able to comment and publish posts again.

Once unpublished, all posts by hola_soy_milk will become hidden and only accessible to themselves.

If hola_soy_milk is not suspended, they can still re-publish their posts from their dashboard.

Once unpublished, this post will become invisible to the public and only accessible to Ramón Huidobro.

Thanks for keeping DEV Community 👩‍💻👨‍💻 safe. Here is what you can do to flag hola_soy_milk:

Unflagging hola_soy_milk will restore default visibility to their posts.