Operating System(OS) provides an interface to the user in order to communicate with the hardware.

Services like file maintenance, I/O, resource allocation, communication etc. These services are done with the help of system calls.

System calls provide an interface for the services provided by the OS. Few of the system calls are:

1.Simple structure - DOS has this type of structure. 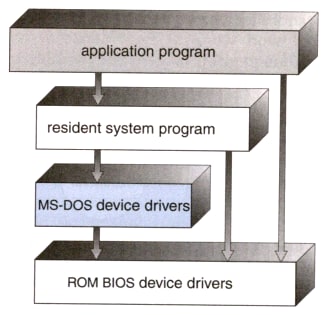 In DOS, user application may bypass the OS and write into ROM itself which is more prone to errors.

2.Layered approach - The OS services are modeled into layers with hardware as the lowest layer and user interface as the topmost layer. 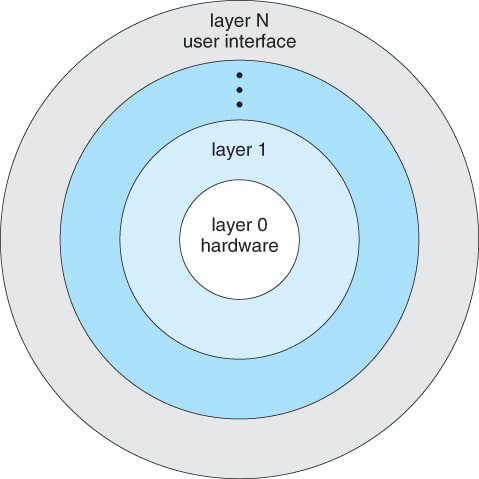 Here, one thing is to note that the top layer can communicate with lower layers only. So, layer planning has to be done properly. Also, debugging is more easy in this structure as debugging is done layer by layer and the exact location of problem can be ascertained.

3.Microkernel - Kernel is made smaller to make the OS fast to reboot and avoid conflicts. Microkernel is written on ROM so that it cant be modified. Only the most important system services and calls are embedded into the microkernel and the rest of the system calls are written and loaded onto the disk.

4.Modules - In the microkernel approach, there is drawback of system calls being present in the disk which is more volatile as user application are also present there and thus prone to be modified and susceptible to fatal error. To get around this, system calls are written onto disk and in form of modules. These modules when needed are loaded with the kernel which is written in EPROM(Erasable programmable ROM) instead of ROM so that it can be modified when necessary.

Whenever an error is encountered, OS writes error information into a log file which can be later used to debug. OS can also take a core dump - a capture of the memory of the process- and store into a file for later analysis. A failure in kernel is called crash. When crash occurs, error information is saved to a log file, and the memory state is saved to a crash dump.

Performance tuning also forms a part of debugging which is done through many tools such as Windows task manager, DTrace etc.

The process of starting a computer by loading the kernel is knows as booting the system. On most computer, a small piece of code known as the bootstrap loader locates the kernel, loads it into the memory, and starts its execution.
At this point the system is said to be running.

When Random Numbers Are Not Random

How to: Adaptive Cards and the MS Bot Framework