Core Web Vitals (CWV) are the metrics that Google considers to be the most important indicators of the quality of experience on the web. The process to identify and optimize CWV issues has typically been a reactive one. The decisions site owners make about which technologies to use or which metrics to look at are usually decided by trial and error, rather than empirical research. A site may be built or rebuilt using a new technology, only to discover that it creates UX issues in production.

This analysis is based on data from HTTP Archive. The HTTP Archive dataset is generated in a lab environment and contains detailed information on many characteristics of a website as well as performance data. Due to being lab-generated on a single set of hardware, HTTP Archive data will not be completely reflective of real usage and only allows for us to analyze LCP (largest contentful paint) and CLS (cumulative layout shift) as we do not have any user input for FID (first input delay). However, an advantage of being lab-generated is that all data is gathered on a single set of hardware with no bias in the types of websites that are loaded; thus, shields us from confounding due to user/device characteristics that we do not measure. Although we are not shielded from all confounding between website characteristics and web performance, this choice leaves us with far less confounding than a user-generated dataset where we often have no information on the user, and have only limited device information.

We conferred with domain experts and established a list of web characteristics of interest:

These characteristics represent the ways that web pages are built and experienced. Pages may be built using various technologies like content management systems (CMSs), JavaScript libraries and frameworks, etc. According to the Web Almanac, 40% of websites are built with a CMS. That makes it a useful category to inspect qualitatively to see if there are meaningful correlations between CMS and CWV. On the other hand, we use quantitative metrics that represent how users experience the page, including performance and page weight data.

To assess the correlation between the outcome and each predictor as well as their individual effects on the outcome, we derived a measure of correlation (% of higher >= split mean, %HSM) and a measure of effect size (mean split difference, MSD). Both measures are based on the types of splits the trained decision trees make based on the predictors. See appendix for more details.

Here, we present results on association and make note of specific characteristics that appear especially impactful on CWV.

When interpreting these results on association, an important thing to note is that positive and negative impact of a particular web characteristics should only be interpreted relative to that of other web characteristics and in the context of websites that employ an array of web technologies, various types of contents, and different third party requests. For instance, if a given web technology shows a strong positive impact, it should be interpreted as this technology appears to be good for performance relative to other technologies, instead of if we add this technology to a website, its web performance will improve.

LCP is modeled as the log of its numerical value, so higher values are worse.

Higher values of TTFB, bytes of JavaScript, CSS and images show the strongest positive correlation with LCP and most negative impact, though TTFB is not always actionable. 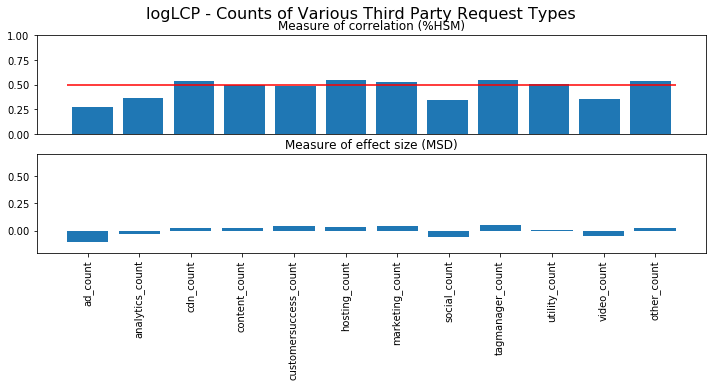 In general, third party requests do not show strong correlation or impact on LCP in the context of the other predictors we consider. This result could be due to most websites in HTTP Archive having a fair number of third party requests, so its effect could not be well ascertained.

The presence of most JavaScript frameworks show strong positive correlation with LCP and negative impact, except AMP. AngularJS, GSAP, MooTools, and RequireJS stand out the most. 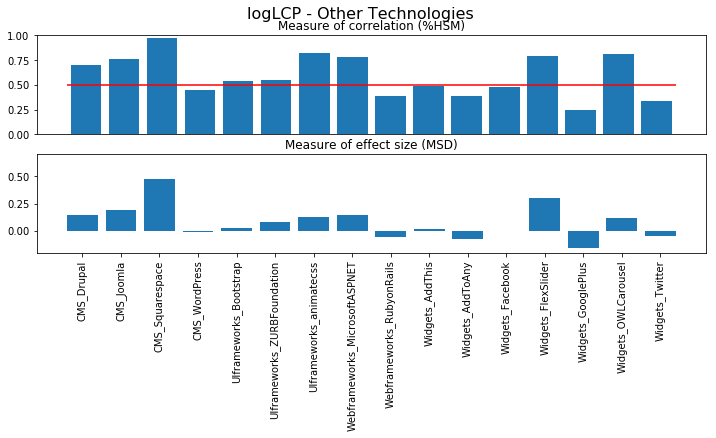 Among CMS, Joomla and Squarespace show strong positive correlation with LCP and negative impact. On the other hand, WordPress shows low correlation and impact.

CLS is modeled as a binary indicator of whether a given threshold is met. 1 indicates a website has CLS < 0.1, and 0 otherwise, so 1s are better than 0s.

Predictors with %HSM values close to 1 means higher values of a numerical/count characteristic or presence of a technology are strongly associated with meeting the CLS threshold, and vice versa for predictors with %HSM close to 0 (low %HSM is worse). 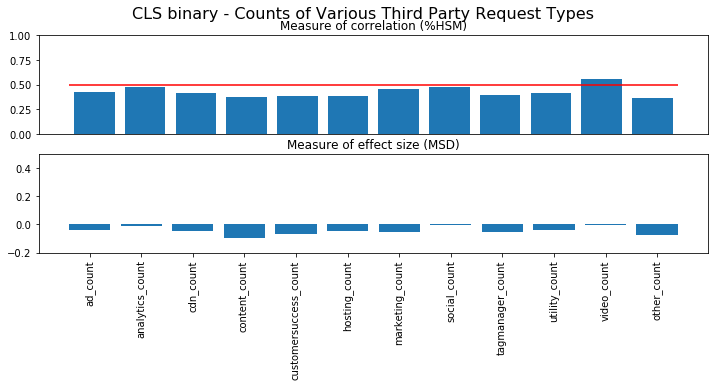 Just as LCP, third party requests seem to have low correlation and impact on CLS compliance.

The presence of several JavaScript frameworks show strong negative correlation with CLS compliance and negative impact, while AMP, GSAP, and React show low correlation and impact. AngularJS, Handlebars, and Vuejs appear to have the most negative impact.

JavaScript libraries appear less bad for CLS compliance than frameworks, though most still show a negative impact. FancyBox, Hammerjs, Modernizr, and Slick are the most notable. 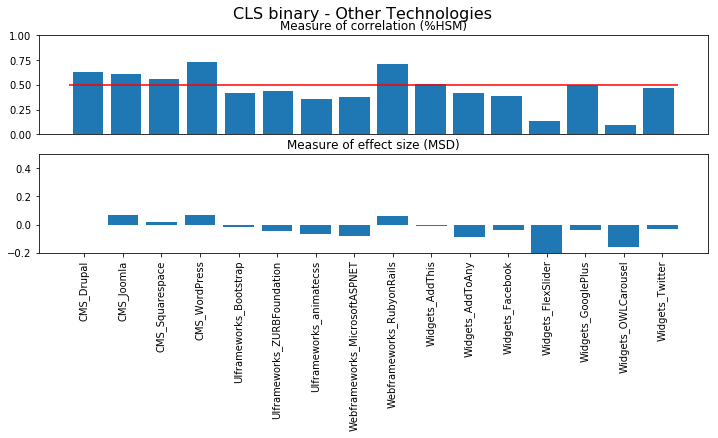 None of the CMSs have a notable negative impact, with WordPress showing a fairly positive correlation.

Among widgets, Flexslider and OWLCarousel both show a fairly negative impact on CLS compliance.

This analysis is a first step in an effort to more comprehensively understand the impact of web characteristics on CWV. While the results point out strongly associated characteristics, it would be impactful for the web community to further delve into the associations identified to ascertain which ones are truly causal and which ones are merely associative to inform web developers. In the meantime, the web characteristics with strong negative correlations/effects should be seen as a signal of things that require more attention and/or planning. Finally, it would be of interest to refresh these analyses in the future to see if the associations identified here still hold.

Random forest trains decision trees by making binary splits of the data. Each split is based on a particular predictor and are of the form X <= c and X > c, for a predictor X based on some purity criterion. Then, all data points with value for X <= c will be put in the corresponding branch, and likewise for data points with X > c. The data points can then be further split in each subsequent branch based on other predictors in the same way. The measures of correlation and effect size we use exploit these splits.

Once suspended, httparchive will not be able to comment or publish posts until their suspension is removed.

Once unsuspended, httparchive will be able to comment and publish posts again.

Once unpublished, all posts by httparchive will become hidden and only accessible to themselves.

If httparchive is not suspended, they can still re-publish their posts from their dashboard.

Once unpublished, this post will become invisible to the public and only accessible to Sixing Chen.

Thanks for keeping DEV Community 👩‍💻👨‍💻 safe. Here is what you can do to flag httparchive:

Unflagging httparchive will restore default visibility to their posts.