In summer 2019 I had the chance to get to know the Calliope mini.
Its inventors, the Berlin based Calliope gGmbH, states on their website:

"Calliope mini is a tiny controller designed to show you the fun in programming. Get creative and start coding!"

This introduction to the Calliope mini was initialized by the sozialo e.V., a non profit association started by the idealo internet GmbH, my employer. sozialo e.V. also equipped a mobile tech lab with Calliope minis, Laptops and everything needed to go off to a school or event or somewhere to do a workshop where anybody could start programming very fast
and with a lot of fun.

I have heard about the Calliope mini beforehand from Stephanie Hardt, a friend, who had some fun programming the Calliope mini with her children. We teamed up and contacted the school of our daughters. We proposed holding small workshops for pupils in 3rd and 4th grade.

In this series of articles I want to tell you how we went about it.

What is contained in the TechLab?

Currently the small TechLab consists of the following items

From the first workshops we held, we learned that the internet connection is a very critical element for holding the workshop. Two times is seemed that we were prepared well enough to use the schools WiFi. But it failed and we needed to fall back to Access Points from smartphones (on one occasion only a teachers Smartphone could provide a stable Access Point).

Now we bring our preconfigured Access Point so the risk is reduced. We still need to test and improve this setup, but it is gradually getting better. 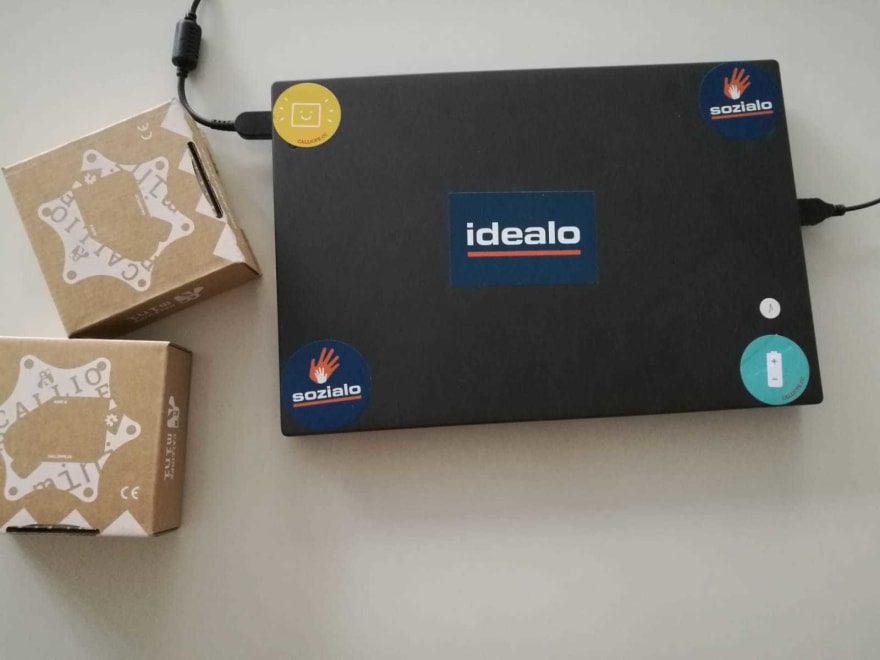 What is needed on site?

A room with tables and chairs for all participants is mandatory, also having at least on power connection for the extension cord we bring. Having a projector or large monitor helps a lot to show the children
how they work with the editor and how they deploy the code to the controller. I think it is possible to hold a workshop without these, however I always had a projector to use.

Having supporters in the school (or any other environment) is not even helpful but mandatory in my opinion. These people work with kids every day and know how to organize such an event. To me it felt very different
to work together with teachers and educators compared to my work colleagues that I see day to day. It's kind of like two worlds clashing together, so be prepared to a challenge. Being flexible on your part is definitely a good advice.

What is you audience?

In our workshops we specifically addressed 3rd and 4th graders. Having good reading and writing skill available is essential for working with the Calliope mini and the editor. We felt, that the recommendation of Calliope gGmbH was just right for us and expanding the age range would be too much of a challenge for us to handle the differences in knowledge.

Having two daughters myself, it was important to me to make the workshops accessible to girls. The teachers and educators managed to have an even split of girls and boys in all workshops and this was really great.

According to Calliope gGmbh girls (and boys) at that age are not framed into gender roles, especially when it comes to technical stuff that still (at least in Germany) is so much of a male field of activity.

We wanted to show that all that stuff on the computers or inside those smartphone is no magic and is "just there to consume". Instead, with not too much effort, everybody is able to use that hardware as a tool to use like a knife, pencil, guitar, hammer, ball, ... Take it, have fun and create something with it to use.

This concludes the first part on this series. In the next part
you will find out how we started into the workshop.

5 Basic linux commands with detailed explanation and their resemblance to windows.

5 best emulators download for windows and it's system requirements

Daniel Hübner
Software engineer, agile enthusiast, father and into music and drawing
The forgotten `with` statement — and why you shouldn't use it
#javascript #programming #productivity #codequality
October 14th, 2021: What did you learn this week?
#weeklylearn #discuss #weeklyretro
Why Django For Backend Than PHP(Laravel)
#beginners #python #programming