Before starting to talk about the subject matter, let us take a brief look at the compilation phases of a C program.
There are basically four phases:

In this article, we will focus on the static libraries and their role in the linking phase of a program. But, first of all, let us define a library.

What is a library and what is it good for?

A library is a collection of code routines (functions, classes, variables, and so on) that can be called upon when building our program, so instead of writing it ourselves, we can go and get it from something that has already been written and optimized. That is where the idea behind libraries comes from. We are reusing blocks of codes that have come from somewhere else.

Basically, we have two kinds of libraries:

The main reason for writing a library is to allow code reusability, thus save considerable development time.

What is a static library and how does it work?

A static library is a file containing a collection of object files (*.o) that are linked into the program during the linking phase of compilation and are not relevant during runtime.

As shown in the diagram above, when a program is compiled, the compiler generates an object file from a source file. After generating the object file, the compiler also invokes the Linker. The role of the linker, in this case, is to copy the code of the library to our object file.

Basically, static libraries are just a collection of object files that are merged by the linker with another object file to form a final executable.

Conventionally, they start with “lib” and end with “.a” or “.lib” (depending on your platform).

How to create static libraries?

To create a static library, we need to specify to the compiler, which is GCC in our case, that we want to compile all library codes (*.c) into object files (*.o) without linking. To do that we are going to use the command below.

Flags description:
-c: Compile and assemble, but do not link.
-Wall, -Werro and -Wextra: These aren’t necessary but they are recommended to generate better code.

Note that the "*.c" matches all files in the current working directory with the ".c" extension.

For example, let us take two c files, add.c, and mul.c which make respectively the addition and the multiplication of two integers, and a header file that contains the prototypes of these functions. The picture below shows the output generated after using the command.

After an archive is created or modified, there is a need to index it. This index is later used by the compiler to speed up symbol-lookup inside the library and to make sure that the order of the symbols in the library will not matter during compilation. There are two ways to create or update the index. The first one is, by using the command ranlib.

or by adding an extra flag (-s) to the ar command and it becomes like this:

The picture below shows the execution of these commands on our example. 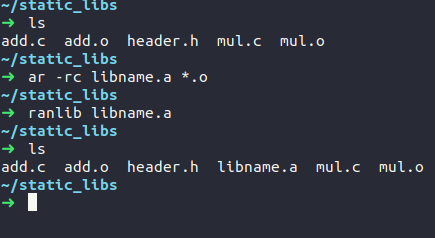 In order to list the names of the object files in our library, we can use the ar command with -t flag.

How to use them?

Now our static library "libname.a" is ready to be used. we can use it in a program. This is done by adding the library's name to the object file(s) given to the linker. First, let us create a C source file that uses the above created static library. 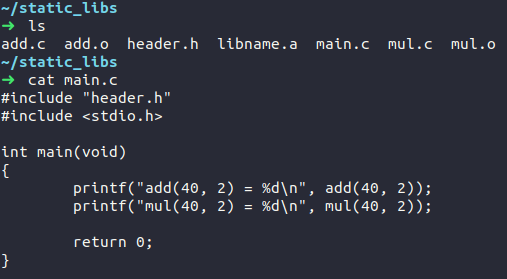 Now we can use the command below to create our final executable program:

This will create a program using the object file "main.o", and any symbols it requires from the "name" static library.

Flags description:
-L : Specifies the path to the given libraries ('.' referring to the current directory)
-l : Specifies the library name without the "lib" prefix and the ".a" suffix, because the linker attaches these parts back to the name of the library to create a name of a file to look for.

All we have to do now is to run our program.

how to send and receive data with flutter_libserialport package

Once suspended, iamkhalil42 will not be able to comment or publish posts until their suspension is removed.

Once unsuspended, iamkhalil42 will be able to comment and publish posts again.

Once unpublished, all posts by iamkhalil42 will become hidden and only accessible to themselves.

If iamkhalil42 is not suspended, they can still re-publish their posts from their dashboard.

Once unpublished, this post will become invisible to the public and only accessible to Khalil.

Thanks for keeping DEV Community 👩‍💻👨‍💻 safe. Here is what you can do to flag iamkhalil42:

Unflagging iamkhalil42 will restore default visibility to their posts.