In this article I explore:

The full statement can be found here at the Code Jam site.

You have just received the best gift ever: an Expogo stick. You can stand on it and use it to make increasingly large jumps.

A few facts from the problem statement:

Interestingly, the set of possible Expogo jumping lengths, has only one odd number, that is, 1.

That means that jumping with the Expogo any number of times, ends up with an odd coordinate and an even coordinate.

Immediately conclude that jumping to, for example, (R, R) or (R, -R) is impossible.

A quick way to see if a point P is made up of at both even and odd coordinates it to just add the components and check that the result is NOT even:

Let's explore the possibilities now. From any given point P = (X, Y), there's is a set of four points where the Expogo can land us, call this set Q.

We can always move the coordinates origin to P, and have:

As we can see, after the first jump, if we keep moving the origin to the landing place after every jump, then the set of Q points where can land next, is always an even distance away.

In step 1, when we moved the origin to (0, 1), P became (2, 2). We should have concluded immediately that such a move is not good, because in the scaled coordinate system, (1, 1) is impossible to reach.

In fact, any P where the X = Y, even, is already a bad option, no need to do the scale step.

With JavaScript, we can write moveExpogo which does this recursively.

Let's write the moveTowardsOdd function, where the magic happens.

Since moveTowardsOdd is called by moveExpogo only if the coordinate is odd, then we can conclude that the if branches cover all possible cases.

Remember, odd coordinates (X, Y) in this context are, those where X + Y = odd

The properties nextX and nextY represent P when the origin is moved to a new position.

These two functions solve the problem, for all test sets of Code Jam, even when the coordinates get pretty large.

These type of problems are challenging but also very fun! 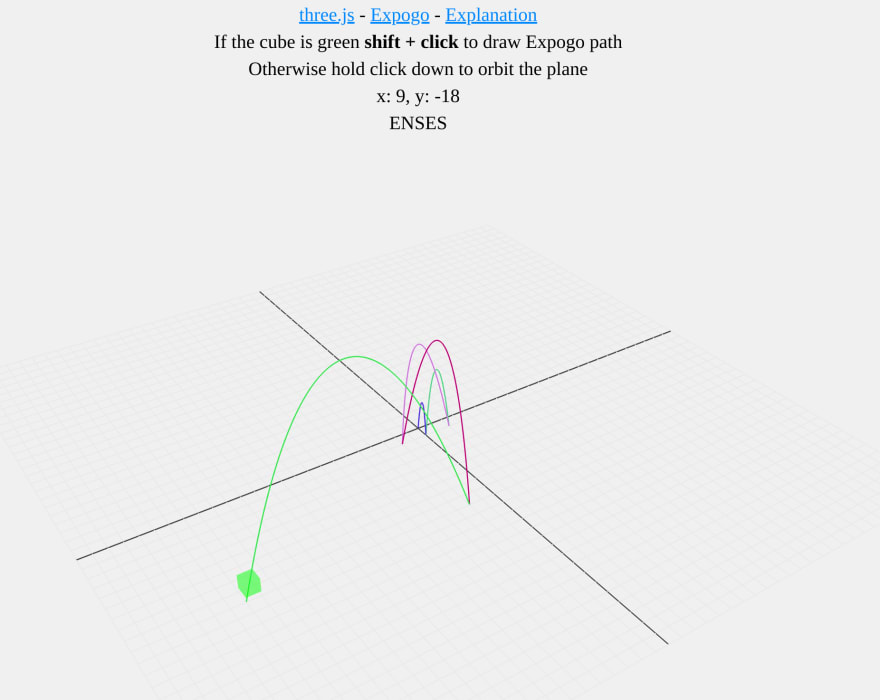 Since we've got a string containing the jumping directions at ever i-th step, we can derive the coordinates where the Expogo lands us to reach point P.

JavaScript's array indexing is zero based, so there's no need to subtract one from it when calculating the Expogo jumping distance

This REPL does just that! Now we can use any graphical tool to draw the path taken!

I'll try out three.js for this. In particular the Voxel example, which already makes use of plane and targets coordinates given by the mouse position.

When the user holds down the shift key and clicks on a point, the Expogo path is drawn. Additionally, the mouse is followed by a cube, which is colored red if its impossible for the Expogo to reach it, otherwise it is colored green.

I also try to increase browser support as much as possible by avoiding arrow functions, though this might be futile.

Have you ever tried to compete in Code Jam? I assure you it is very fun!