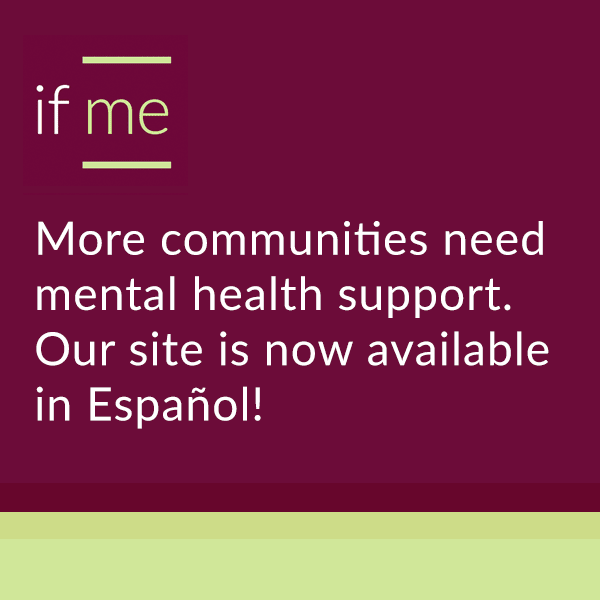 The idea for if me came from my experiences being a Vietnamese-Canadian struggling with mental illness and having conversations about it with my family. I was never taught the word for mental health in Viá»‡t. I only knew the word that was too often thrown at me, khÃ¹ng Ä‘iÃªn, which translates to crazy.

Mental health is a universal stigma, but every community faces its own internal stigma. Access to mental healthcare isn’t equitable. Factors like race, ethnicity, gender, class, income, education, and language affect this.

Communities that have to confront these intersections in order to survive struggle the most with access to mental health resources, which in turn, exacerbates poor mental health. The resources often don’t cater to their identities. People who are white, English speaking, part of the upper-middle class, and educated benefit the most from the mental health system in the Western world.

More marginalized communities are gathering together to talk about these issues, and most importantly, support one another. One organization that does this is Brown Sisters Speak, a non-profit based in Oakland that supports women of colour.

Last summer, I had the honour of meeting its founder, Myisha T. Hill, a Black mental health activist, writer, and single mother. The organization supports its community through storytelling, candid interviews, and neighbourhood support groups. Myisha introduced me to her co-organizer Zoraida E. Medrano, a Latina mental health activist and entrepreneur based in New York City.

We shared our experiences with struggling to talk about mental health in our respective communities. I learned from Zoraida that language is an intergenerational barrier to mental health support for Hispanic communities in the US.

Mental health education, awareness, and services are very important in the Latino community. I am originally from New York City and I have seen first hand how first and second generation of Latinos who arrive in the US deal with mental health issues. They come from other countries with preconceived notions and many passed down ideas on what they perceive to be “mental”. There are many people who get neglected because of the fear of having that deficiency discovered in public. This is taboo in the family, a sickness unspoken. I hope if-me.org helps to begin to unravel this story for our community. Let’s help them live lives without stigmas.
Zoraida E. Medrano

Our conversations inspired me to think about translating if me into different languages. English is always regarded as the default. But it’s simply not. Mandarin and Spanish are the top two most spoken languages in the world. To start conversations about mental health in marginalized communities, we need to speak their languages. 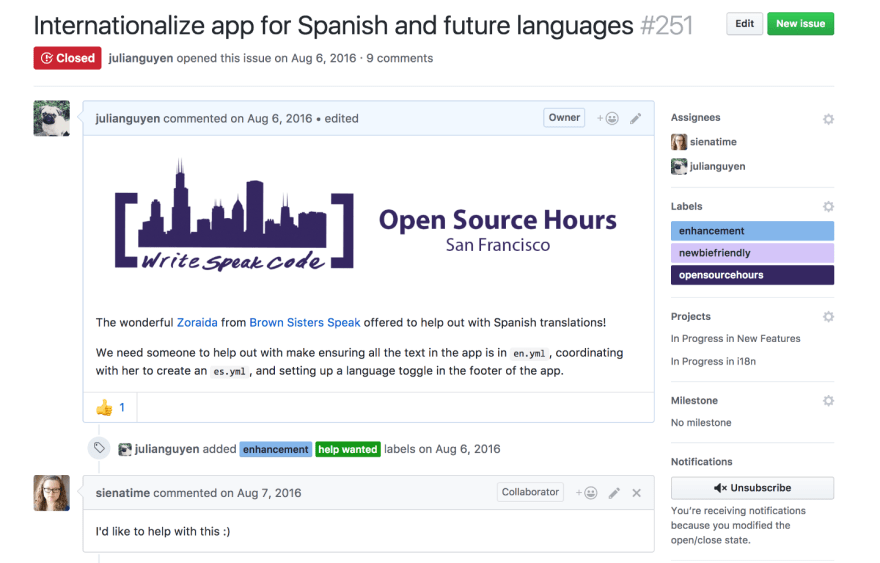 Like the many incredible people I have the privilege of crossing paths with, I met Bee Martinez on Twitter. She reached out after listening to my podcast interview with CodeNewbie, the most supportive community of programmers and people learning to code. 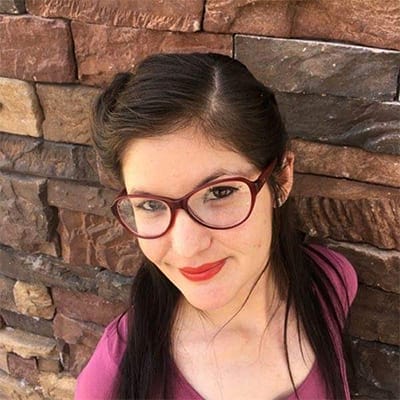 Bee is a multitalented Latinx writer, former teacher, and junior developer. She continued Tara Wilkins’ work to increase our social media presence. She went above and beyond and took the initiative to create and curate our Medium Publication

In if me, I found a safe space to combine everything I’ve ever been passionate about. I didn’t think much of it while I was translating. Now that I can see it online, I’m so thankful for having been able to give back to a project, a community, a cause I believe in, even when I felt I had nothing to give.
Bee Martinez, from My First Open Source Contribution (in Spanish too!)

Bee led translating the entire app to Spanish. This is no easy task. This ain’t no Google translate. She had to carefully analyze the existing English text and think about how the same intent could be communicated in Spanish. Bee got support from Zoraida E. Medrano and Patricia Arbona, a Hackbright Academy graduate and open source contributor.

Siena Aguayo is an incredibly talented senior software engineer and technical leader who I am lucky to work with at Indiegogo. She’s also a Hackbright Academy graduate. Siena organizes Fog City Ruby, a San Francisco meetup for people to give talks about programming. Did you know she speaks Japanese? 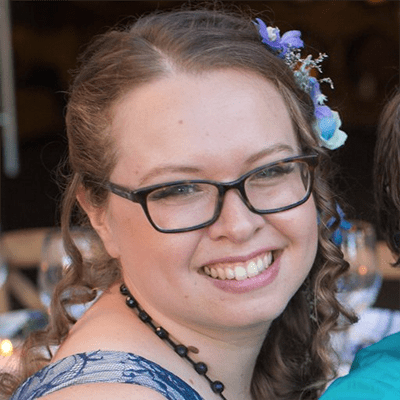 Siena has made our codebase a better place and helped to mentor junior developers contributing to the app. I’ve learned a lot about Ruby on Rails and refactoring best practices from her. She led the engineering side of the internationalization (i18n) project.

i18n is important to me because learning to speak a second language really shaped my perspective on how people experience the world. I want to do what I can to make it more accessible to others. My family are Spanish speakers so I thought I would have at least a passing familiarity with the things we would have to change on the site to accommodate another Latin-based language. This was my first experience contributing to open source and it seemed like an awesome way to get involved, and it was!
Siena Aguayo

The first task was to move all the English text into consolidated locale files. This was a #very# tedious task to say the least.

A lot of refactoring had to be done to better support i18n in Rails. Siena got rid of a gem we were using for time formatting and wrote her own implementation with i18n support. In order to support i18n in JavaScript, she made use of the i18n-js gem.

She worked with Bonnie Mattson to ensure the following best practices from Rails i18n tips by Hendrik Nyh were done:

Bonnie Mattson is an amazingly talented software engineer at Voxable, where she builds bots to help humans and machines communicate effectively. She loves designing and building systems from a developer experience perspective, and is passionate about social justice, aerial arts, and her dog! Bonnie quickly jumped into the i18n project and slayed. 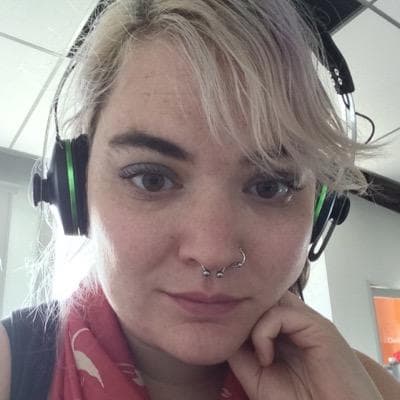 Internationalization is important to me because its a cornerstone of accessibility. A supportive community is a vital part of maintaining a healthy mind. Often times, it is easy to feel isolated, especially if you are geographically isolated. if me is an important project because it allows people to build supportive communities without the limitations of geography. Mental health is important to me because there is a lack of resources beyond traditional medication and therapy. Many people I love have suffered because of this lack. Contributing to if me is a small way I can use my skills as a software engineer to help alleviate other’s suffering.
Bonnie Mattson

Scheduling in open source software can be unpredictable. After three years of leading if me, I’ve learned that it’s important to encourage transparency in your contributor community. It’s okay to tell the maintainers that you can’t work on something or that you need time off. Maintainers need to be empathetic. Give thanks and recognition to your contributors! Contributing to open source is typically unpaid labour, which makes cultivating a healthy and inclusive contributor community even more vital.

I wrapped up the project by implementing the dropdown to toggle between languages, which believe it or not, isn’t straightforward when you have pages with and without a sign in session. You can use localstorage, cookies, url params, Rails session variables, or a database to save the language selection. We decided to use the database for pages requiring a sign in session and cookies for pages without a sign in session. The RailsGuides for Rails Internationalization was a handy resource.
Being a part of this project has given me a new found appreciation for software that offers internationalization. A lot of thoughtful work goes into increasing audiences in communities that are foreign to your own. It takes a team of people with diverse skillsets, not just developers.

We all have something to contribute to causes we deem worthy. Any worthy cause will value even the smallest contributions.
Bee Martinez, from My First Open Source Contribution (in Spanish too!)

Language is the most fundamental way we can increase access to mental health. Through language comes communication between people, which leads to communities being educated.

Let us know how your experience is going with our Spanish site. We’re seeking help with Brazilian Portuguese translations! If you want to see our app in your language, contact us at join.ifme@gmail.com.

Do you use GIT ? Let me see your code!

if me
if me is a community for mental health experiences
How to plan your dev career
#career #motivation #webdev #beginners
The New Way of the Developer?
#discuss #programming #webdev #codenewbie
Prometheus Made Easy
#monitoring #devops #opensource #go