Given its unique nature, a lot of people are curious to know if Rust is functional. 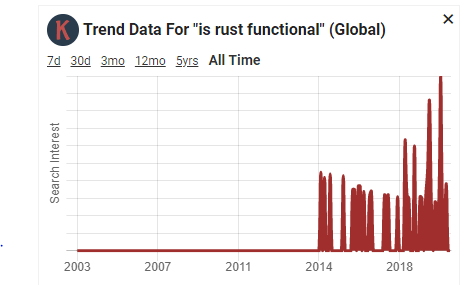 Is it? Let's find out.
For a programming language to be considered strictly functional it has to adhere to functional paradigm where functions are first class citizens and shared state, mutable data, and side-effects are not allowed. For that reason, a pure function will always return the same result for the same arguments. Rust supports Object Oriented Programming, which means it allows shared state. That disqualifies it from being a purely functional language. However, it borrows some functional concepts such as immutability.

All Rust variables are immutable ... by default.
There are a few ways to mutate them as shown below.

Above, the vector vec is declared mutable with the mut keyword, making it possible to change its contents.

Although it looks like s has been mutated, it hasn't. The let keyword declares another variable that happens to have the same name as existing one. This declaration overwrites the previous variable, effectively shadowing it.

So, you can still mutate things but it takes some effort. Its natural to think that this is an unnecessary complication but it has its merits that probably outweigh the cons. With default immutability the compiler guarantees that when a value is declared, it won't change; it can be accessed from various contexts and won't be updated. This not only makes code easier to read and write but also eliminates classes of bugs such as race condition and undefined behavior. These bugs rise from the following conditions:

Since we established that all values have exactly one owner in previous post, what are the ways multiple pointers can access the same data? The answer is borrowing; accessing data without necessarily taking ownership. Borrowing provides references which are similar to C++ pointers.

References are especially useful when passing values to functions. If all functions took ownership of arguments, we'd have to return arguments from the function so that they can be reused in the original scope. The example below illustrates how cumbersome it would be to use a function that calculate the length of a vector.

For illustration, Let's look at C++ and Rust program that essentially do the same thing: print the smallest number in array of integers. The C++ version below is totally valid, it compiles and runs without warning.

The function smallest_element looks completely harmless, it simply returns smallest element in the array, but it does so with side-effect of sorting it. Reusing arr blindly will result incorrect behavior which will be hard to debug especially if the function is imported from external library.

Let's try translating that to Rust. The snippet below is as close as we can get, you can interactively run it on Rust Playground.

No, but the error message seems straight forward. The vector sort function changes the vector, so requires it to be mutable. Let's see what happens after changing the signature of smallest_element() to take mutable reference instead.

Is the compiler satisfied?

Not yet, but the error message is actionable. Since smallest_element() now takes a mutable reference, we can't pass immutable reference. Making vec_ref_2 mutable, should easily fix it.

Makes sense that we can't have mutable reference to immutable data. The error message recommendations have been pretty spot on so far, making vec mutable should get us closer to compilation.

Isn't it nice that we have caught a potentially nasty bug at compile time? Isn't it awesome that we can rely on error messages for guidance? Turns out default immutability is useful afterall. It may take some time to get used to but I'm starting to like the Rusty way.

JavaScript Functions: Why They're Essential to Understand? | Easy Guide - Part2

Once suspended, imaculate3 will not be able to comment or publish posts until their suspension is removed.

Once unsuspended, imaculate3 will be able to comment and publish posts again.

Once unpublished, all posts by imaculate3 will become hidden and only accessible to themselves.

If imaculate3 is not suspended, they can still re-publish their posts from their dashboard.

Once unpublished, this post will become invisible to the public and only accessible to Imaculate.

Thanks for keeping DEV Community 👩‍💻👨‍💻 safe. Here is what you can do to flag imaculate3:

Unflagging imaculate3 will restore default visibility to their posts.