Don't panic, Docker containers and images are still alive. It's not that it will change everything.

Yes, it is true. Docker is now deprecated in Kubernetes.

Docker support in the kubelet is now deprecated and will be removed in a future release. The kubelet uses a module called "dockershim" which implements CRI support for Docker and it has seen maintenance issues in the Kubernetes community. We encourage you to evaluate moving to a container runtime that is a full-fledged implementation of CRI (v1alpha1 or v1 compliant) as they become available.

In short, what it means here is that Docker does not support Kubernetes Runtime API called CRI(Container Runtime Interface) and Kubernetes people have been using a bridge service called "dockershim". It converts Docker API and CRI, but it will no longer be provided from Kubernetes side within a few minor releases.

Kubernetes is an infra orchestration tool that groups up many different compute resources such as virtual/physical machines and make it look like a huge compute resource for your application to run and share with others. In this architecture, Docker, or a container runtime, is used only to run those applications in an actual host by being scheduled by Kubernetes control plane.

Look at the architecture diagram. You can see that each Kubernetes node talks to the control plane. kubelet on each node fetch metadata and it execs CRI to run create/delete containers on the node.

But why is Docker deprecated?

Again, Kubernetes only talks in CRI and talking to Docker requires a bridge service. So that's reason 1.

To explain the next reason, we have to see the Docker architecture a bit. Here's the diagram. 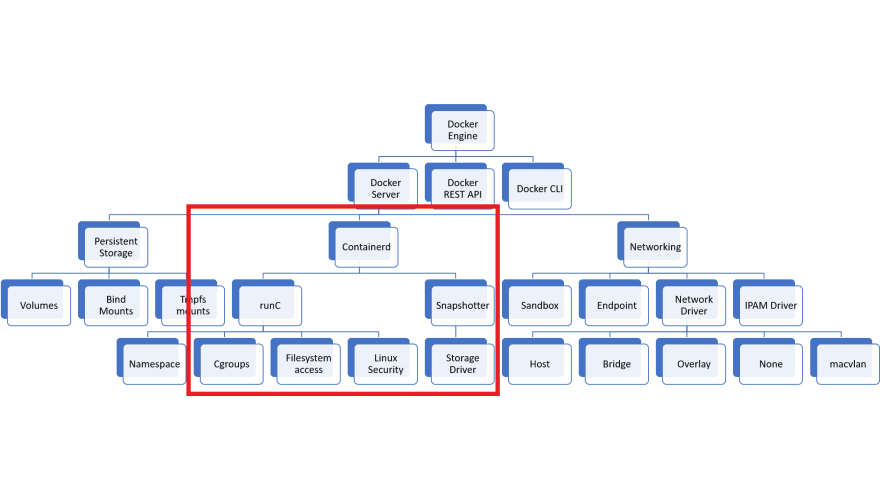 So yeah, Kubernetes actually needs inside of the red area. Docker Network and Volume are not used in Kubernetes.

Having more features while you never use, itself can be a security risk. The less features you have, the smaller the attack surface becomes.

So this is where you start considering alternatives. It's called CRI runtimes.

If you just want to migrate from Docker, this is the best option as containerd is actually used inside of Docker to do all the "runtime" jobs as you can see in the diagram above. They provides CRI and it's 100% what Docker provides, too.

containerd is 100% open source so you can see docs on GitHub and even contribute to it too.

CRI-O is a CRI runtime mainly developed by Red Hat folks. In fact, this runtime is used in Red Hat OpenShift now. Yes, they do not depend on Docker anymore.

Interestingly, RHEL 7 does not officially support Docker either. Instead, they provide Podman, Buildah and CRI-O for container environment.

CRI-O's strength in my opinion is its minimalism because it was created to be a "CRI" runtime. While containerd started as a part of Docker trying to be more open source, they are pure CRI runtime so CRI-O does not have anything that CRI does not require.

It can be more challenging to migrate from Docker to CRI-O because of that, it still provides what you needs to run applications on Kubernetes.

When we talk about Container Runtimes, we need to be careful which type of runtime you're talking about. We do have two types of runtimes; CRI runtimes and OCI runtimes.

As I described, CRI is an API that Kubernetes provides to talk to a container runtime in order to create/delete containerised applications.

They talk in gRPC via IPC as kubelet and the runtime runs on the same host, and a CRI runtime has responsibility for getting request from kubelet and execute OCI container runtime to run a container. Wait, what? Maybe I should explain with a diagram for this one. 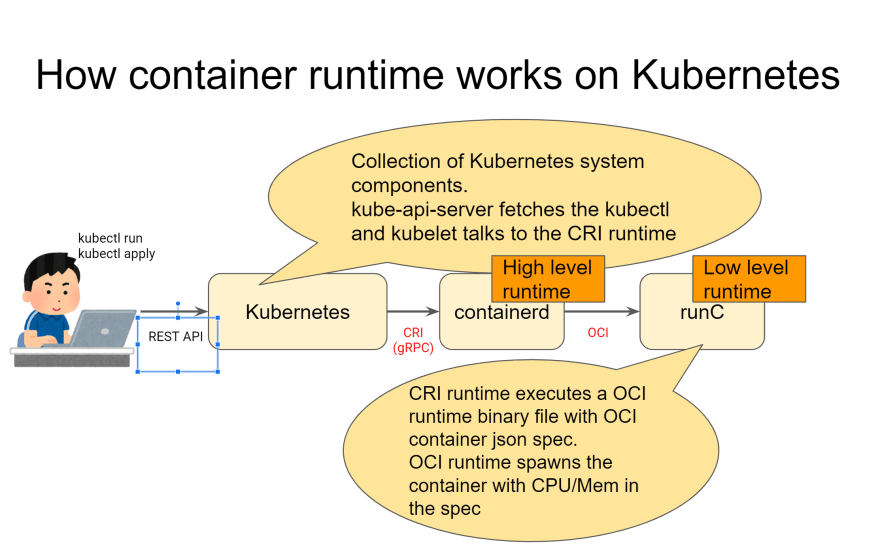 So what a CRI runtime does is the following

OCI runtimes are responsible for spawning a container using Linux kernel system calls such as cgroups and namespace. You might have heard about runc or gVisor. This is what they are. 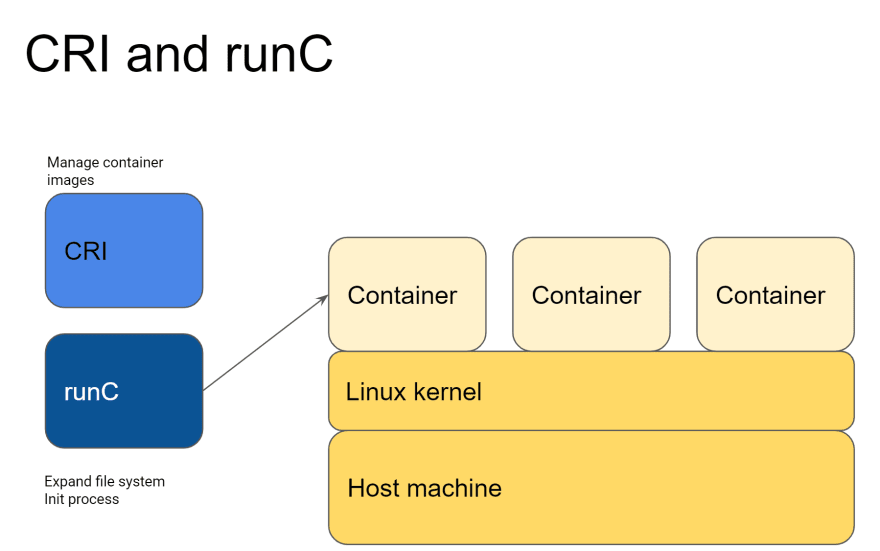 runC spawns containers after CRI executes the binary by calling Linux system calls. That indicates runC relies on the kernel that is running on your Linux machine. 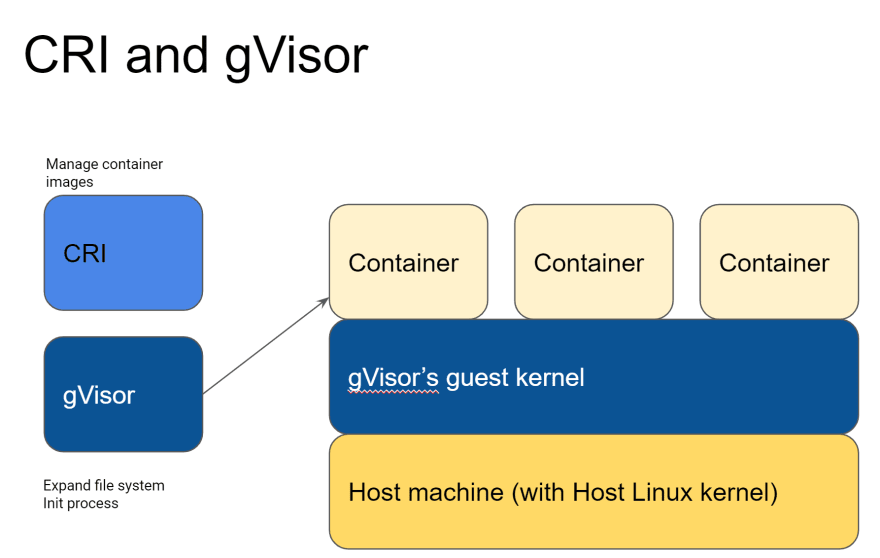 gVisor is an OCI runtime that were originally created by Google folks. It actually runs on their infrastructure to run their Cloud services such as Google Cloud Run, Google App Engine(2nd gen), and Google Cloud Functions(and even more!)

What's interesting here is that gVisor has a "guest kernel" layer which means a containerised applications cannot directly touch to the host kernel layer. Even if they think they do, they only touch the gVisor's guest kernel.

gVisor's security model is actually very interesting and worth reading the official doc.

Notable differences from runC is as follows.

1. Docker is surely deprecated but only in Kubernetes, so if you're a K8s admin, you should start thinking to adopt a CRI runtime such as containerd and CRI-O.

a. containerd is Docker compatible where the core components are the same.
b. CRI-O can be a strong option where you want more minimal functionality for Kubernetes

2. Know what the difference of CRI and OCI runtime responsibility and scope

Depending on your workload, runC might not be always the best option to use!

Kube-bench and Popeye: A Power Duo for AKS Security Compliance

Kohei Ota
Architect at Hewlett Packard Enterprise, CNCF Ambassador, Docker / Kubernetes
Kubernetes is not just about Tech. It has a huge community!
#kubernetes #cloudnative #community
Do you really need Docker or Kubernetes in your system?
#docker #kubernetes #devops #container

Once suspended, inductor will not be able to comment or publish posts until their suspension is removed.

Once unsuspended, inductor will be able to comment and publish posts again.

Once unpublished, all posts by inductor will become hidden and only accessible to themselves.

If inductor is not suspended, they can still re-publish their posts from their dashboard.

Once unpublished, this post will become invisible to the public and only accessible to Kohei Ota.

Thanks for keeping DEV Community 👩‍💻👨‍💻 safe. Here is what you can do to flag inductor:

Unflagging inductor will restore default visibility to their posts.