afterlockdown.me. We’ve collected post-quarantine aspirations from around the globe. What will you do after lockdown? 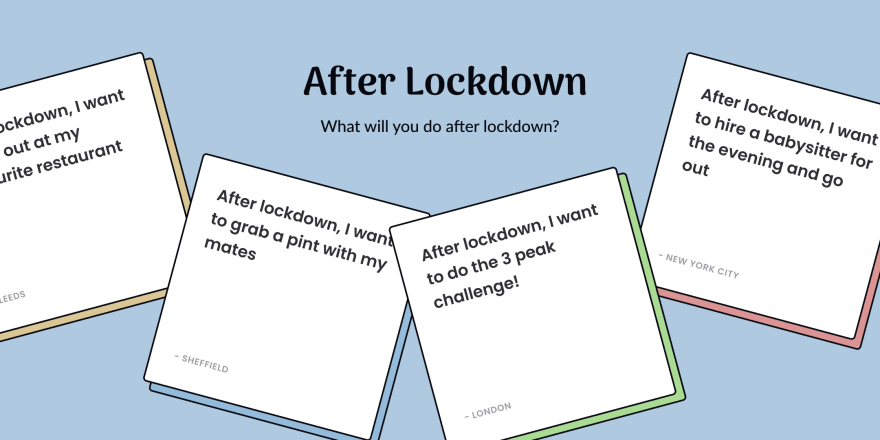 The COVID-19 pandemic has changed almost everything about our daily lives. The way we work, the way we commute and the way we communicate. It's difficult to look away from the daily updates and make blind hopeful stabs at when we'll be allowed out again.

Despite this people are still looking for a way to find a silver lining during the lockdown. Nature is creeping back into cities, and the lockdown may have inadvertently kick-started a shift in how we view the daily commute and 9-5 office hours. Previously overlooked professions are being recognised for the essential duties they perform daily.

One benefit that we've noticed is that we start to realise what we miss. What is important to us. What are the things that make us happy? We begin planning what we'd do after the quarantine and start to look upon things we'd previously taken for granted with a new sense of reverence.

That's when we decided we'd create a kind of memorial to these dreams. A place to look back on post-lockdown and remind ourselves of exactly what people found important when we were forced inside.

The goal was simple enough. A website where people from all over can catalogue their goals. A kind of interactive digital museum for the future.

This was simple enough to achieve. We used Laravel to spin up an application quickly and put together a simple interface.

The real discovery for us though actually laid outside the technology.

We decided that as we only had a small amount of downtime at the office we would have to fit the development into a 3-day gap in our schedules.

In the office, we're used to sitting next to each other. Able to quickly get an opinion on a design or approach to a technical problem.

We recreated this in Google Meet. Scheduling a meeting and then leaving the room open for the day. The window permanently in the corner. It was the most office like environment we could come up with, and it worked surprisingly well.

At 12 a founder would join us for a brief update on how the project was going. But we would remain in the chat once the stand up was done.

We were once again able to brainstorm, and talk fluently where previously we were chatting in Slack, scheduling a call, closing it... repeat. We could discuss things as and when needed. And even get across those "aha" moments before they slipped our mind.

We also used Figma to work collaboratively on the design. Again, being able to discuss things immediately was a great benefit.

Working this way isn't the perfect fit for every project. For such a small side-project it was surprisingly effective. It was the closest semblance to our previous environment we could create.

Things aren't normal right now, and may not be for a while longer. But the constants that mattered before still matter. We're thankful that our workplace still understands the importance of allowing their developers to experiment in their own way. Where some agencies would have placed their employees on an unimportant task during downtime we were allowed to work on what we thought would be fun.

We also found that recreating the office virtually is actually quite productive (though obviously not a fit for every person and every project).

In the end, we surprisingly think that after lockdown we want to get back into the office.

We're Inktrap, an independent design studio based in London with clients ranging from ambitious startups to multinational businesses. We do UX/UI design and front-end development.
code of conduct - report abuse