In this article we’ll take a look at a fictitious piece of technical debt from inception to resolution.

My goal is to get you thinking about technical debt from a few different angles.

Our scenario opens with a company working hard to meet a deadline. There’s a huge financial upside to being feature complete by a demo at a major trade show.

It’s the last sprint before the demo. Things are going well, but the schedule is tight. In stand up, Kayla describes a feature she’s working on and how the degree of complexity is much higher than expected.

Kalya estimates that it will take 8 hours to do the feature properly, but there isn’t enough time left in the sprint. Dwayne offers a suggestion that would let the team meet the critical need in only 3 hours.

After some deliberation, the team decides to go with the short term workaround and creates a backlog item to clean up the feature properly after the deadline.

The team completes the feature as planned, the deadline is met, and the company profits from the team’s decision.

At this point the team has gained 5 hours of productivity (principal on the loan) from taking on the debt.

After the demo occurred, the business made a number of key sales and commitments that were huge achievements for the company. It’s an exciting time for the company and the team is happy to see their work rewarded.

Because of several bugs discovered during the demo as well as some new features needed, the technical debt ticket didn’t make it into the next sprint.

Additionally, during the sprint, Dwayne discovers that due to the workarounds the team took, he now needs to spend an extra hour of development while implementing a new feature. This can be thought of as interest in our financial metaphor.

Let’s pause here and look at this scenario on a waterfall chart. This is a financial chart looking to chart financial transactions over time. It seems only appropriate to represent a financial metaphor such as technical debt using a financial chart, after all. 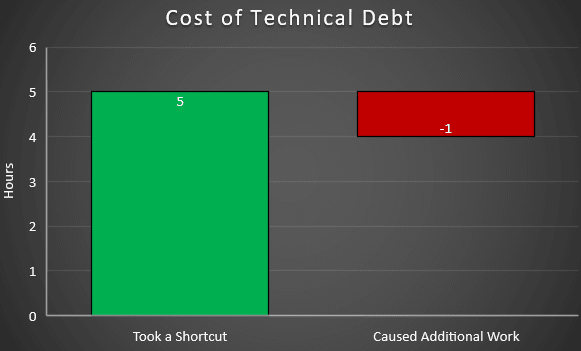 The next sprint, the team includes the task of paying down the technical debt.

However, before Kayla can begin work on it, a pair of urgent bugs come in that need to be added to the sprint. These bugs turn out to be due to the workaround. Each bug takes 3 hours to replicate, write a test for, fix, test, and patch into production.

Additionally, Kayla ran out of time to pay down the debt so it slips to a future sprint.

As a result, our waterfall chart now looks like this: 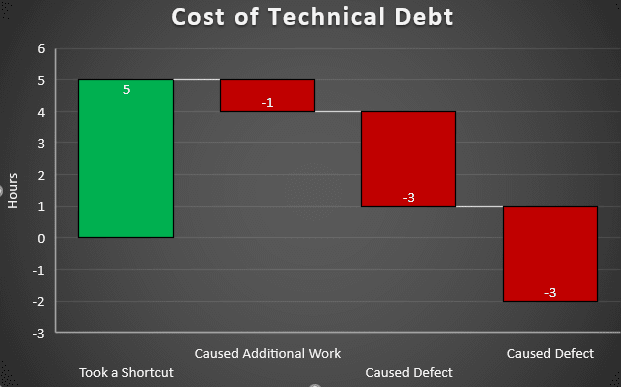 At this point the team has lost 2 total hours of productivity due to the initial shortcut – and they haven’t even started paying off the initial technical debt.

The True Cost of Technical Debt

The task to clean up the original debt rolls into the next sprint as expected.

Thankfully, nothing interferes with the team this time around and Kayla is able to pay off the debt in full at a cost of a further 5 hours of time. 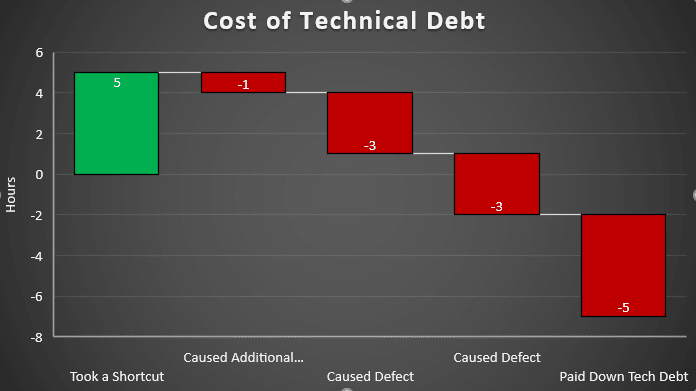 All told, this puts the total loss of productivity from taking on the decision to 7 hours lost. Additionally, the decision caused some customer facing defects, hurting user experience and trust.

On top of that, the bugs and technical debt payoff tasks have an opportunity cost associated with them. In other words, because the team was working on these items, they could not be working on other improvements to the software.

So, what does this mean? Should the team have not taken on the debt?

I would say no. This actually is a fairly ideal story as far as resolving technical debt. The debt was taken on in an intelligent and deliberate factor. Without that decision the company wouldn’t have made their date and would have lost a hundred thousand dollars in sales and deals.

Beyond that, the team aggressively prioritized the debt and the bugs that came out of it.

No, just because the debt cost the team a lot more development time, doesn’t mean it was a bad decision. But we do have to keep in mind when taking on debt that it will be far more than the productivity gain to pay down the debt – if it is ever paid down at all.

This brings us to an unfortunate truth: the story of this team fully paying off the debt like this is highly unusual.

I would argue – based on my own experience – that most technical debt does not get resolved.

In my experience, debt can – and often does – live on until a product is retired. In fact, I’ve observed severe technical debt code being duplicated and serving as the basis for future work.

If you allow technical debt to persist in your code, it will serve as the architectural basis for future code.

Most teams don’t take on technical debt as intentionally as our team did in this article. This means they’re unlikely to gain many, or potentially any, benefits from taking that debt.

Put it another way: if you had to take on 5 hours of technical debt, would you rather it to be to make a major sale or because a developer was feeling a little lazy one day?

So what are our key takeaways here?

If you’d like to learn a little more about dealing with technical debt, check out a few of my other articles:

I’d also love to hear what you’ve learned about technical debt. Let me know what you think.

The post The True Cost of Technical Debt appeared first on Kill All Defects.

How to add alias in typescript

Getting into Digital Humanities