Javascript this is full of peculiarities. Wanna figure them out? Keep reading!

My goal here is to give you an idea of how it works, and why this behaves in such a manner.

Common ideas behind this

This is a reserved word often called the function context. It is a reference to an object in which this function is invoked. No worries, we'll discuss what does it all mean in a second. Just as a warm-up, I want to show a simple example of using this. For now, without in-depth explanations.

Here you see this in action: it allows us to reference the object from inside the method when we invoke it.

But as you may have noticed, JavaScript is special. And this is not bound to anything.

Let me show you the problem:

After copying the talk method into the talk variable, our this is undefined.

If you don't know why it happens, continue reading. Don't worry if it doesn't make much sense yet.

Before we begin: function arguments vs function parameters

You might be wondering why I want to start with such an irrelevant topic. You came here because you had decided to learn about this, not about that boring little words we put inside the parenthesis.

But the real trick in understanding this is to understand function parameters.

We usually use these two terms interchangeably despite it's two different things.

Suppose have a function definition:

name is a parameter. Parameters are always specified in the moment of a function definition.

No function definition => no parameters.

Here, name is a variable containing a string. When we invoke the function, we pass this string to the function. name here is an argument.
Arguments are always linked to function invocation.

No function invocation => no arguments.

Okay, now we're ready to go. I don't want to spend hours on reflexing about that.

In our example, name is an explicit function parameter.
We declared that parameter during the function definition, and passed an argument to that function on invocation so that 'Iren' (our argument) was assigned as a value to that parameter.

This is an implicit function parameter.

This is it. Nothing less, nothing more. But wait, what's that mean?
It means that we're not declaring that parameter during the function definition. JavaScript does it behind the scenes. And when we invoke the function, it also passes an argument to the function that will be assigned to this.

There are two frequently occuring ideas:

And both of them make sense when you think about this as of an implicit parameter, because:

No function invocation => no this

The value of this depends on how we invoke the function because only at the moment of function invocation JavaScript decides what to pass as an argument to that implicit parameter.

Lets talk about different ways to invoke a function in JavaScript:

Invoking function as a function

Sounds weird, but I simply want to emphasize the case when we invoke a function as is, not as a method, not as a constructor, nor, via function's methods.

We can have three different cases.

Function declaration invoked as a function

Function expression invoked as a function

In all three cases, this is evaluated in the same way, and it depends on the current mode.
In non-strict mode, it is the global object (window in the browser). In strict mode, it's undefined.

Invoking function as a method

Suppose you have an object with a name.

Then you assing a function as a property of that object, and invoke the function via calling object property:

When the function is invoked as a method of an object, this becomes a reference to the object on which this method was invoked. That's why this is missed when you copy the object's method.

Invoking function as a constructor

Let's be precise here, too, and define a constructor function before digging any deeper.

A constructor function is a function invoked with the new keyword

Let's discuss what is going on in the case of constructors. I'm not going to talk about all the peculiarities of the constructors in JavaScript as it's a whole other topic. Reach me out if you feel you might benefit from an article about that, and I'll write one.

The Person is our constructor function. When a function is invoked as a constructor, the following steps happen:

Now, with our example: 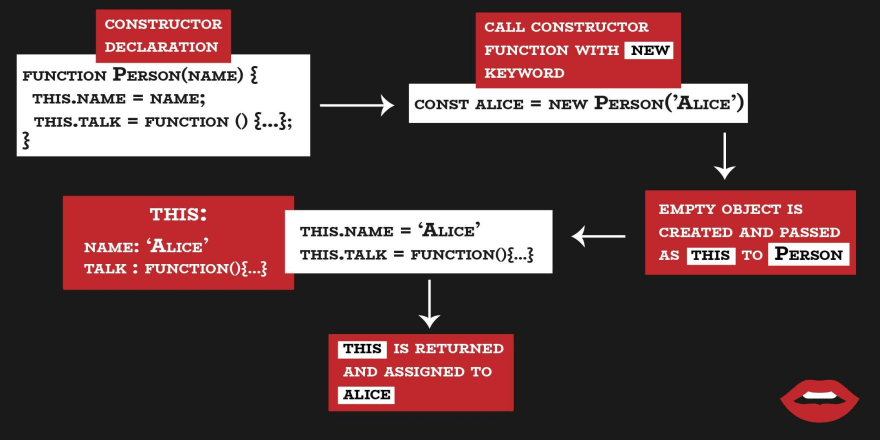 And for now, this is it for invoking functions as constructors.

Invoking function with call and apply

In this kinda crazy JavaScript world, sometimes you need to specify in which context a function must be invoked for things to work properly.

It can be especially useful when you pass a function as a callback. For example, in event handlers, JavaScript passes HTMLElement object, which triggered the event.

We have out good old constructor, a button, and a talk function. This function simply calls talk method of the current context.

Now, if we click the button, we'll see an error in the console because our this is our <button id="button">Click to talk!</button>

This is not what we were looking for. Our button doesn't know about talk method. And it shouldn't.

So welcome call and apply methods of a function.

They are two built-in methods of a function (functions are objects in JavaScript, remember):

They're doing the same thing: calling the func function with the specified context. After calling func this way, this inside this function becomes context.
The only difference is how arguments are passed. call accepts an arbitrary number of arguments and passes it to the function, while apply accepts an array of arguments.

Let's tweak our example a bit, and fix our context.

Now we have two buttons, and a talk function.
Pay attention to how we're specifying the callbacks. For both buttons, we're passing an anonymous function.

For aliceButton, we're calling the talk function specifying alice as a context. In this case, the alice object, which was created by our constructor, becomes this inside talk function.

For irenButton, we're doing almost the same, but passing iren as a context. So when we click those buttons, corresponding methods of alice and iren are invoked. 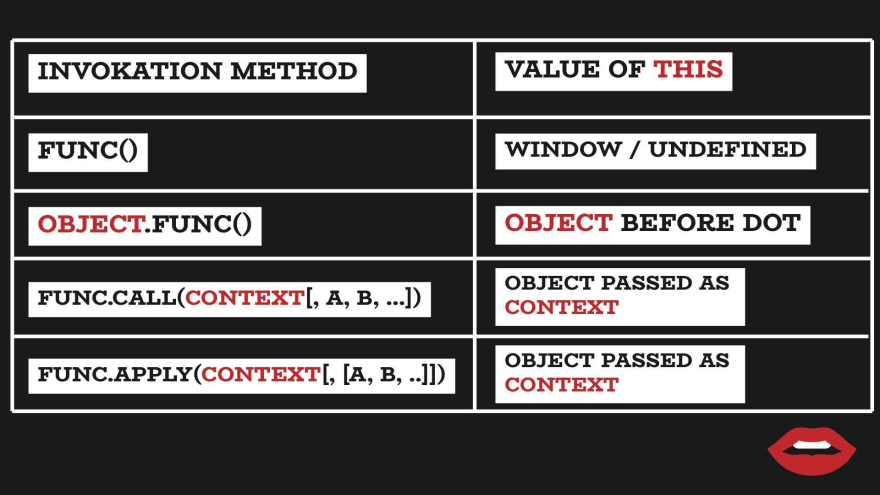 Now that we've talked about how functions can be invoked and what happens with the context in those cases, we can get our hands dirty in two other topics tightly coupled with this: arrow functions and bind method.

Before knowledge about call and apply has flushed from our mind, let's talk about another guy in the family of function methods: bind.
It looks like the call method:
func.bind(context[, a, b, ...])
But it does a completely different thing. Instead of invoking a function, it sews a function with provided context and returns this function. Let's tweak our last example:

In the example above, we:

With that in place, we can click on the Talk to Alice button and see that our context isn't lost.

So here, the bind method returns a function with the specified context attached to it. This function doesn't accept context anymore. this is alice forever.

Moreover, we can't talk with Iren anymore. When we click on the Talk to Irene button, the alert is Hello! My name is Alice..

That's because the call method doesn't do anything in the callback we provided to the irenButton.

As we discussed earlier, the call and apply methods does pretty much the same. The bind, on the other hand, is whole another beast.
It's easy to grasp the difference in the comparison table: 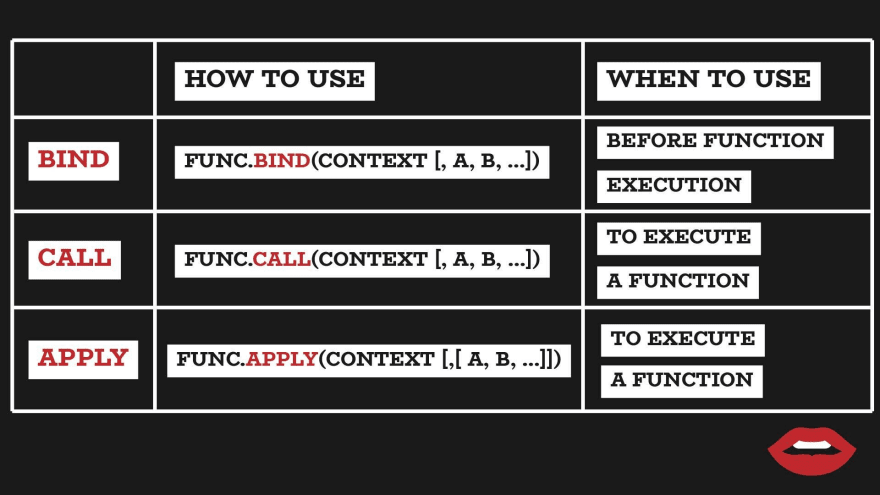 I'm not going to dive deep into all the peculiarities of the arrow functions in JavaScript, hovewer, it is a powerful feature to deal with this.

So when an arrow function is invoked, JavaScript doesn't see this parameter in the lexical environment of the current function, and check the outer scope.

For example, when you use a regular function as an event handler for click events, JavaScript passes the clicked target as this:

Hovewer, when we use arrow function instead, this is global object - the closest not-empty this:

That's pretty much it. This tutorial becomes extremely long, so it's time to wrap everything up.

Once suspended, irensaywhen will not be able to comment or publish posts until their suspension is removed.

Once unsuspended, irensaywhen will be able to comment and publish posts again.

Once unpublished, all posts by irensaywhen will become hidden and only accessible to themselves.

If irensaywhen is not suspended, they can still re-publish their posts from their dashboard.