If I'm going to build a full-featured, AI-powered, totally-awesome personal assistant bot, I need to start off with a solid foundation. Here's a post that outlines all of the involved technologies and my initial flask app set up. If you would like to see how the project looked at different stages of the process, click on the Code Checkpoint link to head to the commit in Github.

Ahh, who doesn't love typing Initial Commit to get a project going? To kick things off, I started with a basic Hello World flask app with Swagger documentation via flask-restplus. Although restplus isn't a requirement for deploying flask app, I find it much simpler to have the service provide the documentation for me. Also, it allows for testing endpoints without having to use curl or an IDE.

Virtualenv
As with any Python project, I start off by adding a virtual environment. This step is crucial in making sure that what I see on my computer is the same thing I'll see when deployed (and so that people like you can copy my code with ease).

You can read more about this method here.

Folder Hierarchy and App Structure
To be honest, I'm still learning about the best organization method for flask so that projects are easy to follow and update. Here's the structure that I have at this point:

Because Athena will have multiple components (because no one's life only pertains to one area), the api will have multiple namespaces (think folders) that will organize similar endpoints. I'm starting off with a "general" section to house all foundational api calls and activities..

After getting the project set up, this is what the app looks like when deployed locally

Alright, now it's time to push this out to the public. I'm using Heroku to host my app for the following reasons:

Pipeline
I went ahead and created a pipeline with two apps for my two development environments:

The entire pipeline is connected to my project repo, and my prod app is connected specifically to my master branch. Once the staging branch is created down the line, I'll go ahead and connect that branch to the staging app (don't want to get ahead of myself).

The prod app is set to automatically deploy with each push. However, before the first deployment, I need to add a few things to the app to make it Heroku-ready.

After adding these changes, I ran heroku local in my terminal to make sure I had everything set up right. 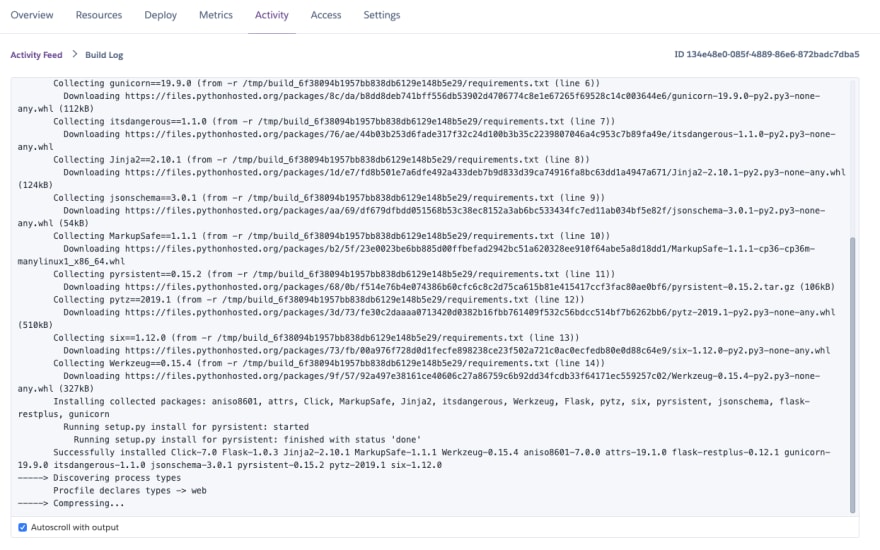 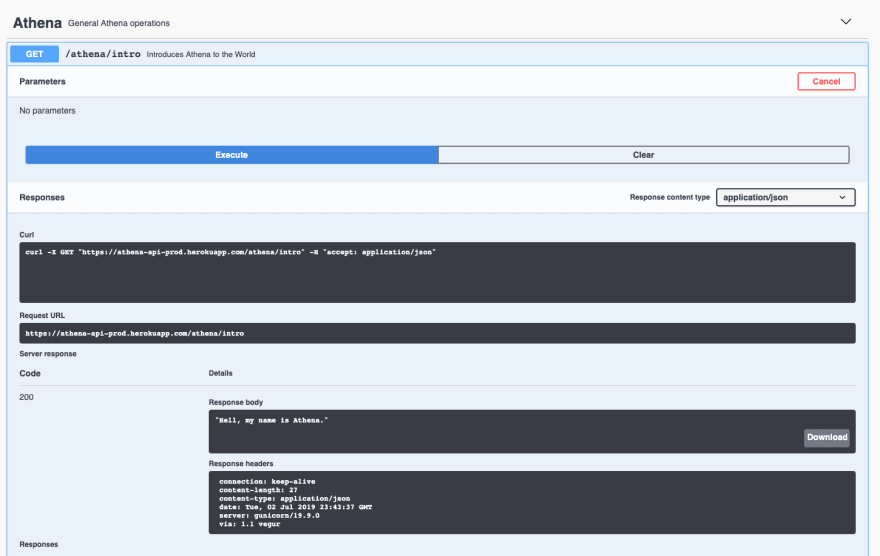 And voila! Athena is public!

One thing I've learned along my coding journey is that sooo much time can be saved by starting off a project with testing in mind. Heroku and pytest make it easy to make sure that each push is a fully functioning application.

First up, let's add a test to make sure that the app works.

Tip
If you've used pytest with a Python 3.# virtualenv before, you've probably seen the following error:

To make sure that DeprecationWarnings like this don't halt the entire app, you can add a pytest.ini file with the following:

After running pytest in the terminal, the following output is displayed.

Next step is to add the app.json file so that Heroku knows how to test the app. Afterwards, I can enable CI on the pipeline and then deploy the changes for testing. Here's what's displayed on the screen after pushing to remote.

And here's what's displayed when all tests pass.

Athena, Tell Me More about Yourself

Code Checkpoint
Okay, the set up is basically done. We have automatic deployment and testing and a solid application organization structure. To finish things out, I'll go ahead and create a staging application for any future features. Also, just to add a little spice to this tutorial, let's try to commit the first feature change so that we can get a glimpse into the power of Heroku's Review Apps.

After enabling Review Apps (inheriting config vars from the staging application), changing the response to the intro request, and submitting a pull request, an app was created and launched for me to see the changes in real time. The pull request page shows that all tests passed and gives a link to view the deployment (can also see from the heroku dashboard). 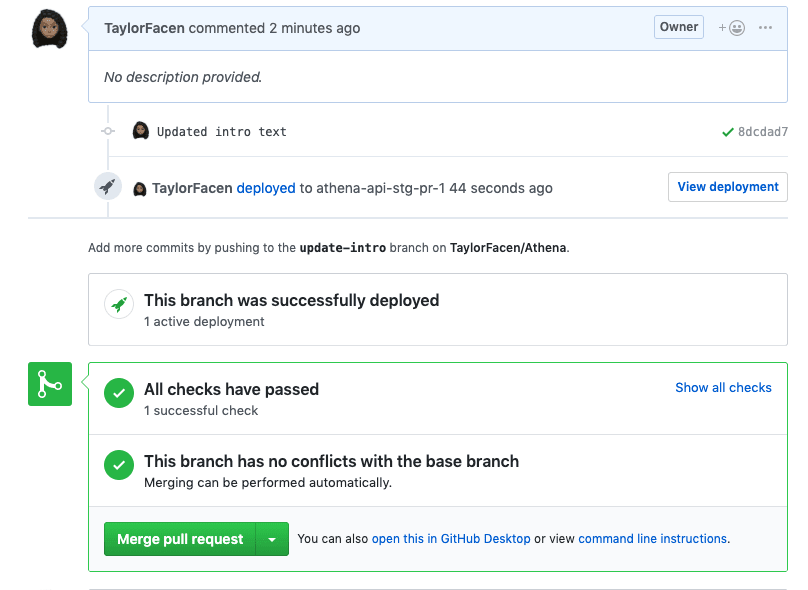 Wooh! All tests passed and my intro text was updated. Time to accept the pr, push the changes up to master, and release v0.1 of my app!

Thanks for reading along! Next, I'll program Athena to give me a wake up call every morning.

Taylor Facen
I build bots, launch data pipelines, and anything else Python allows me to do.
How I Used Twilio Autopilot to Build an Interview Coach
#twilio #autopilot #python
How to Safely Add Environment Variables to your Python App
#python
Athena, Can I get a Wake Up Call?
#python #twilio #flask

Once suspended, itstayfay will not be able to comment or publish posts until their suspension is removed.

Once unsuspended, itstayfay will be able to comment and publish posts again.

Once unpublished, all posts by itstayfay will become hidden and only accessible to themselves.

If itstayfay is not suspended, they can still re-publish their posts from their dashboard.

Once unpublished, this post will become invisible to the public and only accessible to Taylor Facen.

Thanks for keeping DEV Community 👩‍💻👨‍💻 safe. Here is what you can do to flag itstayfay:

Unflagging itstayfay will restore default visibility to their posts.