Now that the foundation of my bot is set up, I can add my first (and probably my favorite) feature - daily wake up calls. It usually takes a lot to wake me up in the morning since I'm known for hitting the snooze button at least 10 times. I might be able to solve this by having Athena call me every morning, and in order to turn the alarm off, I'll have to repeat that day's affirmation. Seems like a positive and effective way of starting my day!

The two components that I'll be adding to Athena is a Postgres database and Twilio integration. I wish this was the part where I explain my deep thought process on why I chose SQL over NoSQL. To be completely honest, I decided to go the Postgres route for three main reasons:

Integrating with Twilio was a no-brainer. Their API is easy to work with, and their documentation is extremely understandable, even for someone who doesn't have a lot of coding experience. I also appreciate that there's plenty of examples in various programming languages. I was able to use snippets from the Python examples to create almost all of the code used for the wake up call feature.

If you're like me, you HATE editing your local environment variables in your bash_profile. Not only do I have to look up this process every time, I also have a few projects with conflicting variables (e.g. the database for one project won't be the same database for another). I alleviate this headache by using a .env file that contains all of the keys and values that I'll need for my project (of course, this isn't uploaded to my repo).
.env

I then use the python-dotenv package to load all keys and values from the .env file. After this, I can access any environment variable from this file via os.environ!
config.py

Connecting to a Database

I decided to use two separate databases for my project - one for development and testing and the other one for production. This is because no matter what branch or environment code is sitting in, I want it to mimic as much of the real-life production code as possible. One alternative to this approach would be to have a database schema for development and one for testing. While this might work for small projects, I plan on having many tables grouped into schemas (e.g. tasks, budget, health, etc.).

Adding a database is easy. All I had to do was head over to the "Resources" tab on my application, search for "Postgres", and click "provision". That's it!. Now my app has a config variable called "DATABASE_URL" that can be used to access the database.

Next up, I installed Flask-SQLAlchemy, added my database's URL as a local environment variable, and updated my create_app function.

Let's go ahead and add a test to check to see that the app is connected to the database.

Alright, let's get this pushed up...oops an error. 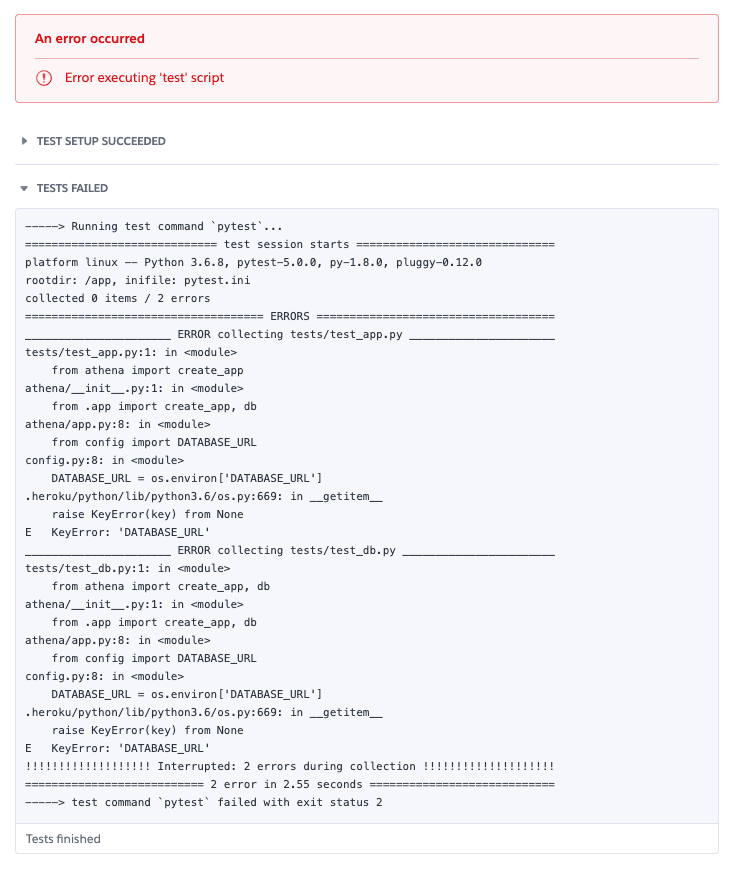 After making these changes, everything ran smoothly

Code Checkpoint
Next up, let's get some affirmations in the database for Athena to pull from. I'll add an "affirmations" endpoint with some some CRU (create, read, update, no delete) operations.

The model for my affirmations table is simple; there's only two columns: affirmation_id, affirmation

Adding the following in my app.py tells the app to create the affirmation table if it doesn't already exist.

Call me paranoid, but I'm always worried that I might accidentally delete a table. So let's just add a test to verify that the affirmations table is there.

Alright, now that that's done, I can add the code to handle any CRU operations to the affirmations table. After creating the affirmations endpoint and adding the response model, flask-restplus automatically updates the api's documentation. 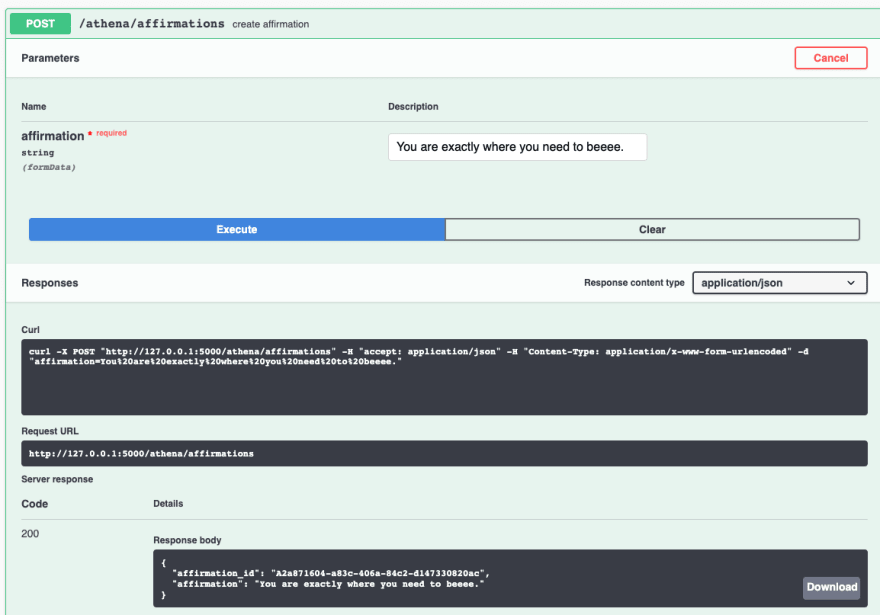 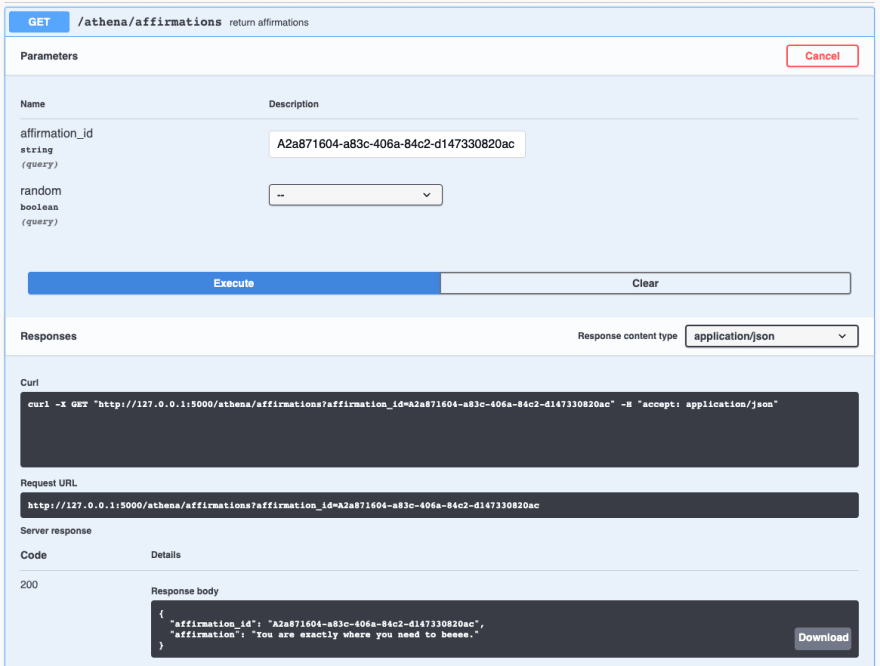 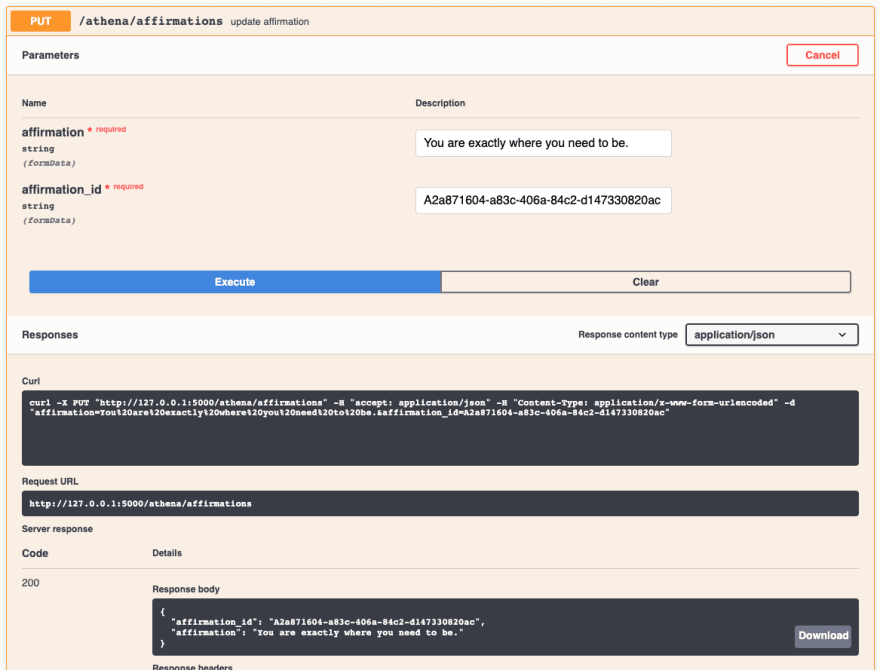 I went ahead and added tests for each operation as well. After adding in a few affirmations, we can move on to integrating with Twilio.

Alright, the moment we've all been waiting for - Athena get's a voice! The workflow of the morning call is:

Autopilot Set Up
The two Twilio services that will be used for this feature are Programmable Voice and Autopilot. Voice handles normal calling features, and Autopilot is Twilio's machine learning engine that's used to facilitate user <-> bot interactions. Most of the setup can be done within the console. However, I'm going to programmatically implement some of the setup process so that it's reproducible and tracked with version control.

To connect with Twilio, I installed the Twilio package and added the following to my .env file

The ACCOUNT_SID and AUTH_TOKEN came from my account console, I purchased a TWILIO_NUMBER with calling and messaging capabilities, PHONE_NUMBER is my personal number, and I created a Twilio Autopilot Assistant through the console and wrote down its ASSISTANT_SID. Just so that I don't forget, I'll go ahead and add all of my config variables across the two apps, test settings, and my app.json file.

I added a athena_setup folder that contains the code used to set up her stylesheet (e.g. voice style, failure messages, etc) and another to setup the wake up call task. I also added a model_build.py file that generates a new model build for the assistant. One thing I learned in this process (which hopefully will save you a few headaches) is that you HAVE to run a model build after creating a task or making significant changes to a task. If not, the assistant might not be able to parse any messages you say or text to your bot.

After adding the endpoints for the wake up call workflow, I can push up these changes to Twilio.

The overall set up was pretty straight forward. First, I added a command for initiating the call (requires the Flask_Script package).
manage.py

Then, I added three API calls to handle different aspects of the wake up call.

/route for routing the call to the correct assistant task

In order to check my response against the original phrase, there's some initial text transformation that has to be applied. First, both texts are converted to lowercase, and then all punctuation is removed. Then, I use the jellyfish package to compute the Jaro distance between both strings. If the distance is greater than or equal to 0.75 (my personal threshold), then I'll count that as a match.

Am I Awake Yet?

Although I have the best intentions for waking up in the morning, sometimes my "sleepy" self acts against these intentions. So to make sure that I just don't pick up the phone and hang up, I'll make a few tweaks so that Athena calls every 15 minutes if the previous call wasn't successful. Doing this was pretty tricky. Although it's easy to get a list of previous calls, it's not possible to check previous dialogs to see if they're successful. My workaround is that when my '/validate' API says that my response is valid, it will give that call a feedback star count of 5. Then, in my command, I'll have the calling code in a while loop that only breaks if the previous call has a feedback star count of 5.

Running the task every day

The last thing I need to do is to tell Heroku to run my task every day at a specific time. I'm going to be ambitious here and pick 5:00 AM EST (9:00 AM UTC) as my run time. Heroku makes this process really simple. All I have to do is add the Heroku Scheduler resource to my app and type the following.

Voila! That's it. After updating Athena's intro and version number and redeploying my task with my production API_BASE, I'm done!

Thanks for reading along! Stay tuned for more walkthroughs.

How to check if a list is empty in Python?

Taylor Facen
I build bots, launch data pipelines, and anything else Python allows me to do.
How I Used Twilio Autopilot to Build an Interview Coach
#twilio #autopilot #python
How to Safely Add Environment Variables to your Python App
#python
Setting up the Backend for Athena, my Personal Assistant
#python #flask #heroku

Once suspended, itstayfay will not be able to comment or publish posts until their suspension is removed.

Once unsuspended, itstayfay will be able to comment and publish posts again.

Once unpublished, all posts by itstayfay will become hidden and only accessible to themselves.

If itstayfay is not suspended, they can still re-publish their posts from their dashboard.

Once unpublished, this post will become invisible to the public and only accessible to Taylor Facen.

Thanks for keeping DEV Community 👩‍💻👨‍💻 safe. Here is what you can do to flag itstayfay:

Unflagging itstayfay will restore default visibility to their posts.