In this series we have covered arduino hardware & sensors, connecting a swimming pool to the internet, saving events to Azure Table Storage and building a PWA using Vue.

Now let's talk about interfacing the pool with google assistant!

If you want to build Google Assistant integrations, you could use Actions on Google directly, or you could check out Dialog Flow.

Google has made it simple to write conversational experiences and handle the machine learning for you. We'll just define some intents and utterances.

What is the user trying to accomplish? What is their intent? For my case, I want to know the temperature in the pool. So I created an Intent called "Water Temperature".

Next we need to defined a few training phrases. These are the things we think users will say to trigger our intent.

When a user triggers this Intent by matching an utterance, we need to send a response. Dialog Flow allows us to hard code responses, but we want real time data from the pool bot! For that we'll enable Fulfilment. We can still define a hard coded list, this will be useful if our backend service is down or being slow. 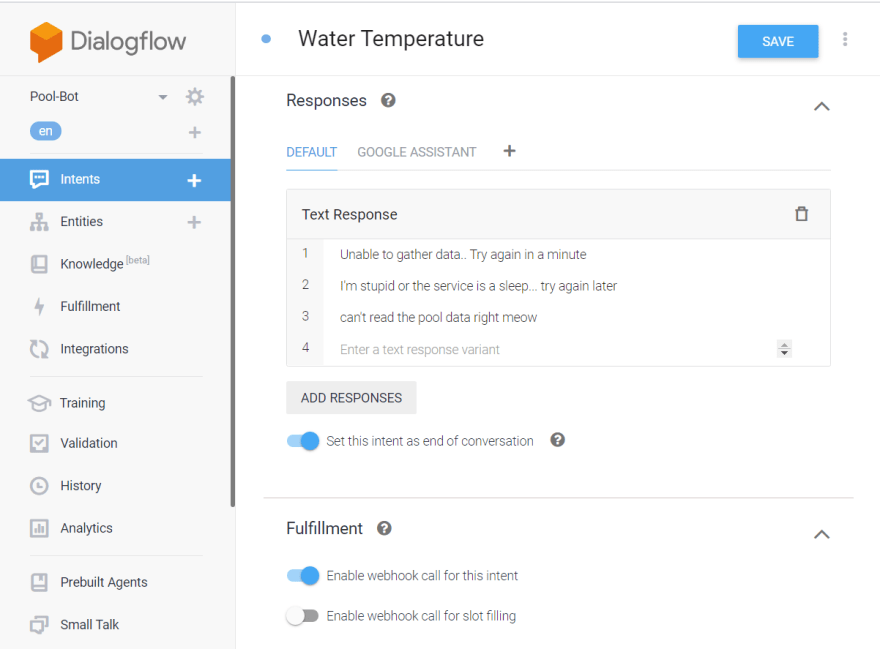 Switching over to the fulfillment tab, We'll add some webhook settings. You can dive into the docs for the full details, but basically Dialog Flow is going to POST a json object to us, and we will need to send back the response shape it's expecting. 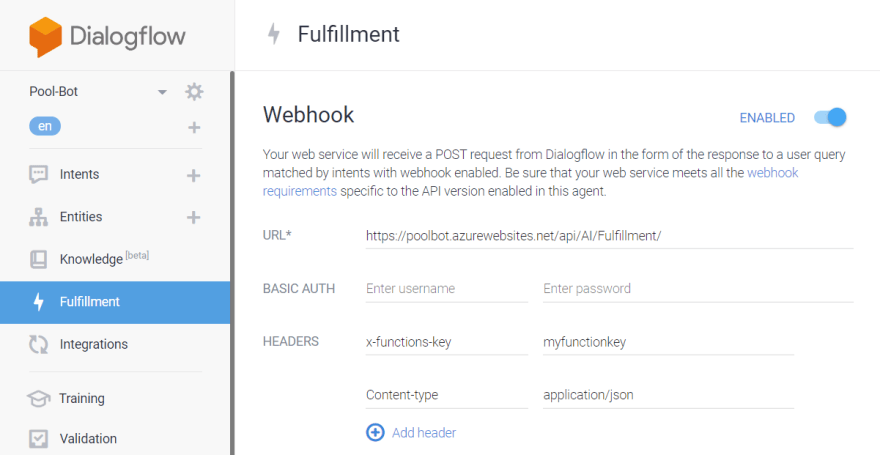 Earlier in this series we talked about Azure Functions, now we'll add one more endpoint to the backend services.

This function makes two messages and stuffs them in a WebhookResponse object. Why are we setting two objects into FulfillmentMessages? This allows us to do different things on different devices! If the user is talking to a Google Home speaker, they won't have a screen and will hear the SimpleResponse TextToSpeech read to them. If they have a Google Hub with a screen (or are using Assistant on their phone) Dialog Flow will use the BasicCard message.

Note About Google Object Serialization! For some dumb reason Google's object don't serialize correctly. If you just sent back their WebhookResponse object, you'd get an error from Dialog Flow. You need to .ToString() the response before sending it back, but keep in mind it also needs to be a json object, not a string of json. So this may look hacky, but you have to ToString, then Deserialize the string back into a object (the correct object this time!). Then we can send the response:

Here is Demo Video of this running on my Google Hub.

A custom option for the default "Choose File" button

What blue eggs taught me about the CSS Box Model

ChatGPT, the AI that answers any question

Once suspended, j4s0nc will not be able to comment or publish posts until their suspension is removed.

Once unsuspended, j4s0nc will be able to comment and publish posts again.

Once unpublished, all posts by j4s0nc will become hidden and only accessible to themselves.

If j4s0nc is not suspended, they can still re-publish their posts from their dashboard.

Once unpublished, this post will become invisible to the public and only accessible to Jason C.

Thanks for keeping DEV Community 👩‍💻👨‍💻 safe. Here is what you can do to flag j4s0nc:

Unflagging j4s0nc will restore default visibility to their posts.