As you know, Web Development has its own, special vocabulary that easily consists of several thousand terms. And as we all know, even as experienced developers we’re unlikely to be aware of all of them. Do you like to try your own knowledge again? How many of the following 33 terms * do you know?

Web Development is a great field. If you decide to follow the field’s development through the The Web Development Glossary, you get book updates automatically when obtaining your copy at Google Play Books or Leanpub. 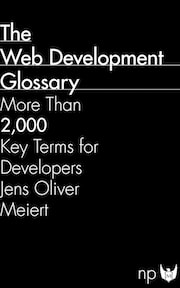 * Some explanations are based on Wikipedia, the MDN Web Docs, or the HTML Living Standard. All references are available in the Appendix of The Web Development Glossary (PDF). This post is licensed under a CC BY-SA 4.0 (Attribution-ShareAlike 4.0 International) license.

Once suspended, j9t will not be able to comment or publish posts until their suspension is removed.

Once unsuspended, j9t will be able to comment and publish posts again.

Once unpublished, all posts by j9t will become hidden and only accessible to themselves.

If j9t is not suspended, they can still re-publish their posts from their dashboard.

Once unpublished, this post will become invisible to the public and only accessible to Jens Oliver Meiert.

Thanks for keeping DEV Community safe. Here is what you can do to flag j9t:

Unflagging j9t will restore default visibility to their posts.