I couldn't like the way of "Microsoft Docs" recommended to me...

A few weeks ago, I started a new ASP.NET Core web application project.

I had to protect static files with authorization on that application, but I had no idea how to implement it at that time.

A part of those answers recommended us to try to one of the following solutions:

Especially, the solution (B) is explained by Microsoft official document site as you can see in the following URL:

However, I couldn't use those solutions for some reasons specified with the constraint of this project.

So, I continued reading the search results, and finally, I found the solution that I prefer.

The solution that I prefer is, hook the OnPrepareResponse call back point of static files middleware.

When we register the "Static Files" middleware built-in ASP.NET Core into the HTTP process pipeline, we can also specify a StaticFileOptions option argument.

StaticFileOptions class has the property of a good hook point that allows us to insert a process before serving static files.

That property name is OnPrepareResponse.

We can set a call back function to the OnPrepareResponse property, then that function will be called back before serving each static file, and we can change the response rely on authorization state!

So I copied sample code from the answer on "stackoverflow.com" (following URL), and tried it.

Of course, we have to register "Authentication" middleware at the before of "Static Files" middleware to be available detect authenticated or not.

Oh, NO! Anyone can see my secret file!

I built my sample code and run it, but... 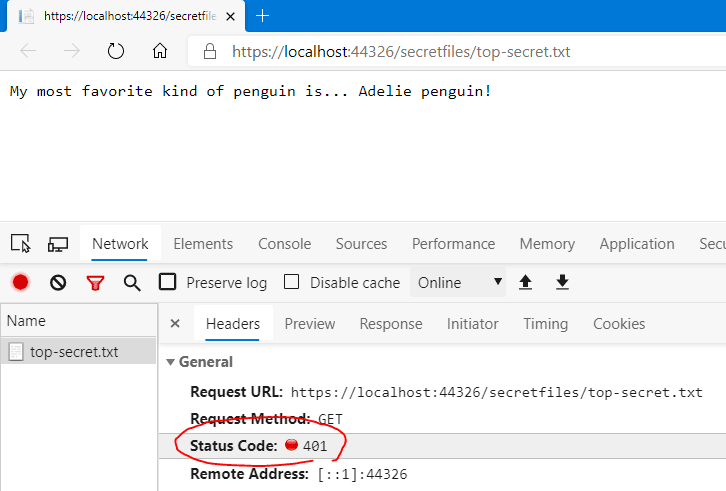 Oh, NO! Anyone can see my secret file!

My call back function exactly returned the "401 Unauthorized" HTTP status to the browser, but it didn't stop the response body!

I have to stop the entire responding!

I have to not only return HTTP 401 but stop the entire of responding.

To do this, I appended 2 lines in my call back function like this:

This code drops the writing to the stream of response body from "Static Files" middleware, because that code replaces the body stream to System.Null.

The all of contents that wrote into System.Null is discarded, and it doesn't cause any effects.

Finally, I could protect the secret static files. 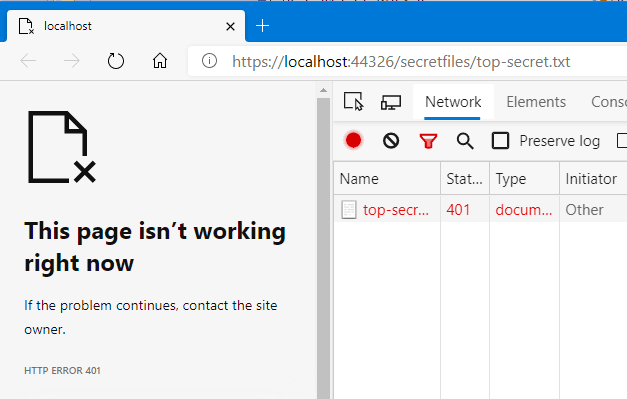 Please remember, to protect those secret static files, we have to concern browser caches.

In some cases, I could see the secret file from browser cache even if I wasn't authenticated after signed out from the application.

I avoided this problem by adding the "Cache-Control" header to the response.

If you want to redirect...

If you want to redirect to another page such as "Sign in" page instead of returning "HTTP 401", yes, you can do it by like this code:

The entire of my sample code is public on the GitHub repository of the following URL:

The live demo site is also available on the following URL:

How to develop a plugin for NopCommerce

Episode 031 - Some simple unit tests with xUnit - ASP.NET Core: From 0 to overkill