In my last post, I've talked about how to configure a development environment and how it extends a Dockerfile made for production.

Now, I would like to share how we can build upon our previous Dockerfile in a way that Xdebug can run directly from Docker and also connect it with Visual Studio Code.

By choosing this approach, we substantially reduce the amount of setup that each team member has to do on their machine to get the project up and running, which means that we can start writing code faster.

So, why is this so important? A recent research from JetBrains shows that 68% of the PHP developers debug their code using var_dump(), die(), dd() and dump(). From my perspective, there is nothing wrong with that. Even if you do it by choice and not because you lack knowledge.

I'm included in the 68% of developers debugging their code with auxiliary functions instead of using a full-featured debug solution such as Xdebug. Not for lack of knowledge but because I'm a heavy Neovim user and I didn't adapt quite well using Neovim with Xdebug, to me, is just easier and faster to use my code snippets around the dd() function.

But from time to time, I caught myself in situations where it would be faster to jump into Visual Studio Code and just use Xdebug, especially when I'm working with other people that aren't familiarized with Vim/Neovim.

Before jumping into PhpStorm, first we have to clear a few things about Xdebug to fully grasp the changes we’re going to make on the IDE. The information got first introduced on the topic about the command directive in a previous post. You will notice that at some point a xdebug.ini file gets copied from a local .docker folder into /etc/php8/conf.d/50_xdebug.ini at the container.

Even though the content of the file got shown, I intentionally didn't explain its content so that we could explore the debugging topic all at once, going all the way from configuring Xdebug to using it with an IDE.

Down below, we have the same Xdebug config file, from the previous post, placed at .docker/xdebug.ini on the root of our Laravel project. Each line of code will be explained further, but in case you want to know every configuration that you can add in this file, check the Xdebug documentation.

A Zend extension hooks into “lower level” languages, a single extension can be both a PHP and a Zend extension, despite being very uncommon it's possible and Xdebug is a good example of it.

This setting controls which Xdebug features got enabled, according to the documentation the following values gets accepted:

Controls which IDE Key Xdebug should pass on to the debugging client or proxy. The IDE Key is only important for use with the DBGp Proxy Tool, although some IDEs are incorrectly picky as to what its value is. The default is based on the DBGP_IDEKEY environment setting. If it is not present, the default falls back to an empty string.

The functionality starts when the PHP request starts, and before any PHP code getting executed. For example, xdebug.mode=trace and xdebug.start_with_request=yes starts a Function Trace for the whole request.

In case you don't want to see these logs you can comment out this line of your .docker/xdebug.ini file by changing the line to ;xdebug.log=/dev/stdout.

Configures which logging messages should be added to the log file. In here we are instructing Xdebug to log only errors in the configuration, in case you want to see more information you can use the level 7 for log info or the level 10 for log debug.

The port to which Xdebug tries to connect on the remote host. Port 9003 is the default for both Xdebug and the Command Line Debug Client. As many clients use this port number, it is best to leave this setting unchanged.

Down below, you can see how to correctly get your IP address in the main OS developers use. In case you are using a different OS, the commands may serve you as base to try to extrapolate a solution for your use case.

In summary, you've instructed Xdebug to start from a request and try to send the debug events to the host with the IP 192.168.0.158 on the port 9003. Since the IP represents your computer, these means that when configuring Visual Studio Code to connect into Xdebug, the configuration will be extremely similar to when connecting to the localhost.

As you may already know, Visual Studio Code or, VSCode for short, is a source-code editor made by Microsoft for Windows, Linux, and macOS. Features include support for debugging, syntax highlighting, intelligent code completion, snippets, code refactoring, and embedded Git.

With that being said, you may be wondering… what do we need to have VSCode with all the aspects of an IDE with full-featured debug?

For starters, we will need to install the PHP Debug plugin from Felix Becker: 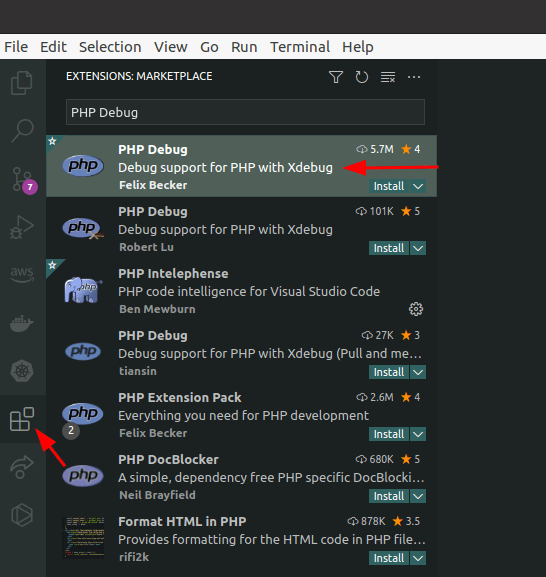 Thereafter, a file called launch.json have to be generated, this file gets used by the debugger in any language, which means that a part of this process can be reused when configuring the debugger on VSCode for other languages.

You can generate the file by clicking in Run and Debug > create a launch.json file > Docker: Debug in Container, as the following screenshot shows:

Finally, the launch.json file will be created with a specification of version and an empty configurations array, just like the next screenshot shows:

Now, to properly configure the launch.json file you have to add in the configurations array an object with the properties name, type, request, port, and pathMappings which will leave you with a file looking like this:

Indicates the name given to a configuration object.

Indicates the underlying debugger getting used.

Indicates whether the configuration is intended to launch the program or attach to an already running instance.

Indicates the port on which to listen for Xdebug

Indicates a mapping of server paths to local paths.

I encourage you to leave this launch.json file with its content in the project, so other team members can just clone the project, run the containers and enjoy a full-featured debug solution running in a container environment.

Use Docker to build better CI/CD pipelines with Dagger

Make a simple nav-bar with Laravel and Bootstrap

How to run Azure CLI with Docker

Once suspended, jackmiras will not be able to comment or publish posts until their suspension is removed.

Once unsuspended, jackmiras will be able to comment and publish posts again.

Once unpublished, all posts by jackmiras will become hidden and only accessible to themselves.

If jackmiras is not suspended, they can still re-publish their posts from their dashboard.

Once unpublished, this post will become invisible to the public and only accessible to Jack Miras.

Thanks for keeping DEV Community 👩‍💻👨‍💻 safe. Here is what you can do to flag jackmiras:

Unflagging jackmiras will restore default visibility to their posts.